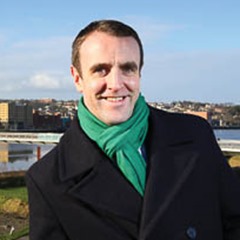 The new councils must provide the best possible service to residents, Mark H Durkan contends, despite the financial challenges ahead. The Environment Minister discusses the final steps in local government reform with Owen McQuade.

Local government reform is fundamentally about “improving services for local people,” Environment Minister Mark H Durkan states as he discusses the final stages of the transition to the new councils. The landmark transfer of planning will bring that power closer to citizens and hopefully “make it more responsive to the needs, desires and ambitions” in local areas.

Durkan is speaking just after chairing the second meeting of the Partnership Panel, set up through the new Local Government Act to act as a discussion forum for ministers and council representatives.

“It’s to provide an opportunity for a discussion at a political level about potential problems and existing problems,” he remarks. The panel will continue in existence after reform takes effect on 1 April. It’s a good opportunity for councils “to air their concerns” and also to get a formal input from ministers whose responsibilities are transferring to local government.

He expects economic development to be very much part of community planning. Councillors see the new system as a chance “to do something with the real and meaningful participation of other statutory bodies” as well as with NGOs: “They will have a real opportunity to shape where they live and where the people who elected them live.”

Asked whether too much emphasis has been placed on planning, Durkan reaffirms that it has been the big issue. When he was a member Derry City Council, some of his colleagues were “rubbing their hands and almost threatening planning officers who had come to council with an opinion on how an application should proceed or otherwise.” Councillors had looked forward to the day when they would have that power but some of them are now regretting their initial enthusiasm.

“There’s certainly been a realisation that with the power will also come a huge responsibility,” Durkan adds, “and therefore given, I suppose, the contentious and often controversial nature of planning, it’s no surprise that there has been an awful lot of focus [on this area] within councils and among councillors and also among the wider public.”

The Minister emphasises that local economic and tourism development as real opportunities to use planning effectively.

Area plans should be expressions of the community plans drawn up with the input of councillors, residents and statutory agencies. He is well aware that some aspects of reform still need to be delivered.

There is a real sense of urgency and some of the councils are “nervous” about functions being handed over to them and indeed “angry” about the budgets.

Some councils think that that off-street car parks (due to transfer from the Roads Service) have not been adequately maintained but Danny Kennedy takes a contrary view.

“Due to the wider climate, economically and financially, there are obviously huge challenges facing local government as well as central government,” Durkan reflects. The department is being expected to make an overall cut of 10.7 per cent in its resource expenditure i.e. down from £116 million to £104 million.

Grants to local government make up over 40 per cent of that budget and he lobbied the Finance Minister to ringfence it. Local government is approaching a “very exciting time” when the new councils should be empowered “rather than emasculating them.” 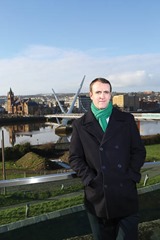 The rate support grant, which will be most affected, goes to the councils with the lowest incomes. “Not only will cuts to my department’s budget have an adverse impact on local government, that impact will be disproportionately adverse on those who can least afford it,” the Minister warns.

Chief executives and shadow councillors have been working hard and he welcomes their participation in the department’s capacity training programme and other training activities sourced by councils. The new authorities will not be “on their own come 1 April” and the DoE will, for example, retain an oversight role in the planning system, helping them to administer that new system.

Local government was traditionally was seen as a vehicle to provide jobs. Durkan acknowledges that point, noting that Derry City Council is one of the largest employers in the North West. It will be difficult to “insulate” local government from the widespread redundancies due to take place over the next Budget period.

“The importance of the councils – and the direction that councils take – to the local economy can’t be understated,” he adds, “and I think that importance and relevance is something that will increase with the new responsibilities that the new councils have, the new competences they have, and hopefully the new confidence that they have.”

Reflecting on the wider financial challenges facing the Executive, the Minister notes that spending cuts have been delayed until they will “hit really, really hard.” The DoE currently has 2,700 staff. Five hundred staff will leave through redundancies and their jobs will be “lost for the next generation”.

He’s sceptical about whether the “magic bullet” of lower corporation tax will provide enough jobs for all former civil servants. There will be a “vacuum” between the legislation for and the lowering of the rate. His fear is that many people who are offered a redundancy package will emigrate and take their skills out of Northern Ireland.

“It’s difficult to look at this in any other way,” he comments. “There are those who have sought to package it in some sort of positive wrapping paper but I don’t think it can be.”