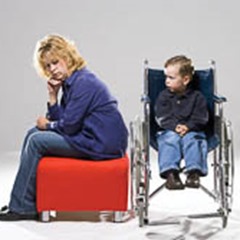 As the welfare reform debate continues, agendaNi outlines the key facts and trends for social security in Northern Ireland.

Many people claim more than one benefit as the system covers a range of circumstances. The main benefits for the working age population are as follows:

2. employment and support allowance supports people who cannot work due to illness or disability or have returned to work (succeeded incapacity benefit when it closed to new claimants in 2011);

3. income support and housing benefit rates vary according to a person’s circumstances but the claimant’s savings must be under £16,000;

5. carer’s allowance supports carers aged 16 or over who spend at least 35 hours per week caring for an ill or disabled person (paid out at a single rate of £61.35).

For pensioners, pension credit tops up the state pension for people living on low incomes while attendance allowance supports disabled people aged 65 or over who require care or supervision. Pension credit rates vary from £16.80 to £226.50. Attendance allowance is paid out at two different rates: £54.45 and £81.30. Most benefits are paid out by the Social Security Agency although housing benefit is administered by the Housing Executive. 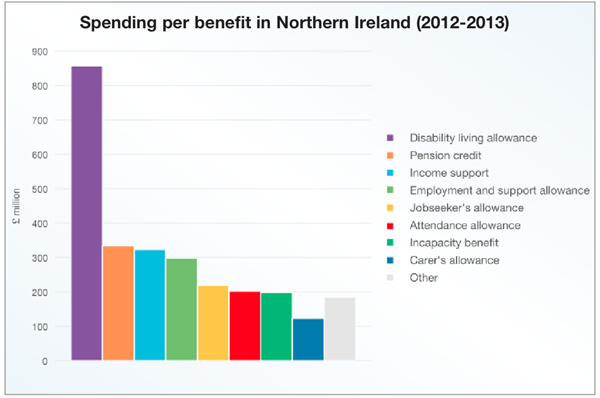 The Coalition Government states that its welfare reforms will get more people back into employment and cut the deficit. Opponents contend that the new tests for disabled people are insensitive and the changes will increase hardship for poorer households. Four main changes have been taken forward:

2. the benefits cap – covers a range of benefits but does not apply to disabled people and working tax credit claimants (£350 per week for single adults with no children and £550 per week for lone parent households and couples);

3. the under-occupancy penalty – labelled as the bedroom tax, this restricts the eligibility of housing benefit (householders can generally claim for one bedroom for each person or couple and rents are reduced by up to 25 per cent when this is exceeded);

Personal independence payment, the benefits cap and the under-occupancy penalty were introduced in April 2013. Most DLA claimants will move to PIP from October 2015 onwards. To date, 59 per cent of PIP applicants have been assessed as eligible for the new benefit. Universal credit has been trialled since October 2013 and is due to be fully implemented by 2017.

Northern Ireland’s three main exemptions are payments to both parties in the household (instead of a single payment), making payments twice a month instead of a monthly payment, and the direct payment of housing benefit to landlords.

Welfare cuts is a contested term. It is true that welfare reform is reducing or ending some payments to individuals – but the overall budget is still rising. The Executive’s allocation for social security has increased from £5.1 billion to £5.6 billion since the Coalition Government came to power. Actual payments increased from £4.3 billion in 2010-2011 to almost £4.7 billion in 2012-2013.

Tabloid newspapers regularly claim that benefit fraud is widespread but in Northern Ireland official error often results in more losses than fraud. This was the case in 2007, 2008 and 2010. Estimated fraud fell from £20.5 million to £15.9 million between 2010 and 2012. Losses from customer error increased from £6.5 million to £13.1 million. Official error decreased from £21.2 million to £12.7 million over the same period.