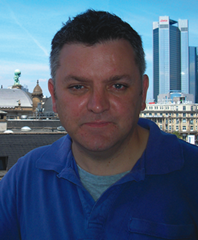 Ireland correspondent for the Guardian and Observer newspapers, Belfast man Henry McDonald began his career in the Irish News. He has written extensively on the Troubles, including books on paramilitary groups. In his 13 years with the Guardian he has looked at a variety of local topics of interest to a UK-wide audience.

How did you get started in journalism and how did you make your way to being Ireland correspondent for the Guardian and Observer?

I began while a student at Queen’s University working on ‘The Gown’ newspaper. However, I was also working on a BBC youth training scheme for radio while I was a student and in the mid-80s I was filing reports for the youth music and current affairs show ‘The Bottom Line’. In relation to the latter I am deeply grateful to Davy Sims, ex-BBC producer, who gave me my break in radio and generated an interest in journalism.

My ‘journey’ then went from freelancing in Dublin for the Irish News, then as a staff reporter with the paper back in Belfast (many thanks also to Terry McLaughlin and later Nick Garbutt). In 1992 I went to Dublin again and joined the staff of the Evening Press. Just under two years later I was recruited to the BBC as one of their security correspondents and then after a two year stint in television and radio I was working for the Sunday Times. In 1996 I also became a contract reporter for Channel 5 News doing special reports from Ireland for the network. In October 1997 I joined the Observer under Will Hutton and three years ago I came onboard the Guardian.

At present I am joint correspondent in Ireland for both papers although the bulk of my work today is for the Guardian newspaper and Guardian Unlimited. After almost 13 years my work for the Guardian Media Group has been the longest stint in my journalistic career.

What does the role of Ireland correspondent involve?

Firstly, it is covering all of the island, North and South, both states. So given that geo-political spread, the work is varied and different. The best way to illuminate this is via a few examples.

At present I am preparing a large piece about the status of asylum seekers in the Irish Republic. This entailed interviewing a number of asylum seekers, speaking to the Department of Justice and the Irish Refugee Council. It took a few days to piece together but will stand alone in the Guardian on a whole page.

Of course the other side of the work beyond those special features are the day to day daily news stories. These can range from a Dublin gangland killing to the latest republican dissident attack on a police station. And they can be about ‘lighter’ topics also such as the recent controversy over Marian apparitions in Knock.

Secondly, you are required to write across all sections of the paper and website. This could mean filing a story on the state of the Irish banking system for Guardian financial pages or writing a political blog on what is going on within unionism for Guardian Unlimited Politics.

Finally, because the Guardian is at the cutting edge of digital age journalism you are required to record podcasts, which are normally two-way interviews with someone in the London office recording studio. You also have to cut the odd audio or radio package for online (we did 32 minutes on the Saville Report in Derry recently) and ultimately produce or present online films which will be broadcast on Guardian Unlimited.

How do you decide which stories are interesting to a UK-wide audience, and how is Northern Ireland viewed in Great Britain?

Well, the Guardian is committed to stories from Northern Ireland and the Irish Republic. Obviously if there is a British angle to them that makes them more likely to get into paper. But remember, the Guardian is more than just a conventional 3-D newspaper. It is prevalent in cyberspace with Guardian Unlimited which is increasingly important and influential.

Stories this year that got massive hits on the website included the Iris Robinson affair and the Saville Report into Bloody Sunday. The Guardian does not underestimate or dismiss the intelligence of its readership. They do take an interest in all things Irish. The trick is to strike a healthy balance and not always concentrate your attention on politics, security and crime stories. There has to be some light as well as the shade.

How does the Guardian’s leftliberal viewpoint influence how it covers Northern Ireland?

Reportage is reportage. It doesn’t change because of the paper’s left-liberal editorial line. Obviously there are issues which concern a left-liberal publication such as the plight of asylum seekers, North and South, or the assault on civil liberties by the state.

What conclusions have you drawn from reporting on 20 years of the Troubles?

More than 25 years actually! Well that is a big question. In terms of journalism we are all coloured by our backgrounds, our upbringings.

The key thing though is to be wedded to truth or at least track the truth as closely as possible, even when the truth is uncomfortable. Short of a report putting someone’s life at risk (which would be indefensible and immoral) no truth – no matter how inconvenient – should be looked over, even if it is not helpful to the peace process.

What do you enjoy most about journalism?

People! Meeting people and hearing their stories and their lives. Listening to them is absolutely vital.

Besides that there is the variety. Last week I was out on the Atlantic in an Irish naval vessel while this week I write these answers just hours after attending Alex Hurricane Higgins’ funeral.

Going to Goodison Park on Merseyside with a few mates, having a few beers in one of the bars around the ground and then on to watch Everton – hopefully – win! That is when I am most happy and relaxed. Besides that, a cool beer, a good book and Spanish sunshine on the beach does it for me.