New MEP for Northern Ireland, Naomi Long talks to David Whelan about the nature of her expectation exceeding win in the European elections, the Alliance surge at local government level and her outlook on the Stormont talks process.

For the experienced politician, the mandate given to Naomi Long by an 18.5 per cent share of voters in Northern Ireland is clear: “stop Brexit”. Long, who has served as a councillor, MLA, MP and now MEP is among the cohort of MEPs elected across the UK who remain unsure about their length of tenure in Brussels, which is dependant on the Brexit outcome, but is not about to adopt a ‘wait and see approach’.

Fresh from her inaugural visit to Brussels as an MEP, the Alliance Party leader nursed a hoarse voice in her East Belfast office, unwilling to not accommodate a busy schedule of interviews for that day, including a Finnish TV crew and EU-based news outlets.

Brexit was the one-item ticket on which the European elections in Northern Ireland were contested and while Long recognises that her unprecedented success, eventually taking the second seat despite only being thought of as ‘in contention’ for the third seat, can be credited to the “consistent and practical” approach by the party, she believes that the final outcome was also a result of electoral momentum.

Having taken over the party leadership in 2016, Long navigated the party through two snap elections both for the Assembly and Westminster. While the party failed to increase their seats in either parliament, there was an evident growth in their vote.

She credits the party’s members and candidates in their work on the ground to ensure to continually grow the vote, resulting in Alliance now being represented in 10 of Northern Ireland’s 11 local authorities.

Suggesting that this was significant to her own electoral success, she explains: “The local elections represented a breakthrough, particularly in the west of Northern Ireland. For the first time in a long time many people who voted for Alliance actually got Alliance and I think that encouraged people to change their vote in the European elections.”

Long also says that frustrations around the Stormont stalemate were evident on the campaign trail, believing that the Alliance Party’s “clear message” on the need for politicians to compromise in finding solutions “to deliver both the rights that people deserve and the rights that they need”, was to their advantage.

In a similar vain, the MEP outlines the party’s desire to stop Brexit through a people’s vote, with no deal taken off the table, argued “clearly, consistently and pragmatically” found a base of support among the Brexit “chaos”, which has previously seen Northern Ireland’s representation in Europe take “ideologically opposed positions”.

Long admits that her 106,000 first preference votes is a considerable shift for the party, who for a long time “fought EU elections out of principle and lost our deposits”, but believes that their consistency has been rewarded: “£5,000 to have your name on the ballot paper because you are pro-Europe is a good sign of our dedication,” she laughs.

Given the sizeable chunk of first preference votes, transfers did not play as vital a role in the MEP’s election success as was previously expected, however, she believes that those that did count came from a broad base of voters. Undoubtedly, unionists unhappy with the direction of Brexit switched their vote to the Alliance, as shown by the Ulster Unionist Party decline, however, Long suggests that an unprecedented flexibility in voters’ transfers this time around represents a willingness by voters to put their constitutional position on the shelf, in favour of finding a solution to day-to-day issues.

Describing this as a positive step, Long bemoans the existence of what she describes as “entitlement politics” in Northern Ireland, suggesting that identity politics has facilitated lazy politics, where the largest groups are not under pressure to attract votes. 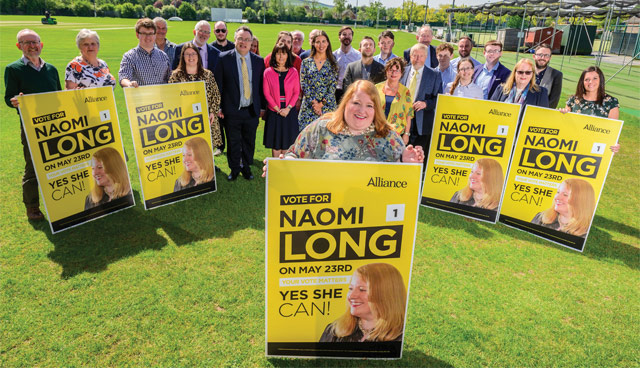 “This disempowers the electorate, who, even when wanting change, feel compelled to vote for the same party even though they are not happy,” explains Long. “We’re seeing a switch away from voters hoping the party will change to voters changing their vote for the party.”

Probably most significant for Long is that through an MEP seat, for the first time ever, the Alliance Party, which has previously had to be selective about where it stands candidates for an Assembly election, can claim to have a representative for the totality of the region.

“That opportunity to represent people and to showcase what Alliance can deliver is really important for us as a party and for changing the dynamics of politics,” she adds.

Turning to the form that that delivery will take, Long says that she is hoping to build on past relationships, having worked with both of Northern Ireland’s other MEPs in different levels of government, to find common ground and a coherent voice in representing and protecting the region throughout the Brexit process.

Quizzed on whether the level of work she and her party have put into winning the seat might be in vain if a deal is agreed by the October deadline and the UK’s MEPs are withdrawn, she says: “I don’t believe that any work representing and highlighting the case of Northern Ireland is in vain, however long it lasts. Although, given the unique circumstances it is important that I hit the ground running and deliver as much as we can in the window of opportunity.

“This doesn’t necessarily mean only in Brussels. I have already had invites from across Europe, the UK and Ireland to discuss the various Brexit impacts on Northern Ireland and those opportunities are ones I intend to grasp with both hands. The better informed the UK electorate as a whole is, the more likely we are to achieve a people’s vote to deliver a result.”

Long adds: “I also think that by educating people around the acute nature of Northern Ireland in the context of Brexit, there is a greater likelihood of a softer Brexit if it goes ahead. At the moment the only voice from Northern Ireland in Westminster is the DUP voice and they have prioritised the removal of the backstop above not having a hard border. That’s not the perspective of the majority of people in Northern Ireland and we need to make it clear to parliament that this is not a constitutional debate but a practical one for people living and working here.”

Long’s initiation in Brussels has been guided by the Liberal Democrats leader in the European Parliament, Catherine Bearder MEP and her office. Having also gained electoral success through a campaign to stop Brexit, the Lib Dems and Long will both be members of ALDE Party Group (Alliance of Liberals and Democrats in Europe), the third largest grouping and which holds the balance of power between left and right in the Parliament, along with Fianna Fáil.

Rather than join with the UK liberal delegation, Long will instead act as an individual regional delegate, granting her a seat at the ALDE table as a delegation leader. She accepts that this is a “technicality” in many ways but believes it is important to maintain the neutrality of her position, allowing her to work with liberal parties but also with other relevant parties with similar Brexit interests in the Republic of Ireland and Great Britain.

Long highlights the value of working alongside the Liberal Democrats in that their voters will be crucial in swinging any future elections across Great Britain. In ALDE, she gains significant clout when it comes to the EU Parliament. With her two permanent and two substitute committee places being negotiated through ALDE, that the group holds balance between Parliament’s left and right, stands her a good chance of attaining her preferences of a place on the Agriculture and Rural Development committee and the Environment, Public Health and Food Safety committee. Her preference for substitute places are in the committee on Human Rights and the Environment, Public Health and Food Safety committee.

As well, ALDE have extensive existing networks, offering Long a greater chance of being heard in plenary and have significant support staff, including for the likes of research. Aside from these, the MEP is negotiating with ALDE officials, through the Lib Dems, to try to secure a place on the ad hoc Brexit committee, with the UK party seemingly open to facilitating a Northern Ireland voice taking part. 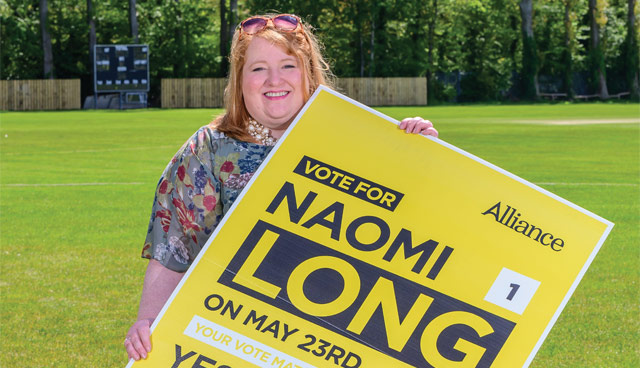 Quizzed on whether Brussels has somewhat shifted her focus from the ongoing talks to restore devolution at Stormont, Long highlights both her personal involvement and constant contact with the party on a daily basis around developments at Stormont. However, she also believes that her work around Brexit will be just as influential on the future of Stormont as the talks process.

In fact, Long believes that Brexit and the diametrically opposed positions taken by Sinn Féin and the DUP had placed sufficient strain on the Executive in 2016 that collapse was almost inevitable. “Had it not been RHI, something else would have brought the Executive down,” she states. “I believe getting Brexit resolved is part of the key to unlocking the Stormont deadlock,” she stresses.

Long does not believe that even in the event of both Brexit being resolved and Stormont being re-established that these in themselves will offer a panacea to Northern Ireland’s problems but adds: “What it will offer is confidence to the electorate that the people they voted for are working to the mandate they were given. This is critical at a time when confidence in politics is at a low ebb.”

The Alliance Party Leader is not ignorant of the challenging environment in which the current talks process is taking place, including Brexit and the absence of a UK Prime Minister, admitting that she sees the “odds stacked against” a successful outcome, but stresses her party’s commitment to delivering on the “window of opportunity” now opened.

“This is about political will and I believe that while Brexit is a threat to the Assembly and to Northern Ireland, having that Assembly would offer the opportunity of a coherent voice.”

Highlighting that Northern Ireland’s two major parties have only ever grown further apart since a jointly-penned letter by then First Minister Arlene Foster and deputy First Minister Martin McGuinness to Theresa May, outlining areas of major concern for Northern Ireland, Long believes that an Executive could go some way to influencing Westminster’s Brexit process.

“The talks have been constructive, probably more constructive than productive at this stage but they are intensifying. It’s looking more like an exchange of views, which is a positive sign. Whether we have the time to be able to get an agreement over the line is questionable but if people are serious about it, it can be done.”

Long believes that the negotiations and how the negotiations are carried out will act as a test-bed for confidence in any future Executive for the smaller parties. Discussing her well-voiced beliefs that smaller parties were largely excluded from the previous Executive by the actions of Sinn Féin and the DUP, she says: “For all five parties to properly engage in an Executive there remains a confidence issue. The talks and inclusivity in negotiations can help with this. The other thing necessary is a change or protocols. We would like to see political challenges identified early and discussed inclusively at leadership level, rather than the carving up of quick political fixes.

“I think this would create a much more stable context in which to do the regular business of government.”