Phoenix Energy Holdings’ Group Chairman, Peter Dixon, talks to agendaNi about building Northern Ireland’s gas industry from scratch over the last 25 years and how the company is well placed to meet the challenges associated with decarbonising the energy sector over the next 25 years.

Reflecting to 25 years ago, when there was no gas industry in Northern Ireland, Dixon compares the creation of such a large and complex industry, using only private money, as equitable to the electrification of Northern Ireland in the 1950s or the railway building of the previous century.

Twenty-five years on and Phoenix Natural Gas is one of the largest businesses in Northern Ireland, having built around 4,000km of gas network, making gas available to around 350,000 properties in doing so, with new connections averaging around 10,000 per year across that period.

The supply chain has developed to employ some 2,500 people locally and Dixon believes that the Phoenix story is “a great example of how you deliver public policy objectives with private sector money in a way that works for everyone”.

On the daunting task of getting the industry off the ground, Dixon says: “Starting out, we never really stood back and considered how big the task was. Perhaps we were somewhat naive at the start but we got things moving forward by taking each challenge in turn and constantly innovating.”

The Phoenix Group Chairman believes a key element of the industry’s progress has been the development of the people in Phoenix and beyond. By this, Dixon points to inclusion of “the wider Phoenix family”, which stretches to over 450 independent companies that make up the natural gas sector and the importance of keeping the structures within the business flat, “maintaining excellent relationships with key stakeholders and fostering a collegiate culture with colleagues and the communities we serve alike.”

Dixon believes that this approach positions the company well to tackle an issue that will dominate core business workstreams in the coming years and is of critical regional importance: the decarbonisation of the Northern Ireland economy.

“Our business plan, with several iterations over the years, has developed the industry we see today and it is still growing each year. Over this period, we have collaborated with a number of partners across several sectors. Looking to the next 25 years we will need to further expand our key stakeholder and partner relationships to reflect the increasingly broad reach of solutions and sectors that will be involved in the delivery of net zero outcomes.”

Government also remains a key stakeholder for the decarbonisation journey, as it was when Phoenix and its partners were developing the gas industry. The introduction of natural gas to Northern Ireland remains a relatively inexpensive step in the decarbonisation journey with homeowners who convert to natural gas from oil or coal reducing their carbon footprint by up to 50 per cent as a consequence. 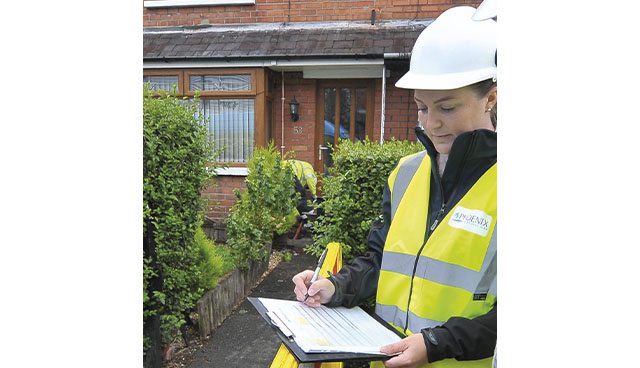 “Our business plan now sees natural gas being progressively replaced by renewable gases. That also offers the opportunity to support the decarbonisation of additional sectors such as agriculture and transport.”

The Northern Ireland gas industry now has a footprint right across the region, with an additional two distribution network operators contributing to an overall investment of over £1 billion to date, making gas available to around 550,000 homes and businesses with 320,000 of these already having made the move to the lower carbon fuel. However, across Northern Ireland there are still around 230,000 homes and businesses that have gas network available to them that remain using oil. Dixon sees this as “an easy, no-regrets move to get them onto natural gas and as well as reducing their carbon footprint immediately, creating a pathway for future full decarbonisation as the natural gas flowing into their homes and businesses is replaced by renewable gases in the future”.

In developing innovative low and no-carbon solutions, such as biomethane and hydrogen, existing links to academia will continue to be important, providing opportunities for strengthened relationships with the likes of Queen’s University Belfast. Dixon believes that such collaborations will be vital in getting renewable gases into the Northern Ireland gas network. “Our business plan now sees natural gas being progressively replaced by renewable gases. That also offers the opportunity to support the decarbonisation of additional sectors such as agriculture and transport.”
The potential for biomethane production from Northern Ireland’s agriculture sector is significant, equivalent of up to 80 to 90 per cent of the networks current requirements.

“The new skills required for the next phase are really an extension of the skills that exist in the independent companies that currently install natural gas.”

Looking to new hydrogen technologies, Dixon says that: “We need to make the transition without a fuss. We will be relying on our existing partners who built the gas industry in Northern Ireland and also looking to new partners, particularly those that recognise the circular opportunities that hydrogen production provides to the resilience and affordability of an integrated energy system.”

Dixon came to Northern Ireland in 1997 from British Gas, who at the time provided downstream services to energy users as well as core network responsibilities. However, in viewing the gas industry in Northern Ireland as an eco-system, he recognised that this approach would not fit correctly. “We didn’t want to do that. Northern Ireland has a rich resource of indigenous SMEs, often family-based businesses whose reputations are embedded within their communities, and we wanted to empower these local companies to embrace our wider ambitions, recognising the sense of ownership and efficiencies that this model would provide both then, and equally to the consumer facing considerations that decarbonisation will provide.”

Phoenix is now talking to its existing partners about its future plans and how they can help the gas utility achieve its new goal of decarbonising the gas network by doing things like installing hydrogen-ready boilers. Dixon explains that they have “leapt at the opportunity”.

Investing in the future

The Phoenix Group Chairman acknowledges that decarbonising the gas network will require significant investment but sees opportunity in parallel with the investment over the past 25 years.

“The availability of a modern gas network provides Northern Ireland with an enviable starting place from which to now progress to the next stage of energy transition, the displacement of natural gas with renewable gas solutions.”

“For instance, there are now over 70 AD [anaerobic digestion] plants in Northern Ireland however we will need multiples of that investment to optimise the opportunities that exist to convert our rich waste streams into biomethane, that can in turn be injected into the gas network. Hydrogen production infrastructure will equally require a sizeable amount of investment to realise the much sought-after prize of an increasingly self-sufficient, sustainable net zero energy system. 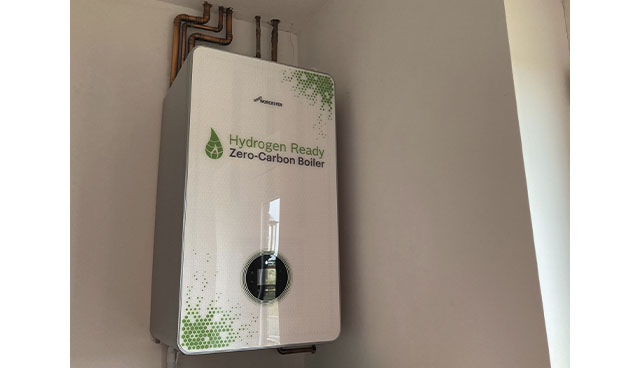 The development of the gas industry has also been good for the wider regional economy. Indeed, without the arrival of natural gas, Dixon observes that many industries may have left Northern Ireland. A modern gas network also attracts new business investment with its reliable and flexible heating systems.

Employing nearly 2,500 people, the sector brings obvious environmental, economic and social benefits and has benefited the health of all citizens by removing harmful particulates from the atmosphere. Dixon believes that the investment in natural gas infrastructure has provided the province with “a sustainable bridge to the future” ahead of the implementation of low and no carbon gas solutions in the future.

Skills for the future

A key focus if Northern Ireland is to reach its decarbonisation ambitions centres on skills, with many recognising the urgency needed to develop skills now, for delivery in the future. Again, Dixon points to the past experience of Phoenix and its partners as an opportunity for learning in this regard.

“There were no skills in Northern Ireland to design, apply, specify and install natural gas,” he says. “We went to all the training centres and helped them invest in getting ready to train people in those skills. At the same time, we linked up with the local colleges and companies to deliver conversion programmes. We set out to achieve installation costs similar to those in Great Britain. We didn’t want higher costs, often associated with the introduction of new technologies, hindering the take up of natural gas.

“The new skills required for the next phase are really an extension of the skills that exist in the independent companies that currently install natural gas and leading boiler manufacturers have made significant progress on developing hydrogen ready boiler solutions, which are being trialled in a number of large-scale Great Britain trial projects and are anticipated to be available to the wider marketplace in the next couple of years.”

Dixon is keen to emphasise that the changes required to decarbonise the gas network, particularly in the short and medium term can be achieved with minimal impact to energy users thanks to the modern polyethylene gas network that has been built locally. Biomethane lends itself to be injected into the existing network without any change for the end user and indeed, 20 per cent of hydrogen can be accommodated with minimal change to the existing system. “We need to keep the conversion process and how we inform customers very simple: 98 per cent of what installers and consumers do will still be the same,” he states.

Biomethane injection is expected to start later this year, with two or three early adopters coming online and Dixon explains that injection at different parts of the network will support the emerging circular economy.

The Department for the Economy’s new energy strategy makes funding available for pilot projects. At present all the demonstration projects are in Great Britain and Dixon believes “it is now critically important that we establish demonstration and trial projects locally” so that Northern Ireland can develop hands on learning and shape a wider renewable gas supply chain that will in turn accelerate the decarbonisation of homes and businesses in Northern Ireland. 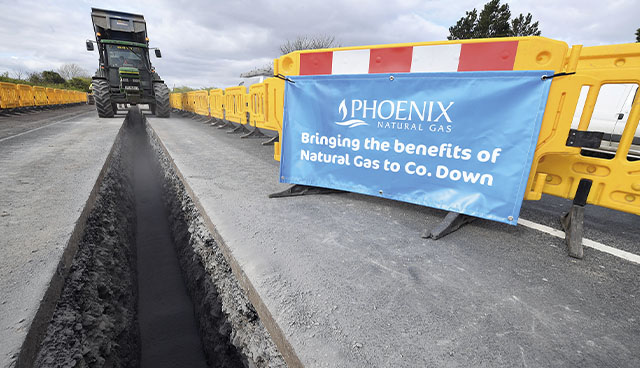 Concluding on what success over the past 25 years means for Phoenix’s progress in the next quarter of a century, Dixon explains: “The availability of a modern gas network provides Northern Ireland with an enviable starting place from which to now progress to the next stage of energy transition, the displacement of natural gas with renewable gas solutions. In doing so the gas infrastructure can provide carbon zero solutions to a large cohort of homes and businesses locally, in a similar manner to that which consumers enjoy today, supporting a decarbonisation solution that minimises cost and disruption and delivers a resilient energy system that is built upon the existing potential within Northern Ireland’s indigenous energy landscape.

Dixon is confident that Phoenix’s legacy of attracting private investment to meet policy objectives provides a foundation for progress going forward. He is eager to point out that from a customer perspective, little will change as relationships with energy suppliers and network providers will have minimal disruption, while the average 15-20 year lifespan of a boiler lends itself to domestic infrastructure upgrades well before 2050.

“Nothing will change except for the gas in the pipe which will come from increasingly renewable sources,” he states. “However, for net-zero to be achieved, we have much work to do. I believe Phoenix can build on its success and progress of the past 25 years to meet the challenge head on, however, we will not do it alone and as we move forward, we will seek to constantly broaden the Phoenix family as we seek to provide renewable gas solutions to customers for the next 25 years and beyond, in the most efficient way possible.”