Should there be no return to Northern Ireland’s Assembly and Executive by 21 October, long fought over social reforms will come into effect after amendments pegged onto the Northern Ireland (Executive Formations etc.) Bill passed, along with a measure that could halt any attempt to have Parliament in a state of prorogation on 31 October, the day the UK leaves the EU.

Introduced by then Secretary of State for Northern Ireland, Karen Bradley MP, the Executive Formations Bill was designed to give the negotiating parties “more time and space” to reach a deal and restore the Assembly and Executive. The original goal for the Bill was to push the obligatory date for the next Assembly election back to 21 October.

The option of a further delay of the election date to 13 January 2020, at the Secretary of State’s discretion, was also included. These powers were originally contained in the Northern Ireland (Executive Formation and Exercise of Functions) Act 2018. The March 2019 deadline for an election contained within that Act was eventually extended by Bradley to 25 August.

The Bill received cross-party support in Westminster, with Shadow Secretary for Northern Ireland, Tony Lloyd MP stating that Labour supported the extension of the deadline to October, but would not support any further extensions as they had grown concerned at the frequent use of what was designed as an emergency measure.

Yet it was not the date of a possible election that caught the attention of the public or the press; two amendments tabled by Labour MPs, the Armagh native Conor McGinn MP and Stella Creasy MP, saw Westminster voting on the possibility of legalising both abortion and same-sex marriage in Northern Ireland. This led to the very rare situation of devolved issues making it to the floor of the House of Commons for debate. The rarities continued when the amendments were voted on and passed.

The DUP, despite their insistence that there can be no regulatory alignment between Northern Ireland and Great Britain during Brexit talks, voted against the amendment, claiming that the Parliament was overstepping its boundaries and that abortion and same sex marriage were both devolved matters that should be left to the Assembly. The outcome of the vote and the royal assent given to the Bill on 24 July means that the DUP only has one choice if it wishes to avoid the legalisation of same sex marriage and abortion: to restore Stormont by agreeing to a deal with Sinn Féin before 21 October.

For Sinn Féin, there is a choice to be made. Sinn Féin could use the leverage to achieve a deal to their liking to return to Stormont. However, given that the party voted for same sex marriage in the instances in which it was blocked by the DUP and campaigned for legalisation of abortion in the Republic of Ireland, it is difficult to see what reforms Sinn Féin could secure in negotiations with the DUP that could possibly make up for the loss of abortion and same sex marriage reforms that are now within touching distance. The party’s repeated assertion that an Irish Language Act is guaranteed by the St Andrew’s Agreement is well established by now and any return to Stormont hinges on a deal being done along these lines, but so far there has been no indication that Sinn Féin would gamble the more socially progressive demographic within their vote by attempting to swap language reform for marriage or abortion reform.

The DUP leader and MLA Arlene Foster has said that her party are “determined” to restore the Assembly and Executive before the 21 October deadline, specifically mentioning the DUP’s track record of opposition to any liberalisation of abortion law in Northern Ireland. The former First Minister told her local newspaper, the Impartial Reporter, that the abortion amendment was the “most insidious” aspect of the Executive Formations Act. She also called the Act “drastic” and said that it would be “unacceptable for Northern Ireland and leave no effective legal framework in place”. 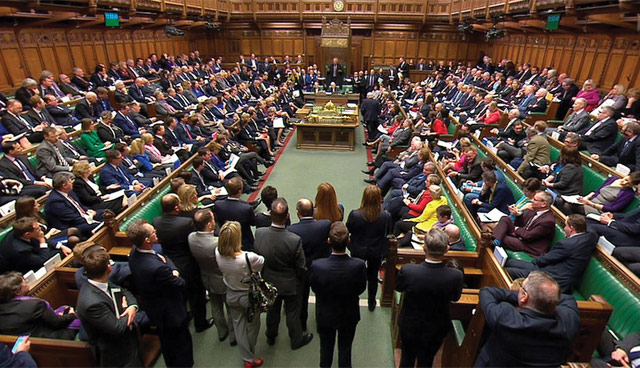 A third amendment passed as part of the Bill may yet have a key role to play as the UK continues its lurch towards a no deal Brexit under the Boris Johnson-led Conservative Government, whose power is guaranteed by its confidence and supply agreement with the DUP. The amendment, brought by the pro-remain Conservative MP Dominic Grieve, requires the Secretary of State to “on or before 4 September 2019, publish a report explaining what progress has been made towards the formation of an Executive in Northern Ireland (unless an Executive has already been formed)” and to then “make a further report… on or before 9 October 2019 and at least every 14 calendar days thereafter until either an Executive is formed or until 18 December 2019, whichever is the sooner”.

For these reports to be done and to be debated would require a sitting Parliament, which could explain why Prime Minister Johnson’s proroguing of the Parliament is set to last until 14 October, rather than until the after the Brexit deadline, which would have given Johnson a Parliament-free run at negotiations with the EU. Prorogation, seen as a means by which the Conservative Government can frustrate any chances of opposition mobilisation against a no deal Brexit, was supported by the DUP and would be illegal following the 21 October deadline due to the contents of the Act. Theresa May’s Government had asked the House of Lords to reject this amendment, but the Government’s motion was defeated and the amendment passed by a majority of 114.

New Secretary of State, Julian Smith MP will also be required to publish reports on “progress made towards preparing legislation implementing a pension for seriously injured victims and survivors of Troubles-related incidents”, and “progress made towards protecting veterans of the Armed Forces and other security personnel from repeated investigation for Troubles-related incidents by introducing a presumption of non-prosecution, in the absence of compelling new evidence”.

Should its amendments come into play due to the continuance of deadlock in Stormont negotiations, or should the pressure exerted by its passage prove the key to achieving agreement between Sinn Féin and the DUP, the Northern Ireland (Executive Formations etc.) Act looks as if it will lead to the most significant acts of governance in Northern Ireland since the collapse of the Executive in January 2017.