The Executive has agreed to back all recommendations from an expert panel, including the establishment of an integrated truth investigation and a public inquiry, into the operations of historic mother and baby institutions in Northern Ireland.

In November 2021, the Executive agreed all recommendations of the Truth Recovery Panel’s report aimed at delivering truth, acknowledgment and accountability for victims and survivors.

Published in October 2021, the panel recommended an integrated process, whereby an independent panel works in parallel with a statutory public inquiry.

The report suggests that an independent panel should be appointed within a maximum of six months but also acknowledges that complexities of the work mean that a main report will probably take a further two years. With a public inquiry expected to take much longer.

The Executive fell short of ordering a public inquiry in March 2021, following the publication of research undertaken by Queen’s University Belfast and Ulster University in January of the same year into eight mother and baby homes, a number of former workhouses and four Magdalene laundries run by the Catholic and Protestant churches between 1922 and 1990.

The research, which conservatively estimated that over 10,500 women went through mother and baby homes in Northern Ireland and 3,000 were admitted into Magdalene laundries, was initially commissioned by the Department of Health in 2018 and was initially expected to take only 12 months.

When the research was published, it highlighted that the number of women in the institutions, used to house women and girls who became pregnant outside of marriage, including girls as young as 12 years-old, peaked in the late 1960s and early 1970s but that some institutions continued to be active up until 1990.

Amongst its other harrowing findings were that women were required to carry out tough chores late into their pregnancy and were given little preparation for childbirth. In the majority of testimony gathered for the research trauma and, often, mental health issues as outcomes of birth mothers’ experiences around their pregnancy, were identified. 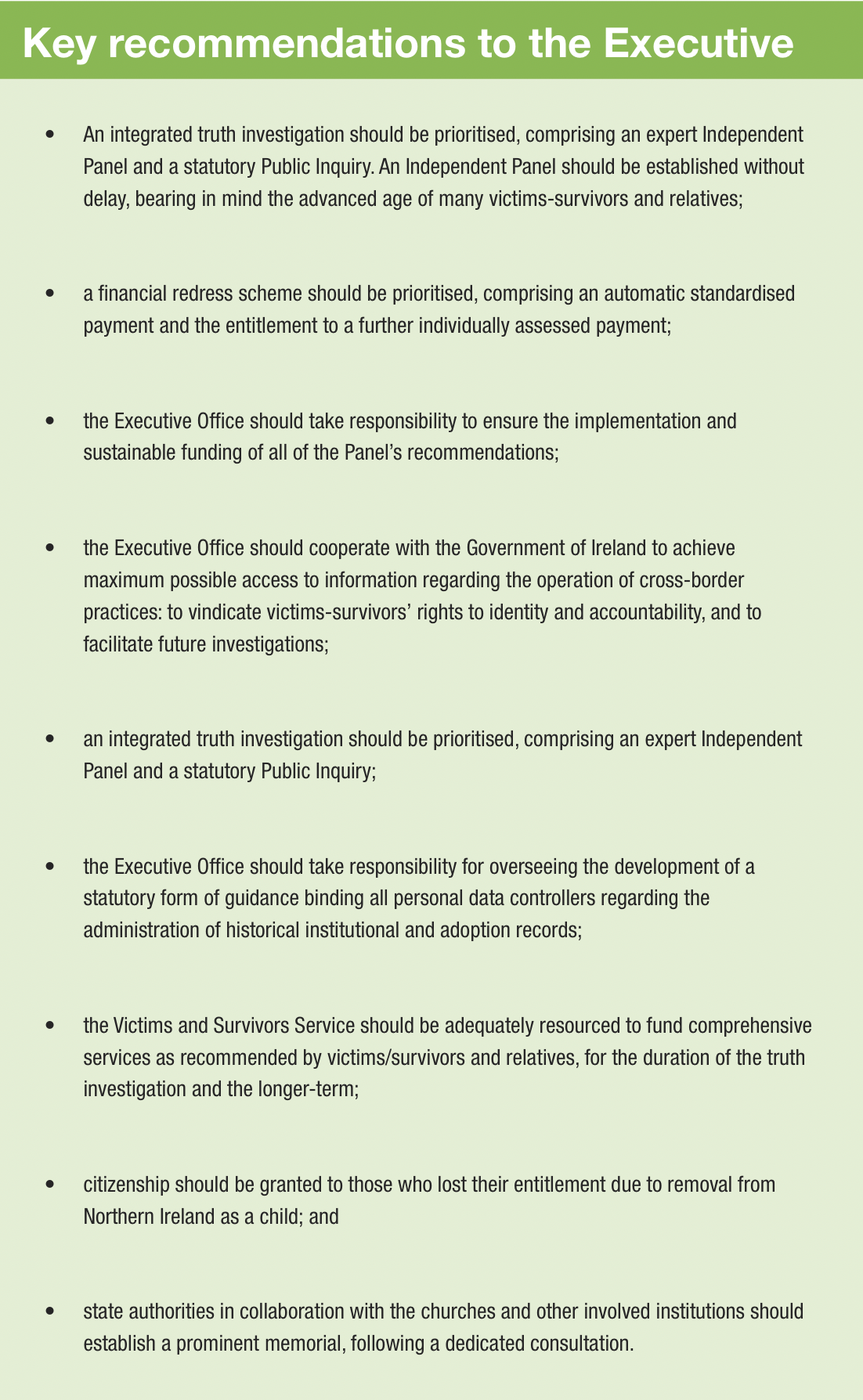 baby homes through scrutiny of records for those baby homes to which an estimated 32 per cent of infants were sent following separation from their birth mothers, which were not on the list of institutions under assessment.

Records for only one such home were assessed, and information suggests that at one point during the 1920s, death rates may have been as high as 50 per cent for those admitted.

Despite the findings, the Executive opted against ordering a full public enquiry at the time and instead ordered an independent investigation to be co-designed and victims centred.

The decision came shortly after the conclusion of the Republic’s Commission of Investigation, established in 2015, into Ireland’s mother and baby homes. Despite such a long wait, many survivors were left disappointed and rejected some of the findings, not least that no evidence was found that women were forced into the homes by Church or state authorities and “very little evidence” of forced adoptions.

The independent Truth Recovery Design Panel was established in March 2021 and its report, published in October 2021, recommends an integrated investigation by an independent panel and statutory public inquiry.

Included in the support measures recommended by the panel, co-designed by victims and survivors, is the immediate implementation of measures to ensure access to records, including a statutory preservation requirement, data protection law implementation guidance and a legislation to establish an independent truth telling archive.

Additionally, the panel has recommended measures to secure redress, reparation and compensation, including automatic redress payments, assistance to access the courts, health and wellbeing services and memorialisation and apologies.

Within its five core areas of recommendation, the panel states: “An Independent Panel should be established without delay, bearing in mind the advanced age of many victims-survivors and relatives. Its appointment and operation is not dependent upon dedicated legislation. However, legislation will be required to establish the public inquiry including its Rules of Procedure and this should be progressed urgently.”

The panel offered a variety of reasons why an integrated process is necessary, highlighting that an independent panel will feed in to educating the public inquiry and help secure victims and survivors access to records. However, it also recognises that such a body will lack the statutory powers to compel evidence production, which given the “extent and diversity” of involvement of state and non-state actors, it states “will be necessary”.

Finally, the report stated that a financial redress scheme “should be prioritised” and has called for all those “complicit in the processes of institutionalisation and forced labour, family separation and adoption” to act “without delay in issuing unqualified apologies”.

A spokesperson for the Executive Office confirmed that the programme of work is to be led by the Department.