Alliance Party leader Naomi Long became her party’s first ever Member of European Parliament (MEP), as well as becoming the only active politician in Northern Ireland to have held all three elected positions of councillor, MLA and MEP.

Long’s election to the European seat has broken up the established balance of Northern Ireland as a European Parliament constituency that has existed since its inception in 1979. Traditionally, the makeup of the three-seat constituency has been one DUP seat, one nationalist seat and one UUP seat.

The only previous changes in the constituency’s first seat, held by DUP MEPs Ian Paisley, Jim Allister and Diane Dodds since 1979 had been Allister’s defection to his newly founded Traditional Unionist Voice (TUV) in 2007, but the seat was then won back for the DUP by Dodds in 2009. The nationalist seat had been held by John Hume for the SDLP until 2004, when Bairbre de Brún of Sinn Féin defeated Hume’s appointed successor, Martin Morgan. 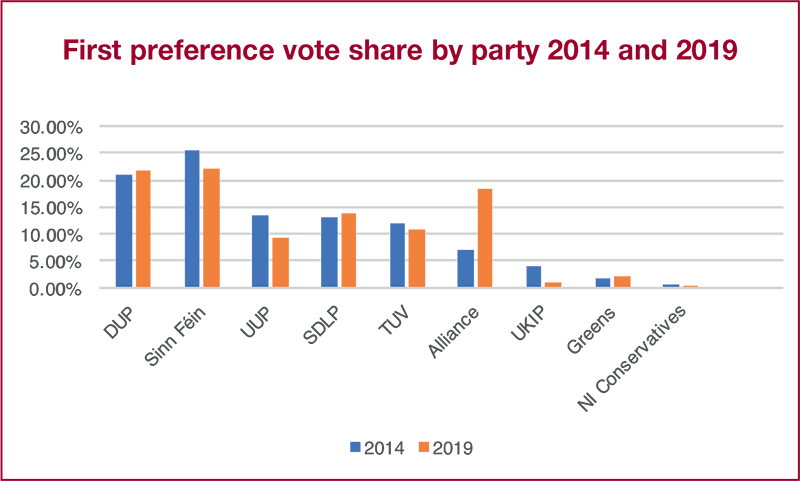 Long’s victory is the first time the non-nationalist, non-DUP seat has not been occupied by a UUP politician. The seat has been held in the past by John Taylor and the outgoing Jim Nicholson, who held the seat from 1989 and outlined his plans to retire before the election. Nicholson held the seat for 30 years under the UUP banner and, briefly, under the short-lived electoral alliance between the UUP and the Conservative Party known as the Ulster Conservatives and Unionists.

What is perhaps most notable about Long’s win is the vast increase in first preference votes gained by the Alliance Party since the 2014 European elections. In that election, Alliance candidate Anna Lo received just 44,432 first preference votes, 7.1 per cent of the overall vote and was eliminated after the fifth count, ranking sixth overall, behind candidates from Sinn Féin, DUP, UUP, SDLP and TUV. The name recognition of Long, as party leader, certainly played a part in the Alliance’s increase, but a leap to 105,928 first preference votes, 18.5 per cent of the vote, cannot be simply attributed to a name.

In this year’s local elections, the Alliance returned their best local electoral performance since the 1970s, but still finished fifth overall in terms of both first preference vote percentage and number of seats won; they had closed the gap on the traditional big four, but the gap was still in existence. Perhaps buoyed by the performance in the local elections, Long rode the wave and placed third in first preference voting, ahead of SDLP leader Colum Eastwood, whose party had just returned a better showing, in raw numbers terms at least, in the local election and ahead of Jim Allister, who has typically polled above his party’s median in European elections. 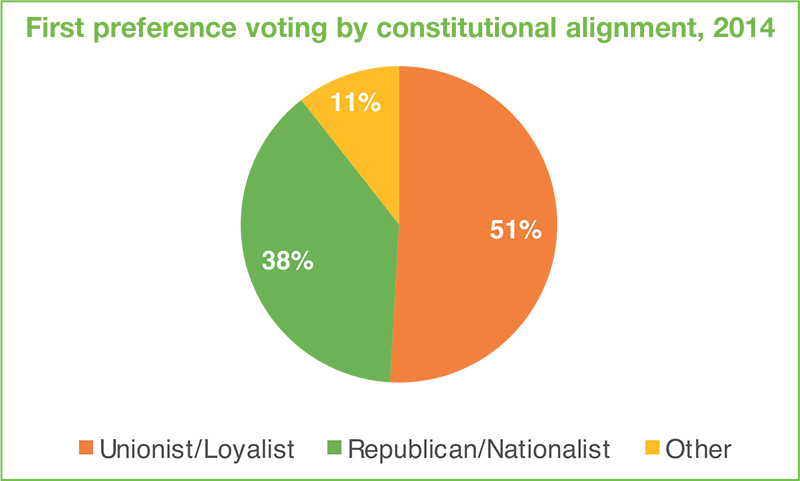 As the loss of a previously uniformly unionist seat would suggest, the election continued the trend seen in the local elections whereby the vote share of explicitly unionist candidates and parties declined. In 2014, candidates from across five explicitly unionist parties – DUP, UUP, TUV, UKIP and the NI Conservatives – received 319,135 first preference, 50.9 per cent of the vote; if one includes NI21, who did support the union, but self-designated as an “other” party, these figures rise to 329,688 and 52.6 per cent. In 2019, both of these figures declined, to 245,771 and 42.93 per cent respectively across the five parties.

This unionist decline did not deliver a boon for the explicitly republican/nationalist parties, Sinn Féin and the SDLP, although their decline, while starting at a lower base, was less pronounced than that of the unionist parties. The outright republican/nationalist vote fell from 241,407 first preference votes, 38.5 per cent of the vote in 2014, to 205,540 first preferences, 35.89 per cent of the vote, in 2019.

The drop in first preferences was most acutely felt by the returned Sinn Féin MEP Martina Anderson, who had nowhere to go but down after being elected on the first count with 159,813 first preferences in 2014. However, Anderson was not the first Sinn Féin MEP to enter an election in this predicament; in fact, she became the first elected Sinn Féin MEP in Northern Ireland who had to wait past the first count in order to be elected. Having to wait past the first round meant that Sinn Féin’s inability to court transfers from voters of any party other than the SDLP was exposed; despite coming first in terms of first preference votes, Anderson was the third and last candidate to be elected, only on the fifth count after Colum Eastwood had been eliminated. 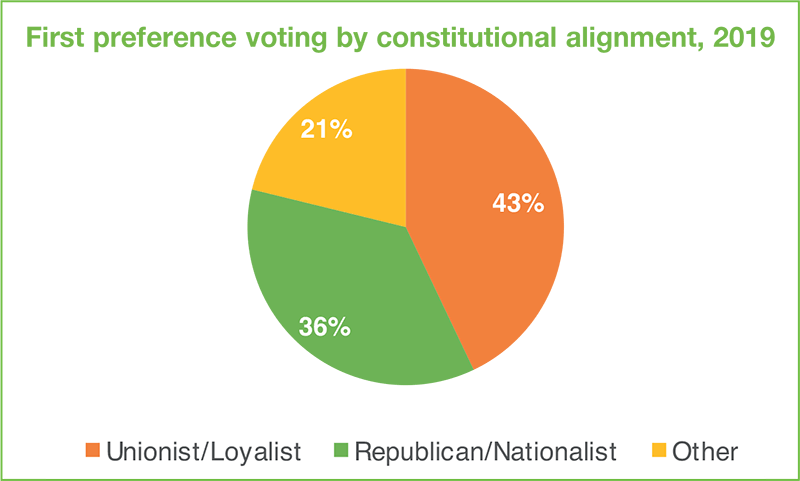 For Eastwood and his SDLP, the election was another failure. The retirement of Nicholson, the putting forward of the party leader as candidate and shifting demographics all suggested that it was possible for there to be a second nationalist/republican seat for the first time, but a disappointing first preference showing of 78,859 votes ended that idea. While the raw number of first preference votes for the party represents a drop from 2014, low turnout in this most recent election means that their share of first preferences rose marginally, from 13 per cent in 2014 to 13.72 per cent. Eastwood’s failure to pick up meaningful numbers of transfers until he was eliminated also raises the issue that both Sinn Féin and the SDLP must face: when the traditional identarian split of politics, usually represented in first preference votes, in Northern Ireland is dealt with, it is the Alliance Party that pick up the bulk of transfers.

What this leaves Northern Ireland, a European constituency that will no longer exist after Brexit, with is two MEPs explicitly opposed to any plans so far proposed by the British Government for Brexit and one MEP whose party is currently keeping the Conservatives in control of Parliament. Long has previously been on record calling for another referendum to be held, while Anderson campaigned against Brexit and has made Sinn Féin opposition to any future border infrastructure clear. Dodds, on the other hand, has said that it is time to implement Brexit and “respect democracy”.