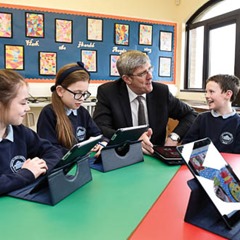 agendaNi considers the impact of this year’s education budget and gauges reaction from within the teaching sector.

A £28 million cut to the Department of Education’s aggregated schools budget is set to trigger the loss of an estimated 500 teaching jobs and 1,000 non-teaching support staff. There are currently around 18,400 full-time equivalent teachers in the region.

Addressing a meeting of the Education Committee, John O’Dowd stated: “It has been the most difficult budget I’ve had to prepare in my tenure as Education Minister.” He argued: “We are in a financial position, in my opinion, created by others. Our Economic Strategy is largely driven by others and I do believe that the Executive continues to manage to mitigate against some of the worst aspects of austerity measures which are decided elsewhere.”

The Education Minister continued: “Despite the very welcome additional £64 million being provided to my department as a result of the Executive’s final budget, we still face significant pressures within the Department of Education. Around a 5 per cent funding gap remains which equates to around £97 million.”

There has been a 19.7 per cent reduction in department’s capital budget which translates into a loss of £36.1 million (when compared to the 2014-2015 baseline). A 1.5 per cent cut to the resource budget has removed a further £29.5 million (this would have been a 4.9 per cent reduction without the £64 million injection). The Executive does not have discretion over AME funding and therefore the budget is primarily concerned with departmental expenditure limits.

Justin McCamphill of the NASUWT announced that his union will oppose the budget at every level: “A promise that all redundancies will be voluntary ignores the elephant in the room that there will be fewer teachers left in schools to deliver the same level of education to our young people.”

Meanwhile both INTO and Ulster Teachers’ Union members were balloted in support of industrial action. The membership of the UTU endorsed action short of strike (77 per cent) while INTO voted in favour of strike action (79 per cent). INTO’s Northern Secretary, Gerry Murphy, commented: “Our members are saying ‘enough is enough’.” He added: “They have delivered a clear message to those who are charged with managing our education system. They have had enough of the cuts agenda. INTO members have had enough of their profession being ripped apart to balance the Stormont budget.” UTU General Secretary Avril Hall Callaghan asserted: “Even more modest cuts than predicted are going to have a huge impact on the education of pupils.”

O’Dowd maintained that it is too early to accurately predict the full impact of the budget. He insisted: “I have done everything within my power to protect jobs, both in terms of teachers, non-teachers and support staff throughout the boards. However, how schools monitor their budget is delegated to schools. So we’re dealing with 1,137 different budget lines who will make decisions around staff costs.” It is expected to be at least May or June before the Education Minister receives all the information from schools in order to fully understand what savings have been made.