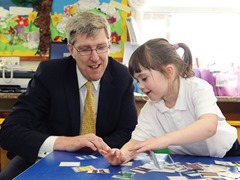 agendaNi considers the main points of the Bill which will set up the Education and Skills Authority.

A single education and skills authority (ESA) was proposed in March 2005 as part of the Review of Public Administration. Devolution was restored in May 2007 and then Education Minister Caitríona Ruane brought forward a Bill in November 2008 to implement the ESA. That Bill reached its committee stage but stalled due to the political divisions over academic selection and the role of the main Protestant churches (transferors).

Peter Robinson and Martin McGuinness published the heads of agreement for the Education Bill in November 2011. The Education and Skills Authority would take on the responsibilities of the five education and library boards, their staff commission, the Council for Catholic Maintained Schools and the Youth Council. The ESA would be the single employing authority of all staff in all grant-aided schools.

Policy would continue to be set by the Department of Education. The ESA would consist of eight political appointees, eight appointees from the Catholic and main Protestant churches, and four others (plus a Chairman) appointed by the Minister of Education.

Legislation was due to be passed by July 2012 but the deadline passed without a Bill being published. Indeed, Executive agreement on the Bill was delayed until

20 September 2012. The second reading took place on 15 October and the Education Committee published its report on 8 April this year. The Programme for Government states that the ESA will be “operational” in 2013 but only “fully functional” in 2014 or 2015 as it will take time to wind up its predecessors.

Area plans will be drawn up by the ESA and submitted to the Department of Education for approval. The ESA is required to take the department’s regulations into account and must revoke an area plan if directed to do so by the department.

The ESA will check all schemes against legislation and official guidance and will ask the school to modify schemes if they do not meet those legal requirements. As the source of funding and the appointer of governors, the ESA’s advice will undoubtedly have a major influence on the boards.

Disputes between schools and the ESA can be referred to a tribunal, appointed by the First and deputy First ministers. This appeals process is viewed as a legal protection for grammar schools but it also extends OFMDFM’s remit into education policy.

All boards of governors will be required to “promote high standards of educational attainment” but the strategies for achieving those standards will be decided centrally by the ESA.

Two public bodies will remain intact: the Education and Training Inspectorate and the Council for the Curriculum, Examinations and Assessments (CCEA). The CCEA will be required to consider the requirements of three particular groups: industry, commerce and the professions; people with special learning needs; and people who are taught in Irish. It must also ensure that the standards of Northern Ireland’s exams and assessments are similar to those elsewhere in the UK.

A new sectoral body will be set up for controlled schools. This will operate alongside a new sectoral body for the Catholic maintained sector and the existing bodies for the integrated and Irish medium sectors.

Interestingly, the explanatory memorandum for the Bill does not mention the previous Education Bill or the Assembly’s role in halting it. The document instead refers to “meetings with stakeholders and other interested parties which have helped further shape policy decisions”.