Just days after announcing his first Budget as Chancellor for the Exchequer, Rishi Sunak, has had to announce an additional rescue package for the UK economy as the rapid spread of COVID-19 continues paralyse the majority of sectors.

Sunak’s package was tailored to support businesses and workers and comes as an addition to the £7 billion of financial support for businesses announced in the original Budget.

The package included state loan guarantees worth £330 billion along with a further £20 billion of financial handouts to help struggling businesses. Major initiatives included a one-year break from business rates and government grants of up to £25,000 for struggling retailers and pubs.

Additionally, Sunak announced that banks had agreed to give struggling customers a mortgage holiday of up to three months, while support packages for airlines and airports are being discussed.

Highlighting the speed at which COVID-19 and now restrictions on movement placed by the Government are changing the economic landscape, Sunak said that the government’s ambitions to protect companies and incomes would be “on a scale unimaginable only a few weeks ago”.

However, pressure remains on the Government to give greater supports for self-employed workers. Sunak’s package pledged to pay employees 80 per cent of their salaries up to £2,500 a month as part of a job retention scheme, however, the self-employed are yet to receive supports above the basic benefit level.

The Irish Congress for Trade Unions (ICTU) estimates that Northern Ireland has some 135,000 self-employed workers, 11,000 zero hours contract workers and nearly 9,000 agency workers, making up roughly 20 per cent of the total workforce.

Initial measures introduced in Budget 2020 to tackle the economic impact of COVID-19 included a £5 billion emergency response fund to support the NHS and other public services in England. A further £6 billion was pledged to the NHS for extra funding over five years in order to pay for staff recruitment and necessary hospital upgrades. A £500 million hardship fund will also be paid out to local authorities in England in order to assist the most vulnerable in their areas.

In terms of the working conditions and the measures to protect businesses throughout the pandemic, Sunak confirmed that anyone advised to self-isolate will be entitled to statutory sick pay, including those who do not present symptoms. Self-employed workers ineligible to claim sick pay will be able to claim Employment Support Allowance from the first day rather than after the first week, as had been the case before. 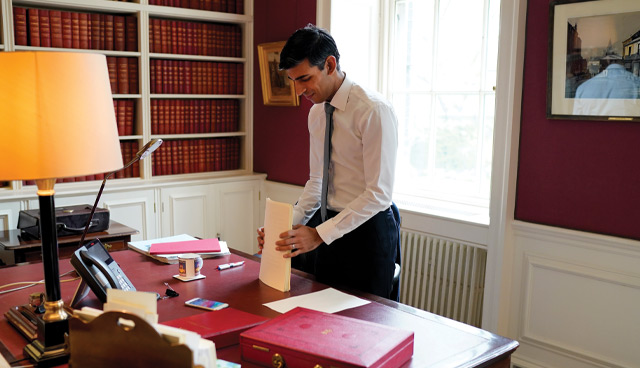 Firms with fewer than 250 staff will be refunded up to two weeks of sick pay payments, with small firms eligible for “business interruption” loans of up to £1.2 million. Business rates have also been abolished for firms in the retail, leisure and hospitality sectors with a rateable value of less than £51,000.

At the time of the budget announcement and prior to the Government’s strict measures on movement outside of the home, the economy was predicted to grow by just 1.1 per cent in the coming financial year, down from 1.4 per cent on the previous year and set to be the slowest rate of growth since 2009. Inflation was forecast to be at 1.4 per cent for the financial year, rising to 1.9 per cent for 2021/22. The Government had been scheduled to borrow £14.4 billion more than had been previously forecast, 2.1 per cent of GDP, with total additional borrowing set to be £96.6 billion in the period to 2023/24, but that figure will now likely rise again.

The tax threshold for National Insurance Contributions will rise from £8,632 to £9,500 as was previously announced in November. This move will take 500,000 out of paying tax entirely and is estimated to save an average of £85 per person who earns over £9,500.

The controversial 5 per cent VAT charge on sanitary products, known as the tampon tax, has also been scrapped.

Manufacturers and importers whose products have less than 30 per cent recyclable material will now be charged £200 per tonne of material and a plastic packaging tax will come into force by April 2020. Red diesel subsidies will be scrapped “for most sectors” within two years but will remain for farmers and rail operators.

Total investment in English flood defences is to be doubled to £5.2 billion over five years, with £120 million immediately going to emergency relief for the English communities affected by the winter flooding and £200 million for flood resilience. £640 million will be pledged to a “nature for climate fund” that protects natural habitats in England and plans to plant 30,000 hectares of new trees.

The budget features a significant investment in infrastructure, with the Conservatives using their majority to pursue an end to the austerity they implemented throughout the 2010s. £600 billion has been pledged across roads, rail, broadband and housing up to the year 2025.

Stamp duty for foreign buyers of properties in England and Northern Ireland is to be levied at 2 per cent from April 2021. £650 million has also been pledged in order to provide an extra 6,000 places for England’s significant population of rough sleepers. Also, in housing, the Government has pledged £1 billion in order to remove combustible cladding from all public and private buildings over 18 metres tall.

£5 billion is to be spend on the rolling out of gigabit-capable broadband in England’s hardest-to-reach areas as the UK seeks to fill in the holes left in its 95 per cent connectivity rate. In welcome news for media and digital publishers, the VAT on digital publications such as newspapers, e-books and academic journals has been scrapped.

The Northern Ireland Executive received a £215 million boost as part of the budget, with £138 million pledged to infrastructure spending and £77 million to day-to-day spending. Minister for Finance Conor Murphy has stated that more money will be made available in response to the COVID-19 pandemic if necessary.

Disappointments have been expressed with the Budget’s effect on Northern Ireland, specifically the failure to cut or abolish the Air Passenger Duty (APD) levy. APD was cited by FlyBe, who operated 80 per cent of flights in George Best Belfast City Airport, as a reason for the company’s failure. There was also significant disappointment with the budget’s failure to assist northern businesses as they prepare for the new trade arrangements codified in the Irish Protocol section of the Withdrawal Agreement.

DUP MP Sammy Wilson summed up the feelings expressed across the political establishment when he referred to the “miniscule” financial help afforded to Northern Ireland within the budget as a “false dawn”.