Outlining some of the challenges currently facing Northern Ireland in what he describes as “the current chaotic scenario”, Head of the Civil Service David Sterling points to signs of economic improvement, particularly in the labour market, however, he adds: “Progress has clearly begun to slow recently and there are some severe warning signs within our economic indicators.”

Sterling recognises recent job growth figures and Northern Ireland’s low claimant count as encouraging, stating: “When I joined the service in the 1970s, unemployment was 8 per cent, it ran to 18 per cent in the mid 1980s and to see it today at 2.5 per cent is something that is very welcome.”

However, he also notes challenges in the form of high long-term unemployment and high inactivity rates, which are at odds with the UK average. In the same vein, productivity levels in Northern Ireland have been “a historical, structural problem”, with Northern Ireland lagging behind most of the UK’s regions and the UK as a whole, which is itself lagging other comparable European economies.

Sterling adds: “There are clear emerging signs of our labour market plateauing, with the claimant count having bottomed out alongside falls in vacancies, particularly outside Belfast, with some signs that the claimant count is now beginning to grow.

“This translates as a steady but unspectacular growth outlook. However, economic growth of about 1 per cent over the next few years will not cut it when it comes to tackling the major structural weaknesses we have in this economy.”

Sterling suggests that the future outlook is unlikely to improve given recent feedback through the business activity index. Ulster Bank’s PMI index for September 2019 highlighted a marked deterioration in business conditions since January, with business activity declining in each of the previous seven months and registering significantly worse than the other 12 UK regions. 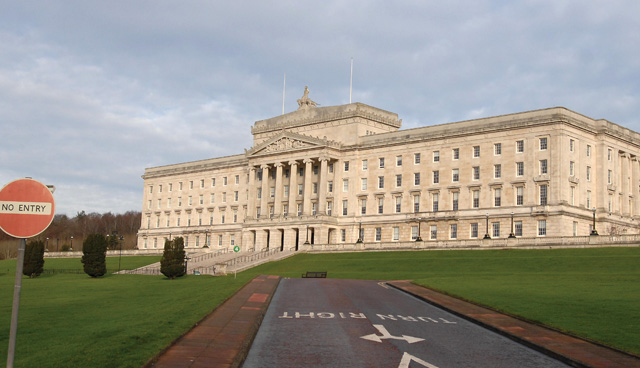 “As officials we are doing our best to keep things going but we are in danger of accepting a new normal, where yesterday’s solutions are all that we have on offer.”

“We pick this up anecdotally ourselves. Businesses are telling colleagues in the Department for the Economy that the lack of information from the UK Government is inhibiting their ability to plan for the future, especially when considering new capital investment or the pursuit of new contracts,” says Sterling.

“Some have suggested that they are now at the point where they will have to make a definite decision about where to locate their business in the future.”

“Uncertainty abounds”, says Sterling as he highlights that the business slowdown is unlikely to change until greater certainty arrives.

“The NICS are currently planning for a variety of different scenarios around Brexit and obviously we are awaiting some political direction as well. Northern Ireland has been through several attempts to find a way forward politically without avail and it is now well over 1,000 days since the collapse of the political institutions. We continue to hope and plan for the return of the Assembly and the Executive but we can’t be sure this will happen.”

“As officials we are doing our best to keep things going but we are in danger of accepting a new normal, where yesterday’s solutions are all that we have on offer.”

Discussing the decisions being taken by officials, guided by the previous Executive’s vision to improve wellbeing and driving economic growth in Northern Ireland, the Head of the Civil Service says: “We of course continue to keep public services on track and the business of government going. Thankfully there has been no cliff edge yet but be under no illusion that our public services are suffering from what we have termed strategic decay and stagnation.

Sterling agrees with a recent Institute for Government report on the impact of the devolved institutions which concluded, amongst other things, that the NICS should be applauded for how it has handled the absence of ministers. However, is also aware of room for improvement highlighted in the report.

“There is scope to improve the extent of collaboration across departments and also to enhance civil service capability. These are things that we are working on,” he explains.

The report also stated that it is “vital” that the Northern Ireland public restores its faith in its institutions. Sterling says that this is a thing that “concerns me greatly”.

“Even with 1,000 days without government and even with huge increases in waiting lists in our public services, there is no public outcry for a return of the institutions.”

Sterling adds that while he can’t predict with any confidence when ministers will return: “What I do know is that choices will need to be made and, in some cases, deferring those choices, many of which have been around for a very long time, will make eventual decisions and adjustments more painful in the future.

“Government is faced with a range of difficult choices across all public services, which will ultimately lead to inevitable economic choices. The challenge will be to strike a balance between unprecedented short-term pressures and initiating the long-term changes needed to drive economic growth.”

Outlining some of these choices in terms of policy creation, the Head of the Civil Service points to the current Department of Finance consultation of business rates, which are higher than those in GB. However, issues cannot be looked at in isolation, he explains. Households in Northern Ireland are currently paying around half of those in GB when considering local rates and domestic water charges.

Offering the context of a health service needing £300 million per year to stand still, while almost £300 million is currently being paid to NI Water in subsidy and £2.5 billion investment needed in water and wastewater infrastructure, he says that it is clear that decisions are going to be needed and tough choices need to be made. 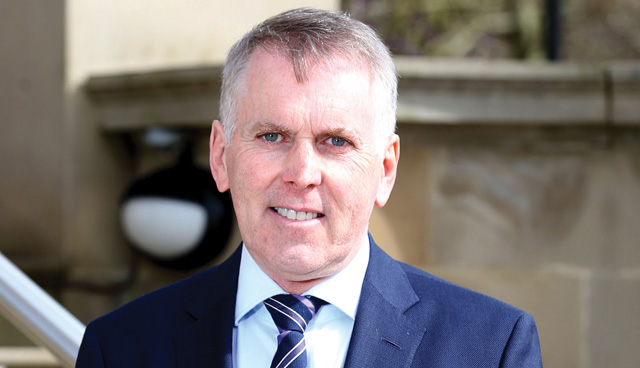 “We also have a range of universal benefits which, again, we will have to question when we look at the challenges across our public sector. So, there is an issue around mindset in Northern Ireland and there are also considerations around moral hazard too.”

Turning to skills, Sterling says that the latest skills barometer for Northern Ireland indicates a skills capacity that isn’t currently delivering for the labour market of the future.

“The need to invest in skills is vital, with clear priorities emerging. The skills strategy will set out a vision for an improved skills system and ultimately this will benefit but again, we need ministerial endorsement and investment to ensure a long-term vision for Northern Ireland.”

Another policy priority is that of climate and the environment, where major change and improvement is necessary. Describing the decarbonisation transition as “the most pressing issue of our time”, Sterling adds that long-term policy over the next three decades will be needed to bring about the rapid pace of change necessary to deliver a diverse energy mix focussed on least cost decarbonisation.

Sterling returns to the challenges posed by Brexit, which he describes as “the most influential external factor” affecting the Northern Ireland economy at present. While acknowledging that the risk of no deal appears to have reduced, Sterling says that firms are still facing a “near impossible situation” as they try to prepare for the “swinging pendulum that is trade policy”.

“Preparation for Brexit is sucking up resources and cash that could be used elsewhere and leaving a much-reduced bandwidth here and indeed in Whitehall.”

Sterling believes that the draft withdrawal agreement in its current form would still require a lot of detail on how such an approach would work in practice and adds that it will require careful planning from the UK and EU for implementation. He is also aware that while a lot of focus has been on trade, the Northern Ireland economy may well be impacted by other factors as well.

“The agreement covers more than trade and goods and we’re going to have to wait for an outcome of the UK/EU negotiations to see what access or restrictions services companies based here would face to the EU market. While most of our exports may be in goods, in many cases these exports rely on trade, services and data transfer between the UK and EU.

“Nothing can be certain while market access for services remains uncertain,” he states.

Concluding, Sterling says that in the absence of a functional assembly the normal means of accountability don’t operate and that has inevitably thrust officials more into the public spotlight.

“Our priority will continue to be to facilitate and prepare for the return of the Executive and to deliver public services as best we can. There is no doubt that uncertain times will continue and all of the warning signs point to a slowdown in our local economy, making the work we do in the NICS even more important than ever. I’m confident that the civil service, which has risen to many challenges, will rise to this difficult challenge.”