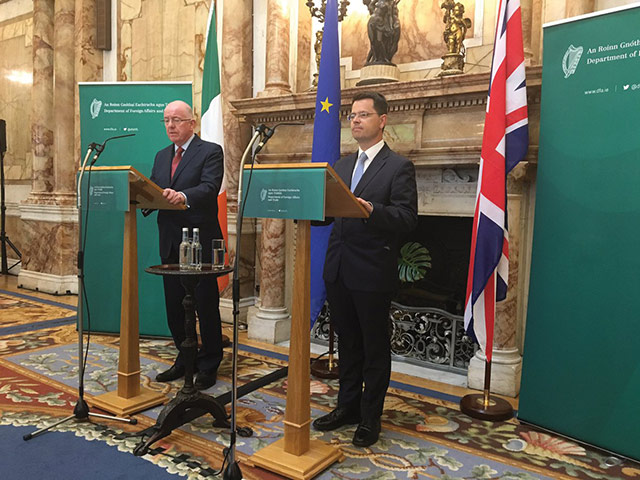 As Northern Ireland’s political leaders embark on reconvened talks they do so in an atmosphere of weary resignation on the part of the electorate. Weary, because Northern Ireland’s post-1998 history is littered with a series of seemingly interminable negotiations, while the air of resignation stems from the belief that the context appears to be characterised by a condition of inertia: immovable objects meet irresistible forces.

Certainly, as the talks begin there seems to be little suppleness on the parts of the two key players, the DUP and Sinn Féin (SF), even though both share the goal of restoring devolution or so it seems. Some doubt the extent to which SF is genuinely committed to that objective, believing that its renewed call for a border poll, rebadged as a ‘unity referendum’, indicates its key and immediate priority, one lent impetus by the ocean of uncertainty that attends Brexit. On the other hand, the DUP is reassured that should the talks fail then direct rule beckons, a Linus blanket from which it draws considerable comfort.

Ironically, of course, direct rule may well aid the Irish unity cause, not least because it could be in place when the UK leaves the EU, perhaps with a hard Brexit or, calamitously, no deal at all. Should anyone assume that direct rule may be merely a very temporary blip they should recall that on the last occasion it was reintroduced, in the late autumn of 2002, it remained in place for 55 months. Indeed, between 1999 and 2007, each Secretary of State, from Peter Mandelson to Peter Hain, presided over a direct rule period, albeit briefly in both Mandelson’s case and that of John Reid, and for two and a half years during the whole of Paul Murphy’s tenure who succeeded Reid in October 2002.

As an option, direct rule is highly unattractive. It is a blunt instrument whether in terms of policy-making, law making or accountability that tends to restrict access to civil society and relies on British ministers to steer Northern Ireland through the vagaries of political and economic events. Should it be renewed again, then expect an expanded Northern Ireland Office pursuing a largely unbridled UK Government agenda, not least in relation to Brexit, and a severely diminished level of parliamentary scrutiny. Whereas devolution supplies a developed committee system at the Assembly nine statutory and six standing committees direct rule would mean that scrutiny and accountability of devolved matters would revert primarily to the Northern Ireland Affairs Select Committee and in relation to Brexit to the 21-strong ‘Exiting the EU Committee’, which has just two Northern Ireland MPs among its number, Sammy Wilson (DUP) and Mark Durkan (SDLP), respectively a ‘leaver’ and a ‘remainer’.

While it is the case that a wide range of parliamentary committees, currently more than 30, are in the midst of Brexit-related inquiries, few have Northern Ireland representatives on them, whether in the Commons or the Lords. In short, under direct rule Northern Ireland’s voice risks being marginalised at Westminster: there are 14 attending Northern Ireland MPs in the Commons plus two dozen Northern Ireland peers in the Lords, the majority of whom are ‘leavers’, including all eight DUP MPs. For them to adequately address the myriad of Northern Ireland matters, excepted and reserved as well as otherwise devolved, is a task too far.

Moreover, at Government level and in relation to Brexit, the Secretary of State, James Brokenshire, is not a permanent member of the Cabinet Committee dealing with Brexit, but attends only as required. And, of course, he has to wear two hats: Northern Ireland’s key voice at Westminster and concurrently the UK Government’s leading voice in Northern Ireland. Balancing those roles is a delicate undertaking: which would prevail under direct rule? Moreover, his job is made even more complex, first by his status as the UK’s co-guarantor of the Belfast Agreement together with his Irish counterpart, Charlie Flanagan and, secondly, by the fact that a majority of Northern Ireland’s voters wish to remain within the EU.

Given the renewed and justifiable prominence given to the border question on the island of Ireland, it is little wonder that in the current context SF has resurrected the unification option, a goal that has a new dynamic, certainly, but the pursuit of which for the foreseeable future is off the agenda given that the conditions for holding a referendum on Northern Ireland’s constitutional future are not, as yet, met. However, nationalists, both SF and the SDLP, have in their armoury another thinkable option: joint authority.

“Both SF and the SDLP, have in their armoury another thinkable option: joint authority.”

This has gained some traction recently with both parties, each of which has cited a joint paper (just one page long) issued by Bertie Ahern and Tony Blair in April 2006 during the long run-up to the St Andrews talks and the subsequent Agreement and Act. In the paper, the two premiers stated that if devolution had to be deferred “this will have immediate implications for their ‘joint stewardship’ of the process” and that they were beginning “detailed work on British-Irish partnership arrangements… to ensure that the Good Friday Agreement, which is the indispensable framework for relations on and between these islands, is actively developed across its structures and functions”. Stating their readiness to introduce emergency legislation to facilitate this outcome, they continued that the “work will be shaped by the commitment of both governments to a step-change in advancing North-South co-operation and action for the benefit of all”.

Such was the flimsy, and undefined nature of the then thinking by both governments that it has been misrepresented as the textual warrant for joint authority. ‘Joint stewardship’ is an even flimsier concept, one that was interpreted widely as meaning a greener form of direct rule which assigned to the Irish Government, to borrow Garret FitzGerald’s phrase uttered at the time of the Anglo-Irish Agreement in 1985, a role that was more than consultative but less than executive. But whatever joint stewardship might have meant, it wasn’t nor indeed isn’t, a synonym for joint authority let alone joint sovereignty which would see Northern Ireland transformed into a condominium. Rather, joint stewardship implied the development of the north-south and east-west relationships between the UK and Ireland, not changes to the internal governance of Northern Ireland expressed through the Assembly and Executive.

What of joint authority? Maximalists do equate it with joint sovereignty, such that Northern Ireland would be co-governed by the UK and Ireland, whereas minimalists cleave to a more nuanced understanding abbreviated as greener direct rule. Whichever interpretation one places on it, though, each would change the constitutional status of Northern Ireland and thereby undermine the cardinal consent principle entrenched in the Belfast Agreement. For that reason alone, the UK Government’s position is clear: joint authority is wholly unacceptable as an option designed to resolve the current impasse. This unequivocal stance was stated in mid-January in the House of Lords by the Permanent Under-Secretary for the Scotland and Northern Ireland Offices, Lord Dunlop: “I can confirm that the Government remain fully committed to the Belfast Agreement, including the principle of consent governing Northern Ireland’s constitutional position… Northern Ireland is and remains a full part of the United Kingdom. Clearly, any form of joint authority would be incompatible with the consent principle”.

Lord Dunlop was in fact reiterating the stated position of the Labour Government in 2006 when the then Secretary of State, Peter Hain, remarked in the House of Commons, just one month after the publication of the fabled Blair/Ahern paper that, “there is absolutely no question of joint authority or joint governance”. Whilst acknowledging that scope did exist for the development of the cross-border relationship, Hain concluded with the emphatic statement, ‘there is no question of joint authority. There is no question of that at all’.

Where does this leave Northern Ireland? Another Assembly election is now clearly off the table, as is joint authority. That leaves either direct rule, perhaps of a greener hue, or the restoration of devolution. For obvious reasons, the latter offers a much softer and infinitely preferable landing than the former’s desiccated form of governance.