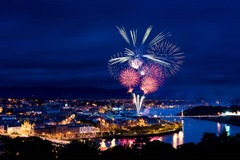 A summary of the north west’s new council area.

The Derry and Strabane district will incorporate two existing districts, taking in the north-western corner of Northern Ireland. The shape was decided in 2008 and is smaller than the North West regional council proposed in 2005; the former area would have included Magherafelt and most of Limavady. Under the Executive’s plans, Limavady and Coleraine will both be incorporated into the Causeway Coast and Glens council.

Elections for the new councils should take place on 22 May 2014 with the councils then becoming operational on 1 April 2015. Derry and Strabane will be divided between three parliamentary constituencies: Foyle, West Tyrone (covering Strabane) and East Londonderry (which includes Claudy and Banagher).

The community balance, measured by religious background, was 72.2 per cent Catholic, 25.4 Protestant and other Christian, 1.8 per cent none and 0.6 per cent other.

Under the census’ national identity categories, 45.5 per cent of residents considered themselves Irish whereas 24.4 per cent were British (roughly equivalent to the Protestant population) and 21.6 Northern Irish. 5.3 per cent expressed a mixture of backgrounds and 3.2 per cent had other national identities.

Derry and Strabane will have close cross-border links with the Donegal County Council which has 161,137 residents but a much more dispersed population. Donegal will go to the polls next May but Buncrana and Letterkenny town councils will be abolished at that point.

Derry’s history as a settlement dates back to the founding of a monastery by Saint Columba (Colmcille) in the 6th century AD. The Grianan of Aileach, outside the city, may date back even further.

Charters for Londonderry from 1613 and 1662 still stand but the city’s council opted to change its own name to Derry City Council in 1984. Strabane’s town charter was also granted in 1613. The Strabane district was covered by four rural districts before its formation in 1973: Strabane urban, Strabane rural, Castlederg rural, and part of Omagh rural district.

Given its size, Derry city is the obvious choice for the headquarters of the new council. The city will also want to keep its urban privileges and the council is therefore almost certain to opt for borough status after it is established.