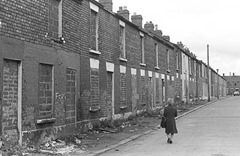 Charities and officials disagreed over how to tackle homelessness in 1984 with the voluntary sector being accused of self-interest.

Many voluntary organisations “started life with high ideals” but were “becoming more concerned with reasons for perpetuating their own existence rather than finding solutions to those matters which they have made campaign issues.” That was the assessment of Robert C Martin, a DoE civil servant sitting on a working group on homelessness in 1984.

Marked for a Mr McAllister, an Under Secretary in the same department, the document is dated 23 May. The working group had conducted “the most extensive survey of homelessness yet undertaken in Northern Ireland” which included detailed research into hostel residency and the background of hostel residents.

The group was not free to make recommendations but a range of voluntary organisations had called for specific legislation on homelessness and the Housing Executive taking on full responsibility for housing homeless people. The Callaghan Government’s Housing (Homeless Persons) Act 1977 had been introduced in Great Britain but did not extend to Northern Ireland.

For its part, the working group saw “no need for such legislation in the short term” as the existing law could help to develop “sensitive and realistic policies on homelessness.” Legislation could take at least two years to prepare. The “dual approach” in Northern Ireland involved social workers from the health and social services helping homeless people while the Housing Executive provided social housing which they would hopefully move into.

This approach was working “reasonably well” but there was also a “lack of co-ordination” and social workers were unwilling to become “intensively involved in what they consider to be a housing problem.” The Department of Health and Social Services and its area

boards apparently wanted to “shed responsibility” for temporary accommodation but Martin insisted that they “must not be allowed to walk away from this problem”.

He also maintained that the Housing Executive was “not a Local Authority” and “does not have the diversity of expertise available to Local Authorities and consequently cannot deal with all aspects of homelessness.” He also emphasised that the DoE was “willing to provide the capital to provide whatever accommodation is necessary to satisfy a proven need” but the management of specialist accommodation and social work needed to stay with health and social services.

The group called for a code of guidance on homelessness to be issued as soon as possible and “there should be no further delay in its issue.” The homeless charity Shelter was pressing for the group’s own report to be published but it, along with other voluntary agencies, had not yet given written evidence to the Assembly’s Environment Committee. The official surmised: “Perhaps they are awaiting publication of this report so that their evidence can be on the basis of a critical reaction to it.” He expected Shelter to make a “determined effort” to discredit the report.

The report was referred to the Minister, Chris Patten, who served at the NIO between 1983 and 1985. He then held a series of junior and Cabinet posts before losing his seat in the 1992 general election. Patten was better known in more recent times as the last Governor of Hong Kong and Chairman of the Independent Commission on Policing.