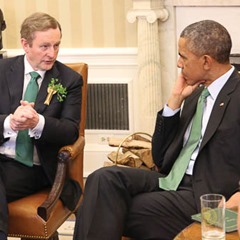 Visits to the United States for this year’s St Patrick’s Day took place against the backdrop of an unsettled political landscape. Ciarán Galway reports.

Customary St Patrick’s Day expeditions to the US have long afforded representatives from across the island much coveted access to the White House. While these occasions are consistently laced with optimism and aimed at attracting potential investors, recent developments around welfare reform served to complicate the proceedings.

Both First Minister Peter Robinson and deputy First Minister Martin McGuinness remained at home rather than travelling to Washington DC. Robinson used his Twitter account to announce his intention to stay in Belfast and asserted: “White House agree priority is to maintain momentum in finding a resolution to [the] welfare issue. Best to be in Northern Ireland dealing with it.” Meanwhile, McGuinness stated: “The number one priority for me and my party is finding a resolution to the difficulties currently facing the Executive … I have decided to focus on finding a resolution and will therefore not be travelling to the US to take part in events marking St Patrick’s Day.”

Sinn Féin leader Gerry Adams did journey to Washington before returning to New York to meet with Friends of Sinn Féin. Whilst in Washington, Adams attended the annual Friends of Ireland Congressional Caucus luncheon, hosted by the House Speaker at the US Capitol. Also in attendance were President Barack Obama, Vice-President Joe Biden and Taoiseach Enda Kenny, among others. Adams used a subsequent meeting with US State Department officials to raise a series of topics, including the Stormont House Agreement dispute, the proposed Pat Finucane inquiry and the undocumented Irish.

The Deputy Assistant Secretary for European and Eurasian Affairs, Julieta Valls Noyes, had also met with the SDLP’s Alasdair McDonnell and the UUP’s Mike Nesbitt the previous day. In a statement following his meeting, McDonnell commented: “Let me be clear. Despite the reckless politics played by Sinn Féin over the last week and the DUP many other times, doors in America remain open to the SDLP and to passionate, reasoned politics.” Commenting on Nesbitt’s meeting, a spokesman for the UUP said: “It was a private meeting with State. A number of contemporary and pressing issues were discussed. The party was keen to press the case for further foreign and direct investment given the commitment that [corporation tax] will be reduced to 12.5 per cent by 1 April 2017.”

However, it became apparent that initial plans for the Northern Ireland guests to meet with the Deputy Secretary of State Tony Blinken were cancelled and instead Noyes, a comparatively minor official, was selected to greet the visitors. State Department spokeswoman Jen Psaki later confirmed: “Given the ongoing efforts to reach a durable accord on welfare reform to get implementation of the Stormont House Agreement back on track, we postponed all of Deputy Secretary Blinken’s meetings with Northern Ireland officials until such agreement is reached. It included all officials coming.”

In his speech at the St Patrick’s Day reception, President Obama called for a resolution and noted: “Two people who were going to be here – First Minister Peter Robinson and deputy First Minister Martin McGuinness – are home hammering out the details to implement the Agreement. So we wish them good luck and Godspeed, so the people of Northern Ireland can finally enjoy the full fruits of a lasting peace.” The Taoiseach used to opportunity to urge the local political parties to do everything possible to ensure that the agreement is implemented in full.