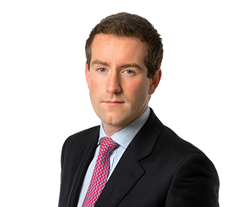 He joined the station in 2009 after working for the Northern Ireland Assembly and as an intern in Parliament and the Foreign and Commonwealth Office. Darren studied politics at Bristol University and broadcast journalism at City University, London.

How did your interest in journalism begin?

My interest in journalism began at quite a young age. Growing up in Northern Ireland in the 1990s, it was difficult not to be interested in politics, as it dominated all areas of life. And being interested in politics but not necessarily party politics, I always thought the best way of satisfying that interest was through the media and journalists who covered the Troubles and peace process.

So people like John Irvine, Denis Murray, Ken Reid and John Ware became my way of trying to understand what was happening and why it was happening.

What insights did you pick up when travelling overseas on your gap year?

Having studied politics at Bristol University, I worked for a short stint as a civil servant for the Northern Ireland Assembly at Stormont albeit at a fascinating time, with politicians and civil servants trying to get to grips with and understand the new rules of government. Unlike many MLAs, lots of the public servants on the hill had seen the Assembly in action before. I’m sure most politicians would agree their advice, guidance and help in those early days proved invaluable in enabling the transfer of power.

After Stormont, a friend and I went travelling, overland from London to Sydney. And while I had an enormous amount of fun, we did get exposed to very different cultures along the way from a Christian Europe, to Islam in Iran and Pakistan, to Hinduism in India, and Buddhism in Burma and South East Asia.

What I took away from that is how we really are, as humans, all the same. Yes, we grow up in different circumstances but we share a great many wants and desires: something that everyone from Northern Ireland should always be reminded of.

In your view, what is Sky News’ niche in the media?

Sky News was Europe’s first 24-hour news channel and has undoubtedly changed the face of news in the UK. Sky’s success is based on being first with the news and getting the facts and details right, being live where the news is happening and interviewing the key news-makers. And we are not just recognised for our domestic output but with bureaus across the world, we are winning awards for incredible and ground-breaking international news. 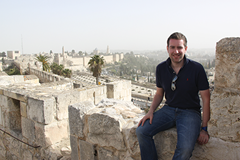 Which stories stand out in your reporting career to date?

I’ve so far covered a great range of stories from the legacy of the Olympic Games, the horsemeat scandal to flooding in England. What stands out, however, is the Jimmy Savile sex abuse scandal and the crisis that then engulfed the BBC. As a story, it had so many threads to it. From the sheer scale of Jimmy Savile’s abuse to victims who for so long weren’t believed and Newsnight’s failed investigation.

How much of your work involves covering politics or Northern Ireland? Are there any specialist areas that you would like to pursue?

I haven’t covered Northern Ireland yet. We have two fantastic Ireland correspondents in David Blevins and Vicky Hawthorne, who work incredibly hard to cover not just what happens on the streets of Belfast but all aspects of life in Ireland.

I am still very interested in what happens at home and in local and national politics. And hopefully Northern Ireland, and particularly my home county of Fermanagh, will put the province on the map for the right reasons when it hosts the G8 in June this year. It could a seminal moment at an important time for both the county and the province.

What do you enjoy most about journalism and what are the most challenging parts?

The best aspects are the most challenging. Arriving at a breaking news story, gathering all the information you can and translating that to viewers in a way that makes sense, with often not much time, really focuses the mind. The range of stories and diverse mixture of people that you meet and talk to ensure that no day is ever the same.

I’m a keen cyclist and am planning to cycle from the Giant’s Causeway to Dingle Bay in the summer; the weather had better hold up. I do like travelling abroad, reading and the theatre (one of the best aspects of living in London) and going home. Whether it is a night out in Belfast or a walk through the Crom Estate, it is very hard to beat Northern Ireland.