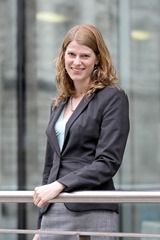 Colletta Smith is BBC Northern Ireland’s Business Reporter. Originally from York, she presents the business news on Good Morning Ulster on Radio Ulster and has been with the station for the last two years.

I’d like to say it was through careful career planning, but like most people’s careers, it was down to getting the right qualifications, doing unpaid work experience, and a good slice of luck. Having graduated with a degree in politics at Durham and realised I was qualified for nothing, I decided doing a postgraduate course at City University in London in broadcast journalism would be a much better route into journalism.

I managed to wangle my way into answering the phones for the Jeremy Vine show on BBC Radio 2 and Up All Night on BBC Radio 5 Live. I then got paid work for the Daily Telegraph online in London and then moved on to Newcastle to work on the Politics Show covering the North East of England.

What brought you to Northern Ireland?

BBC Northern Ireland was running a production trainee scheme that wasn’t anywhere else within the BBC. I have family over here, and thankfully BBC Northern Ireland let me in. It’s certainly always referred to as a great place to really learn your trade as a journalist and that’s what I was keen to do.

Please describe a typical working day in your job.

I’m in work at 6am, which never gets any easier no matter how long you’ve done it for. Thankfully the adrenaline kicks in early as it’s very busy between 6am and

I normally have at least three different stories, with two different guests each morning, so a big part of the job is just keeping up with where I’m supposed to be and what I’m supposed to be talking about at any moment. After 9 o’clock things calm down. Sometimes I do slots on Talkback or BBC Newsline but most days I can spend the rest of the time finding stories, and guests, and deciding on the business news agenda for the following morning.

What are your main impressions of the local business community?

My initial impression was that people within the business community were very private and often reluctant to tell even ‘good news’ stories. When I started the job two years ago, I used to spend a long time just convincing people to talk to me live on-air but as people have heard how the format works on Good Morning Ulster, and realised that I am not trying to catch them out, then people have really opened up.

Which stories stand out as the most significant to date?

The Ulster Bank crisis last summer was obviously hugely significant, both for personal and business customers, and any stories about Ulster Bank have a huge impact because they are such a giant in our local banking market. It was brilliant to be in Enniskillen for the G8, and to be reporting on a story of global significance happening in our own back yard.

I had only been in the job for a month when the euro zone crisis began so it was certainly a baptism of fire to try and explain what was happening during the Greek bail-out, but it has been fascinating to watch the impact of that story both locally and internationally over the last couple of years.

Who has been the main influence on your career?

When I was a student I did some work experience at Radio York, and someone there really explained to me the power of radio. She said never to forget that for many people the radio is the first voice they hear in the morning. It sets the tone for their day, and often provides company throughout everyday life – in the kitchen, in the car, wherever they are.

That advice has really stuck with me and has certainly been confirmed in my own experience. It’s always funny meeting people for the first time who say: “Oh Colletta, I have breakfast with you each morning!” Knowing that you really are speaking to individual people has shaped the way I try to broadcast.

Having an afternoon snooze is my favourite way to relax, but in terms of hobbies I sing in a small chamber choir which I love. No matter what mood I am in when I arrive at rehearsals, spending a couple of hours singing can’t fail to put you in a better frame of mind. I play tennis for a local club too but I’m gradually realising that my dream of winning Wimbledon is looking less likely with every year that passes.