Police, who chose to use resources to arrest and investigate two journalists who exposed RUC collusion and loyalist murderers in a documentary rather than to use the resources to launch an investigation into the details, have dropped their care against Trevor Birney and Barry McCaffrey, writes David Whelan.

The PSNI confirmed that they were dropping their investigation days after High Court judges ordered the PSNI to return items seized from the journalist’s homes, stating that search warrants issues against the pair in August last year were “inappropriate”.

The Lord Chief Justice, Declan Morgan, rebuked police for their raid on the homes, described by a barrister as “a police state-style arrest operation”, in the wake of the release of their award-winning documentary ‘No Stone Unturned’.

The documentary, which exposed details and names of people involved in the 1994 massacre of six people in a bar in Loughinisland by UVF gunmen, for which no one has ever been convicted, named the main suspects and questioned contacts between police and the alleged killers.

The arrests of the two journalists were made on the basis that they were under suspicion of stealing an unredacted document related to a Police Ombudsman investigation into the killings. The Ombudsman, whose 2016 report concluded the security forces colluded with the UVF killers, has denied making a complaint of theft.

The journalists have also highlighted that the police and those named in the documentary were given advance warning of its contents, with those accused given an invitation to respond.

The “attack on press freedom”, as described by McCaffrey, led to widespread support for the two journalists, including from Conservative MP and former Brexit Minister David Davis, who attended the challenging of the legality of the search warrants in a judicial review.

Davis said that he attended the trial to support press freedom, which he added protects all the other freedoms in modern society.

“Their cause is so important it should be known throughout the whole of the UK and the rest of the world.”

Ordering that seized material should be returned, Justice Morgan said that evidence supplied did “not indicate that the journalists acted in anything other than a perfectly proper manner with a view to protecting their sources in a lawful way. We consider that in any event in the light of the legal authorities that the execution or granting of the search warrant was inappropriate.”

Following the conclusion of the trail, the Durham constabulary, who led on the investigation, and their PSNI partners announced that they were no longer investigating the journalists over their work.

Outgoing PSNI Chief Constable George Hamilton said that he agreed with the decision and added that police still hoped to find the murderers. “The perpetrators of that crime have never been brought to justice and that is a matter of huge regret for policing,” he said.

However, significant criticism has been levelled at the amount of resources put in by the police to investigate the two journalists rather than to launch a fresh investigation based on the material within the documentary. Hamilton has said that while the investigation into the killings remains open, progress is dependent on new information. 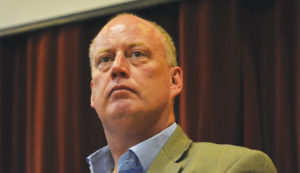 The arrests of two journalists for their investigation into the murder of six people over 20 years ago, for which no one has ever been convicted, is just one of a series of blots on the reputation of the PSNI while George Hamilton has been at the helm. Hamilton, who surprised most with his announcement that he was to retire earlier this year, leaves at a time when confidence in policing is at a very low ebb, stemming from a range of issues.

The Chief Constable has been criticised for his force’s inability to properly tackle legacy cases in Northern Ireland. Hamilton has commonly cited insufficient detective resources in handling outstanding cases of the Troubles, stating last year that he was “in an impossible position” over legacy issues. However, the PSNI have come in for accusation that they have failed to appropriately share information to victims’ families and the Police Ombudsman.

Hamilton has also failed to make any significant progress in the long-standing flags issue in Northern Ireland. The PSNI have been routinely criticised for failing to intervene in the erecting of illegal or contentious flags and have only on rare instances, removed such flags. Similarly, there is recognition that the PSNI have in recent years failed to stem ongoing recruitment of young people to paramilitary groups. The murder of journalist Lyra McKee in Derry earlier this year by dissident republicans brought into sharp focus for some that such groups remain relatively unchallenged and that police do not have a sufficient grip on their activity. In 2017, the number of punishment shootings and beatings in Northern Ireland had increased by 60 per cent from the year before Hamilton’s appointment.

There are also question marks over whether Hamilton retained the support of his own force. In 2016 he was forced to apologise to fellow officers after a twitter user challenged his call for people to consider a career in policing by pointing out the increased complexities of the role were putting increased pressures on officers. Hamilton originally suggested that a more complex and challenging environment need to be got on with “rather than wallowing in self-pity” adding to another response “Well you’re allowed to leave & seek another job – nobody is asking you to stay. Dry your eyes, do the job or move on!”

Hamilton’s inability to reshape the PSNI to represent the community it serves will also be a major part of his legacy. He recently took a departing shot at the political class in their failings to support the PSNI. Specifically, he stated that the nationalist community should encourage more Catholics to join police ranks. Many thought that Hamilton’s comments were aimed at deflecting blame from the fact that PSNI management has not been able to address the imbalance of Catholics and Protestants within the force. 50:50 recruitment to the PSNI was ended in 2011 and by 2018 just 20 per cent of new recruits to the PSNI were Catholic. Currently Catholic representation in the force is around 32 per cent, however, this is not reflected at senior level. Over 20 years after the Good Friday Agreement, Of the 68 officers above the rank of superintendent, just eight (11 per cent) are from a Catholic background according to PSNI figures published in 2018.