Ahead of May’s Assembly election, new UUP leader Doug Beattie MLA discusses his vision for confident unionism, a desire to be First Minister and his rejection of electoral pacts.

“Life comes at you fast,” quips Beattie, when asked why he opted to take up the party’s top post in May 2021, having twice before rejected calls to put himself forward.

The former soldier points to his desire to serve his “apprenticeship” as an MLA as the deciding factor in not putting himself forward to replace Mike Nesbitt, the man who brought him into the party, in 2017.

Beattie is aware that he is not from political stock and only entered the political arena as a local councillor for Portadown in 2014, joining the Assembly two years later. His desire to continue learning was also a factor in his decision not to contest for the party leadership again in 2019, as too was a will not to trigger a leadership contest at a time of Brexit uncertainty.

“I thought Steve [Aiken] was best placed at that time,” he admits candidly.

How long of an apprenticeship Beattie hoped to serve is unclear however, because Aiken’s resignation as leader, believing he had taken the party as far as it could go, saw Beattie emerge uncontested to take up the role.

As the party’s fifth leader in just nine years, he is faced with the daunting prospect of turning around the fortunes of a party that has just 10 MLAs and no MPs with less than a year before the next Assembly election. Interestingly, the Upper Bann MLA appears set on defining his era by a change of manner, rather than a policy shift.

Characterised as a liberal unionist, Beattie’s open support for abortion reform and same-sex marriage grated with some conservative unionists, including within his own party, however he has no desire to drastically reform the party or shift from its core values.

Instead, he says he believes he can utilise the trend of “personality-driven politics” which has drifted into the UK, to better communicate the party’s vision for Northern Ireland.

“I don’t have a huge political background, but I have spent a lot of time in leadership roles,” says Beattie, alluding to his decorated military career. “I understand leadership, both transactional and visionary leadership, and I understand how you change and how you motivate.

“I feel that I have the personality to promote that confidence and lift the morale of the people around me.”

Beattie views his unique position of leading three former leaders within his party’s Assembly team as an advantage rather than a hinderance. Highlighting the personal friendship he shares with Mike Nesbitt, Robin Swann, and Steve Aiken, he says that those who have stood in his shoes appreciate and understand the difficulty that comes with decision-making, leading to a supportive environment.

In October, Beattie presided over his first annual party conference, promoting a ‘union of people’ as the party’s vision. The vision was well received by those in attendance, with many pointing to the “Beattie bounce” as underpinning a noticeably upbeat and optimistic mood among party members. The term is not one Beattie himself favours, potentially because it insinuates that changing fortunes may only be short-term.

His arrival as leader coincided with unprecedented internal party strife within the DUP and coupled with the ongoing challenges of the Northern Ireland Protocol, poor polling by unionism’s largest party has, to many, presented a huge opportunity to the UUP to improve its representation at Stormont.

The UUP leader, however, is adamant that the party’s progress is of its own making: “We’ve seen change on a number of fronts. Internally, we have seen hundreds of new members join the party in recent months, where previously numbers had been much smaller. We are also seeing members who had previously allowed their membership to lapse buying back in because people like our vision and are willing to re-engage.

“Externally, I have engaged with people outside of Northern Ireland and many of them are telling me that they our hearing our vision that they are hearing confident unionism for the first time in a long time after many years of negative and pessimistic unionism.”

In the past the UUP has suffered from an inability to put clear blue water between itself and the DUP in the minds of the electorate, come election time. Calls to protect wider unionism have seen the party seem the less attractive option for unionist voters when faced with the prospect of a split unionist vote.

Selling the party’s vision has not been helped by electoral pacts with the DUP. Beattie is adamant that the party will not engage in pacts while he is at the helm.

“Pacts do not work for the long term,” he states. “They do not improve your standing or your vision for the future. When you stand on your own two feet, people will say, ‘that is the confident unionism I want to see’.” 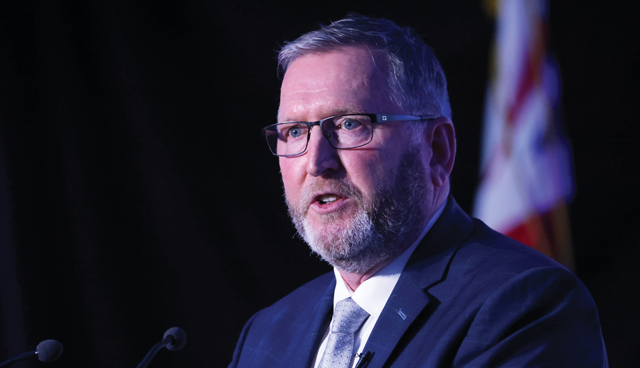 For some, Brexit presented a prime opportunity for the UUP to offer a clear alternative to the pro-Brexit campaigning of the DUP. However, such a policy failed to materialise, with individual representatives, members and voters openly contesting the party’s decision to oppose Brexit.

Beattie admits that the Brexit argument was “deeply damaging” for the party. Highlighting that senior party figures such as Mike Nesbitt MLA and former MEP Jim Nicholson warned of the potential of an Irish sea border and checkpoints at ports prior to the referendum, Beattie believes that following the referendum outcome the party was left with no choice but to accept the democratic vote.

However, he emphasises that acceptance of the outcome of the vote did not prevent the party working hard to warn of the consequences of the Protocol and currently, putting forward potential solutions to current frictions.

The leader believes that Brexit has had a detrimental impact on electoral politics in Northern Ireland, stating that politics has “doubled down on being sectarian”. Describing an ‘us against them’ mentality to the 2017 Assembly election and 2019 Westminster election within the electorate, both of which saw the UUP lose electoral ground, he believes the “sensible voice” is being drowned out.

That sensible voice, he states, is stressing that some form of compromise will need to emerge between the EU and UK Government, which in turn will affect Northern Ireland.

“We always have been and always will be something apart from the rest,” he states. However, he emphasises that the Protocol in its current form is not working and points to areas such as “inbuilt instability” in the consent mechanism which will periodically ask for Assembly consent to the trading arrangements in articles 5–10 of the Protocol and the democratic deficit created by the absence of Northern Ireland representation at the negotiating table, as needing to be addressed.

“What we need and what business needs is stability,” he emphasises.

Beattie is aware that the party has suffered from the absence of representation at Westminster. In 2017, the party lost its two MPs and in 2019, Beattie himself was among candidates who failed to regain a seat.

He believes the DUP’s conduct in Westminster, utilising the holding of the balance of power to “put their hand out and ask for money”, reduced Northern Ireland down in the estimations of neighbouring regions and failed to grasp the opportunity to secure safeguards for Northern Ireland’s place in the UK.

He concedes, however, that without representation the UUP’s criticism of how the DUP acted in Westminster is somewhat toothless.

In 2016, then leader Mike Nesbitt took a bold decision to lead the UUP into Stormont’s first official opposition, alongside the SDLP. In the subsequent election, the UUP lost a number of key seats and figures, largely attributed to Nesbitt’s statement that he would give the SDLP his second preference vote. However, yet to be determined is whether opposition is viable.

Beattie says that the prospect of the party entering opposition is “always on the table”. In fact, the leader admits that he had advocated for the party to enter opposition following New Decade, New Approach while justice spokesperson for the party, believing that “opposition promotes good governance”.

He admits that the decision by the party to enter the Executive has proven a good one, allowing former leader Robin Swann MLA to lead on the health portfolio but adds: “I still believe a properly funded and properly structured opposition is fundamental to good government. As party leader, if I decide to enter opposition then it will be up to me to sell that to the party but it is not a decision I have made yet.”

Beattie laments the unique nature of governance in Northern Ireland which sees parties rush to form a government and subsequently draft a Programme for Government (PfG).

“There is a case to be made that following an election, prior to government formation, you have your PfG ready to go, and government nominations are based on the PfG.”

On the topic of governance, Beattie advocates further change to ensure Stormont’s future is long lasting, stating: “We have an opportunity in the 25th anniversary of the Belfast/Good Friday Agreement to give the institutions an MOT. Is it producing good government? What has changed in society and what do we need to reflect on that basis?”

Describing the St Andrews Agreement as a contributor to “sectarianising politics” in Northern Ireland, Beattie suggests a return to the Good Friday Agreement’s “factory settings”. However, he is adamant that any change must be done not only with Northern Ireland’s political parties but also through engagement with wider civic society.

Concluding, Beattie continues to push his message of confidence, outlining a post-election ambition to be First Minister. It is for this reason he refuses to be drawn into how the party would react to, as could happen, Sinn Féin becoming Northern Ireland’s largest party.

Offering his vision for the year ahead he says: “I want to continue improving the UUP, improving our membership, our status in Northern Ireland and our standings in the Assembly. We are reaching out to the US and across Europe to spread our message of unionism.

“I would like to look back in a year and see a confident UUP taking centre stage and where people want to hear our message.”