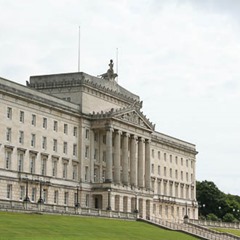 Peter Cheney analyses the Executive’s new financial plans and their implications for public services. The Budget will mark the start of a period of austerity as pressure on the block grant grows.

After several months of brinkmanship, the DUP and Sinn Féin have finalised a Budget for the 2015-2016 financial year.

Three Executive departments will see their resource budgets grow. As expected, the Department of Health, Social Services and Public Safety will experience the largest numerical increases – an extra £164 million for hospitals and an extra £102 million for social care. Overall, the department’s budget will rise by 3.4 per cent.

The Department of Enterprise, Trade and Investment’s 10.1 per cent rise is driven by a boost for economic development and tourism promotion. OFMDFM also receives a small increase (3.2 per cent) for community relations projects.

Ministers highlighted an extra £80 million for the education budget. This represents the difference between what was envisaged in the draft Budget and what was agreed in the final version. However, the actual budget will decrease by £40 million between 2014-2015 and 2015-2016. Unlike other departments, the Department of Education has not yet published a detailed breakdown of how this money will be spent. It will, though, protect schools’ delegated budgets and reverse planned budget cuts in pre-school education and youth services.

The policing and community safety budget will lose £28 million (-3.7 per cent). The Assembly initially expected a spending freeze but will now face a £20 million cut (-5 per cent).

Capital budgets are harder to compare on a year-to-year basis as they depend heavily on the cost of individual projects. The Department for Regional Development will have largest single capital budget (£328 million) to be mainly spent on roads and water. The capital budget for health amounts to

£210 million, mostly for hospitals but with £30 million set aside for primary care facilities.

Capital spend includes a total of £88 million from financial transactions capital (FTC). This falls outside the strict definition of capital expenditure but includes loans to or equity investments in private sector entities by the public sector.

Annually managed expenditure fluctuates according to demand with the two largest items being benefits (£5.7 billion) and pensions (£2.5 billion). Welfare reform will be largely implemented but the Executive will be allocated £27 million to offset some changes.

The Budget was opposed by the SDLP, UUP and Alliance Party. Finance Minister Simon Hamilton stated that it had stabilised the Executive’s finances and would help to fund a future cut in corporation tax. He also announced plans for a £40 million investment fund for priority infrastructure projects and a £5 million social innovation fund, which will generate loan finance from dormant accounts.

Hamilton said that the Budget was “in better shape” following the Stormont House Agreement and recent Barnett consequentials but the hardest decisions were still ahead.

“No Budget would have meant no Stormont,” he stated. “It may not be ideal or to everyone’s satisfaction but agreeing it, in the context of severe pressures on public spending, represents a sign of growing maturity. It should act as a stimulus as we step into a future full of challenge.”

Sinn Féin’s finance spokesman, Daithí McKay, said that his party had continued to protect front-line public services. However, SDLP MLA Fearghal McKinney questioned McKay’s assertion as the Executive had not defined the front-line and the Budget included a cut to the Fire and Rescue Service.

Some of the strongest criticism came from the UUP and Alliance Party. Danny Kennedy remarked that the Budget was “another Sinn Féin-DUP carve-up” but was pleased to have maintained the concessionary fares scheme.

David Ford said that the system still contained “massive inefficiencies” and the Budget “will leave us in exactly the same position next year.” Alliance maintains that water charges (linked to usage and ability to pay) would free up £230 million for other public services.

Agreement on the Budget will allow for the introduction of welfare reform and more progress on corporation tax devolution. However, it is clear that the new UK Government will continue to face major financial challenges which will in turn impact on the block grant. In the light of planned cuts by Labour and the Conservatives, Northern Ireland can expect a more austere Budget in 2016.

As explained, £20 billion of public money is spent in Northern Ireland each year. The Stormont House Agreement promises to deliver up to £1.7 billion in additional funding over the next 10 years, mostly in loans (£1.05 billion). The remaining £650 million represents new money. The agreement allows for £300 million in loans in 2015-2016 – 1.5 per cent of total public spending – for two specific purposes: the voluntary exit scheme and infrastructure development.