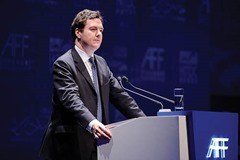 The UK Budget indicates the continued challenge of reducing the deficit.

Pension reform was the dominant theme in George Osborne’s Budget although it received little attention from local political commentators. The devolution of corporation tax was notably omitted in the main parties’ press statements, although the CBI continued to openly press for it.

Restrictions on access to pension pots will be removed from April 2015. Pensioners will still be able to draw down 25 per cent of their pension when they reach retirement age but taxes on further withdrawals will be reduced. This is likely to reduce the need for purchasing annuities.

Osborne expects the Exchequer to have borrowed £108 billion in the outgoing financial year. In contrast, he had planned to bring that down to almost £80 billion by this point (half of the borrowing peak of £159 billion). Slow progress on cutting deficit will mean deeper spending cuts in the next Parliament unless economic growth makes up more of the shortfall.

This Budget cannot be fully described as ‘an austerity Budget’ as the Executive will receive an extra allocation of £21.2 million over the next two years.

Finance Minister Simon Hamilton welcomed the increased personal allowance, changes to the starting rate of savings income tax, and plans for tax-free childcare. A “sustained period of budget constraint” for the public sector, Hamilton said, was an opportunity to improve services despite smaller budgets.

Sinn Féin’s Daithí McKay condemned the cap on the welfare budget which would reduce the disposable incomes of people receiving benefits. The Coleraine enterprise zone – the first in Northern Ireland since 1983 – would be “cold comfort” to those who had lost their jobs in the DVA office closure.

To the SDLP’s Patsy McGlone, the enterprise zone was a “useful small step” but he questioned the rationale for locating it in Coleraine when more deprived areas could have benefitted. The Executive’s multiple deprivation measure identifies inner city Belfast, Derry and Strabane as the most disadvantaged districts.

Alliance MP Naomi Long called for a cut rather than a freeze in fuel duty. Without that move, Long warned that regional competitiveness would be “severely damaged” and personal budgets “strained even more than they already are during the current economic climate.”

CBI spokesman David Fry said that the increased annual investment allowance “will be a shot in the arm for many medium-sized businesses.” An enterprise zone “may have some localised regeneration potential” but was only likely to benefit large, capital-intensive and profitable companies.

Nevin Economic Research Institute economist Paul MacFlynn analysed the Budget for ICTU. “Real wages have been falling for several years and low pay is becoming a huge problem,” he commented. “We need policies to strengthen wages and earnings, not subsidies for low pay employers.”