The welfare reform dispute resulted in a tense political atmosphere at Stormont. A more positive theme was taken up by the Speaker in his call for increased tolerance in society.

March’s business at Stormont commenced with Peter Robinson’s statement on reducing the number of departments, to take effect after next May’s Assembly election. This was immediately followed by the introduction of the Special Educational Needs and Disability Bill and consent for the Health and Social Care (Safety and Quality) Bill, which places a duty on the health professions’ regulators to protect the public.

On the next day, the debate on the naming of the Raymond McCreesh playground in Newry divided members. Sinn Féin defended the decision, which was opposed by all other parties. Likewise, the party’s withdrawal of support for welfare reform prompted widespread criticism. The SDLP and Green Party, though, were content that Sinn Féin was willing to sign a petition of concern to halt the legislation.

Tributes were paid to the late James Molyneaux on 9 March, with Mike Nesbitt giving thanks “for a long life well lived in the dedicated service of his people.”

Against the backdrop of the welfare reform dispute, DUP MLA Paula Bradley anticipated that a motion on women in politics would not “get as much as five seconds on the news tonight.” She recalled how she was a single parent of two children by the age of 23 “and still managed to break into political life.” 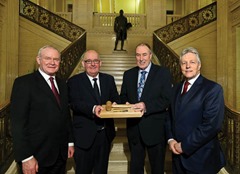 Bradley had recently met a cross-community women’s group from Ardoyne which wanted to talk about health, education and tackling drug abuse. “Way down at the bottom of their list were the orange and green issues of Twaddell and the parade,” she stated frankly. “That was important to them but other issues were much more important. We need to look at how we deliver our politics and send out the strong message that we, as an Assembly, do many more things than argue and debate over orange and green politics.”

Another conciliatory note was struck by Mitchel McLaughlin at his St Patrick’s Day reception. The Speaker commented that achieving “a balance in this society, which demonstrates a respect to all without being deliberately provocative, should be of no threat to anyone.” Parliament Buildings were “bathed in green” to mark the day (after going purple for International Women’s Day) and would have an “orange glow” for the Twelfth and go red for Remembrance Day. The proposal was brought forward by Alliance MLA Judith Cochrane.

“My approach is simple,” McLaughlin added. “You can’t expect anyone else to respect your culture if you don’t respect theirs.”

The House rose for its recess on 28 March and will return on 13 April. However, the remainder of the month is expected to be quiet at Stormont as several MLAs are running for Westminster and most of their colleagues will also be on the campaign trail.