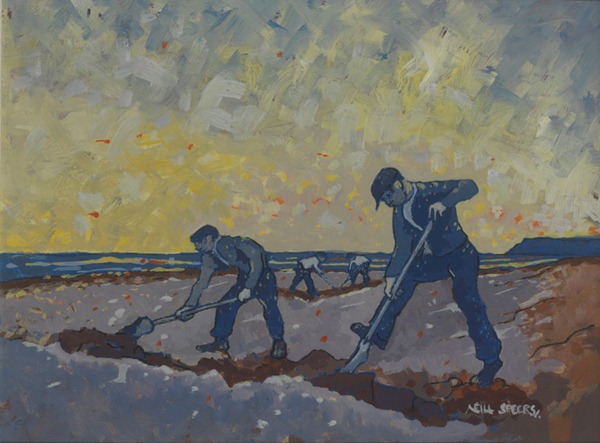 Peter Cheney looks at how water and its impact on man have inspired works found in this year’s exhibition of public art.

Water is the main theme running through the public art on display at the Linenhall Library this month. The ‘Flow’ exhibition centres on man’s relationship with water and is on display until 23 October.

Admission is free and 40 works, owned by the Irish Government and Northern Ireland Executive, are on show. Artists include TP Flanagan, Patrick Collins, William Ashford and Basil Blackshaw.

“The artworks selected describe this relationship in many of its forms such as transport, leisure, work, power and sustenance,” curator Aaron Boyd remarks. Scenes of seascapes, ships, harbours, rivers, lakes, beaches, marine life and watermills are included. 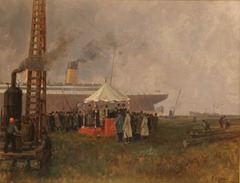 Water also influenced the choice of venues with each one being a port or centred on a major river system.

Boyd’s personal favourite is ‘Driving the First Pile’ – not just because of the painting’s quality “but because it captures an era in the history of Belfast when it was at the forefront of industry and technology.”

“There is a certain amount of pomp and ceremony on show,” he adds, “that seems to reflect the self-confidence of the city in striving forward and its willingness to make its mark on the world map.” 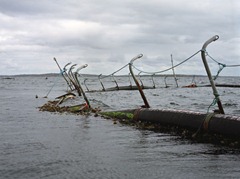 ‘DeLorean: Progress Report’ focuses on the final resting place of parts of the doomed plant.

“In the image we can see the metal frames that once were used in the high-tech factory protruding out of the water as part of a rusting fish cage off the coast of Galway; an anonymous and depressing end to such a glamorous and optimistic enterprise.”

What makes water unique in art?

Water is an interesting visual subject because of its continually changing physical states and the way in which it is affected by its environment.

Whether it’s a blue, calm sea or grey, crashing waves, both have their own beauty. Similarly, we all know the magical effect of the refraction of sunlight through a shower to produce a rainbow or the reflection of the moon off a glass-like lake.

Waterfalls, whirlpools, icicles, misty mornings and snowy peaks all capture our imagination and provide wonderful inspiration for an artist.