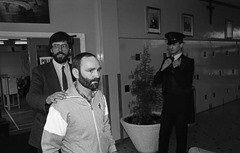 Sinn Féin’s Alex Maskey became the party’s first councillor in Belfast since the 1920s when he won a by-election in 1983. The NIO viewed this as an indicator of his party’s rising support.

The election of Belfast’s first Sinn Féin councillor during the time of the Troubles drew a calm response from the NIO official analysing his win. Alex Maskey was elected in a by-election for Area D – covering Suffolk, Andersonstown and Whiterock – in June 1983 and an assessment was written up immediately after the count.

DG McNeill of the Political Affairs Branch commented that “given their performance in the Assembly and General Election in that area the success of Sinn Fein was to be expected.” Maskey won with 7,858 first preferences: 48 per cent of the vote. He added: “The result will be another boost to the morale of Sinn Fein and confirms that their support is holding up well. However they will be a little disappointed that their candidate did not manage to get elected on the first count.”

Maskey was elected on the second stage of the poll, called after the resignation of former Irish Republican Socialist Party (IRSP) councillor Gerry Kelly. Sinn Féin had not stood in 1981 but it had “managed to capture the votes” which had previously gone to independents, the IRSP and People’s Democracy. The party had also reduced the SDLP’s poll share from 42 per cent to 32 per cent but the SDLP “will take some comfort” from holding about a third of the vote in “an area where they have not done well recently.”

The official noted: “There were also reports of significant personations and a total of 27 people have [been] charged with personation so far.” He did not link the fraud to any single party or candidate.

Support for the Alliance and Workers’ Party candidates “remained much the same as in 1981” but the IRSP’s Jimmy Brown – a remand prisoner – only attracted 2 per cent of first preferences votes. “The Sinn Fein candidate confirmed in a radio interview that he would take his seat on the Council,” the note concludes.

Maskey stood down from Belfast City Council in October 2010 but continues as an MLA for South Belfast. He was the second Sinn Fein councillor elected as part of the ‘armalite and ballot box’ strategy, the first being Seamus Kerr in Omagh in March 1983. The party had already contested the previous year’s Assembly election but refused to take its seats in protest against partition. It recognised the Assembly in 1998.

Co-option has traditionally been the preferred way to fill council vacancies but by-elections occurred when fellow councillors refused to accept the nominee. Smaller parties tended to lose out but the polls sometimes caused upsets for larger ones.

The DUP’s failure to win the 2008 Dromore by-election contributed to the resignation of Ian Paisley as First Minister. The party ran Enterprise Minister Arlene Foster in the Enniskillen by-election later that year, to prevent a similar outcome.

All the main parties supported a NIO proposal to end council by-elections and the last one took place in May 2010. DUP candidate Sharon Skillen was elected to Castlereagh Borough Council after the resignation of Iris Robinson. There are no plans to re-introduce by-elections in the new councils to be formed in April 2015.