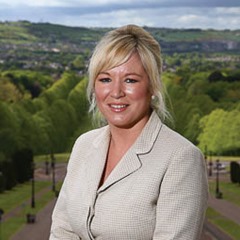 Agriculture and Rural Development Minister Michelle O’Neill discusses the prospects for the agri-food industry with Peter Cheney. Once seen as a sunset industry, farming is now regarded as a key contributor to economic growth.

Economic news has been dominated by “negative story after negative story” in recent years, Michelle O’Neill reflects, but the agri-food sector is “still continuing to grow” despite the crises it has faced.

“Years ago, it would have been thought of as a sunset industry,” she says of farming, adding that DARD would have been seen as one of the lesser departments. As a sign of change, O’Neill points to the Programme for Government commitments for the sector, which include publishing the Executive’s agri-food strategy: ‘Going for Growth’.

“It’s a fantastic report and the beauty of it is it’s been industry-led,” O’Neill remarks. Two years into office, O’Neill mentions that the recent crises in agriculture have given her “a very busy time” as Minister. Severe snow, fodder shortages and the horsemeat scandal have all tested the industry. Strategically, she has been “very much making this department an economic department” which reflects agri-food’s growing value.

Decentralisation is a particular priority for the Minister. DARD announced last September that its headquarters will be moving from Stormont’s Dundonald House to Ballykelly, outside Limavady. This May, DARD announced that the Rivers Agency and Fisheries Division will both move out of Belfast, to Loughry College and a South Down location respectively.

“For me, that’s a big win. It’s just great to be able to say that this is the first department that has actually moved out,” she adds.

Decentralisation, it is put to her, is a matter of moving jobs around rather than creating new jobs. She responds by saying that it will create “greater opportunities” for DARD staff; every grade will be moving out of the city. Up to 1,400 civil servants living in the north west may wish to transfer to Ballykelly. Some jobs will also be created in construction and building maintenance and the “throughput” will help to regenerate the village.

“It’s about a fair distribution of public sector jobs,” O’Neill contends. That said, the number of DARD staff has fallen from 4,117 in March 2007 to 3,041 in December 2012. She says that the number of staff is currently “appropriate” for the department’s work and she has no “major plans for changes in the workforce”.

Fairness in the supply chain is the most important result that O’Neill wants to achieve from ‘Going for Growth’.

“Very often, the farmer was the poor relation in the whole supply chain,” she relates, noting the farming unions’ campaign on poor returns for producers. The strategy recognises that there is a single supply chain and that all players “need to be treated equally if we’re to be successful in the future.”

While the strategy is challenging, she is confident that its targets can be reached through “partnership working” between the public and private sectors. The industry is seeking £400 million of investment from the Executive to leverage in £1.3 billion from the private sector.

Much of the groundwork will involve streamlining processes in the department, in response to farmers’ complaints about bureaucracy. Details will become clear after the Common Agricultural Policy reforms and the new Rural Development Programme are finalised in Europe. Working out the practical consequences of CAP will be the hardest part and “flexibility has to be the key issue here.”

DARD’s three priorities are a fair budget, flexibility and simplification of rules and regulations.

Some farmers felt that the department was slow in responding after the March snow storms. In response, O’Neill says that DARD’s response was “fairly positive”. In the first days, the focus “had to be on the human aspect” i.e. getting food to isolated people and clearing the main roads.

“If the main roads weren’t cleared, you weren’t getting anywhere near anybody’s farm,” she states. “It was as simple as that.”

Payments from the Executive’s hardship fund were due to start at the end of June. She commends DARD officials who were working in “really atrocious conditions” and those from other departments and the voluntary sector: “For me, it was a good example of everybody working together.” 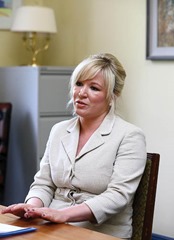 The hardships experienced by farmers, especially during the snow, are one reason why local politicians are reluctant to challenge the sector. However, even in relatively good times, there is little public criticism from MLAs.

When it is put to the Minister that the sector is a vested interest, O’Neill says that the agri-food strategy asks everyone to “look at how they can do things better.” Practical support for farmers is “not always about giving them money” but it can include benchmarking farms and asking them to get the best value out of their business.

“We have a changing climate,” she continues. “We are going to have to adjust our farming practices so it’s about looking towards how can I, through the department, through CAFRE [the College for Agriculture, Food and Rural Enterprise], work with the farming industry themselves.”

O’Neill sees the Minister’s role as being the “champion” of farmers and rural communities and says that the Executive needs to do “everything we can” to make sure that farming is sustainable and competitive.

She also acknowledges that she doesn’t always agree with the farming unions as, by their nature, they will stand up for their members’ interests first.

Her main priorities for the remainder of the Assembly term are to oversee decentralisation and the outcomes of CAP reform.

Sinn Féin, she notes, “have brought a particular sea change in policy” in DARD by tackling poverty and isolation. This covers a wide range of issues, including youth employment, access to mains water through bore wells, and going door-to-door to highlight which social security benefits are available to householders.

Rural broadband is a “massive issue” and rural dwellers are “very frustrated” when telecoms companies claim to offer 100 per cent coverage of the region: “It’s not the case.” At present, she is working with 150 farmers in a Tyrone community who have no access to fixed line broadband.

The Minister recognises that there will always be pockets which fixed line broadband cannot reach but all other areas need to be properly serviced, at no extra charge to rural householders. This is a “basic service” and people should not have to pay more because of where they live.

Her predecessor, Michelle Gildernew, had brought forward a Forestry Act to open up forests to more social and recreational uses. To pick up on one example, the new mountain biking tracks will bring health benefits and also boost tourism as they are among the best in Europe.

Pressed on her own ambitions, O’Neill says that she will continue in post as long as the party wishes. She explains that she was previously health spokesperson in the last Assembly term. After pausing briefly, the Minister adds: “I like the economic end of things but I’m always happy to take on whatever role is suitable at the time.” 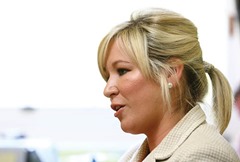 Michelle O’Neill visited China last November along with Enterprise Minister Arlene Foster and the First and deputy First ministers. Memoranda of understanding were signed between the Agri-Food and Biosciences Institute and two Chinese agricultural science institutes.

Following that “very positive” engagement, she has been invited back to attend a major agricultural exhibition in Shanghai in September: “Get a small piece of Shanghai and see what difference that will make to our local economy.”

Sinn Féin’s Assembly manifesto pledges to “oppose student fees – including any increases”. However, CAFRE will increase its main fee from £1,380 to £1,425 from this September.

Pressed on this, O’Neill replies that CAFRE operates on parity with other local colleges and therefore has a real-time freeze in fees. This policy applies to full-time higher education students from Northern Ireland and the EU.

Students from Britain, though, will face a tuition fee of £9,000. “That’s the position that the Executive has taken across the board,” she states. “In an ideal world, yes, Sinn Féin would not have student fees but we’re in an Executive where we have to be partners with the other parties.”

DARD has a large resource budget (£220 million per year) which could offset fees.

“It sounds very simple but, in practical terms, it’s not,” O’Neill replies. The college is also “oversubscribed” and that shows “a promising future for the industry.”