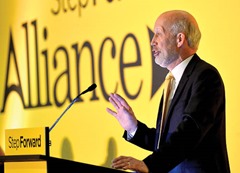 East Belfast was the focus for all delegates at the Alliance Party conference with the party viewing Naomi Long’s potential re-election as the next step in its growth. Peter Cheney reports.

There was no doubt that keeping East Belfast was the major challenge in Alliance Party members’ minds as they gathered for their annual conference in March. However, there was also a sense among delegates that regardless of the final result, the party is on a clear upward trend. Alliance was boosted by its 41,769 first preferences in last year’s local elections and Anna Lo’s poll (44,432 votes) on the same day. Ten years ago, its support base was around the 30,000 mark.

While the party has increased its size and influence – the conference’s move to La Mon in recent years being a sign of growth – its conference still has a fairly informal and family-like atmosphere. Welcoming delegates, the party’s President Andrew Muir opened the conference with a “céad mile fáilte” and recalled that the province has “changed beyond recognition” since its first conference in the Ulster Hall in March 1971.

“We’re all minorities now in a complex and diverse Northern Ireland,” Muir commented but he added that political attitudes needed to catch up with those in society at large. The decision to retain separate teacher training colleges, the dispute over welfare reform, and the continued loyalist protests at Twaddell Avenue were cited as examples of deadlock. Naomi Long’s re-election would prove that “change does actually happen” and would repeat that “positive step forward.”

David Ford stated that Alliance had “a united, strong determination to take all of Northern Ireland forward, not like those who are hung up on taking one constituency back.” He was pleased that Alliance Party members were “absolutely united on the fundamentals” of a shared future and could have “rational, thoughtful discussions” where they disagreed. As expected, Ford was highly critical of the other main parties, especially over the teaching colleges dispute. The Executive’s decision on that issue would “artificially inflate the number of teachers we train while simultaneously announcing 500 job losses for teachers.” Opposition to welfare reform, he claimed, was more about votes than protecting vulnerable people as it would result in cuts to other public services.

He also saw opportunities to move Northern Ireland forward such as the Corporation Tax Bill and the Stormont House Agreement’s blueprint for resolving the legacy of the Troubles.

A “total government approach” was needed to grow the economy by making government more efficient and reducing the ‘chill factor’ for investors caused by public disorder.

“History has left us a legacy of a society with two groups of people with two diametrically opposed views on a whole range of issues,” he remarked. “They have maintained those differences for a century, while these islands, Europe, the world have changed beyond recognition. But to suggest that every person in Northern Ireland falls into one of two camps is simply nonsense.” Alliance offered a vision that the region “not just deserves but desperately needs.”

Naomi Long outlined her achievements at Westminster, including an end to double-jobbing and increased transparency for political donations.

On welfare reform, she “voted against the cuts where it matters” but accepted that the Executive needed to proceed with implementing the final policy. Long was keen to point out, for investors, that political stability was “absolutely critical when it comes to decisions to locate their business and invest their money and time here.” 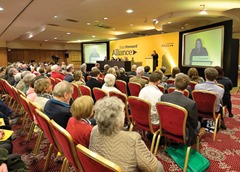 East Belfast naturally featured strongly in her speech. The European Group Travel Awards had recently recognised Titanic Belfast as Europe’s best visitor attraction. “Its success,” she commented, “shows that Northern Ireland is still capable of being world-beating when we have the vision, the ambition, the creativity and the imagination to conceive of truly inspiring and grand projects and, crucially, the courage and determination to actually deliver on that promise.”

The Yardmen sculpture on the Newtownards Road also carried a small but significant message: a replica of the Titanic hidden on each of the figures. “To me, this speaks of the greater truth of the Titanic story,” she reflected. “That there was a little bit of that world-beating greatness in everyone who worked on that ship. And I believe that there is a bit of that same greatness and aspiration in each of the people I represent in East Belfast today.

This was the 45th Alliance Party conference and it also marked the departure of several older representatives from elected office. Máire Hendron, its outgoing leader on Belfast City Council, received warm applause from the floor. Her husband, Jim, launched a history of the party – ‘History and Hope’ – written by veteran party activist Brian Eggins. The conference featured four panel sessions – on the economy, local government, protecting the environment and taking Northern Ireland “forward not back”.

At the latter event, Queen’s Film Theatre’s Susan Picken rebutted the idea that cultural funding is an add-on for society, explaining that most people who benefitted from this lived in deprived areas. She recognised that public finances were tight but remarked that professionals in the arts tended to live on low incomes (around £6,000 per year from their work) and their skills made a real difference to Northern Ireland’s quality of life. Most observers noted that the party was in a confident mood and certainly well-organised for the election campaign. However, others noted that the party still need to move from a 6-7 per cent share of the vote to beyond the ‘10 per cent barrier’ which was last reached by Alliance in 1987. The results in East Belfast and across Northern Ireland in a few weeks’ time will give a good indication about whether the party’s recovery has peaked or whether there is more room for growth.