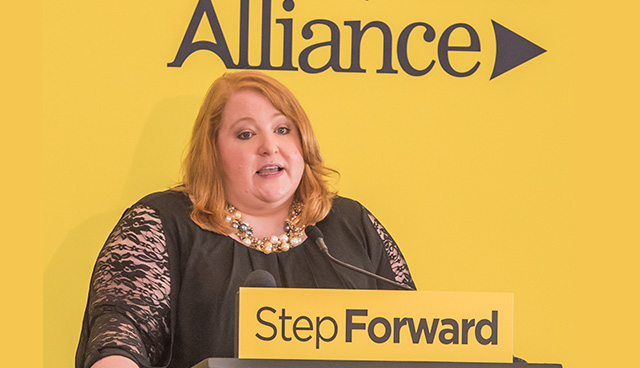 Much like the SDLP, the Alliance Party, without an Assembly to influence or a looming election to fight, struggled to inject a sense of urgency into their annual gathering of members.

You would be forgiven for thinking that the SDLP, whose conference came a fortnight after, had cherrypicked several soundbites from Alliance leader Naomi Long and deputy Leader Stephen Farry.

Similar themes included addressing the negative mood currently engulfing Northern Ireland’s politics and using the inspiration of what was achieved back in 1998 to plough a furrow towards a stable, integrated and reconciled future.

However, such is the struggle to stay relevant for those parties in Northern Ireland, unwillingly locked out of Stormont and electorally excluded from Westminster, that delivering a road map for the future around the 20th anniversary of the Good Friday Agreement was always going to invite some crossover.

Brexit and local government were the main discussion points before Stephen Farry spoke to party members. He bemoaned the impact polarising politics in Northern Ireland was having on implementing necessary change and reform.

“So as we meet Northern Ireland has: No Programme for Government, no Strategic Budget, no Economic Strategy, no

In the context of discussing Brexit, he argued that the party’s fight was not just to remain relevant but to have “meaningful and substantial influence over events”. Adding: “We need to be innovators who are shaping events, not passive participants.”

Farry’s speech was a precursor to that delivered by Alliance leader Long who opened her speech with optimism around the party’s growth in a year of political frustrations.

Pointing to “a strong campaign” for the Westminster election, a consolidation of results at Assembly level and “new members stepping forward in record numbers”, she outlined her belief that Alliance members are not only increasing but cultivating in new areas.

Discussing the way forward, Long said: “I believe it is our job in Alliance, as it always has been, to reinject hope [and possibility] back into our political discussions.”

The leader did take the opportunity to take a swipe at recent Stormont failures; raising RHI; a “conspiratorial” approach to Freedom of Information and party donations.

The Alliance Party’s route map to restoring devolution, Next Steps Forward, was published prior to the conference and calls on transitional Assembly arrangements and Westminster to legislate for “key devolved matters” such as the Irish language and equal marriage, while also addressing the reserved matters of petition of concern and around legacy.

“We will not simply stand on the side-lines, wringing our hands, or worse, add to the problems by pointing the finger. Even if we are at times slipping notes under a locked door… we remain absolutely determined to play a positive role in getting devolution restored,” said Long.

She summed up the tone of her speech and the attitude of Alliance in saying: “We have two choices to make – do we stand still, squander progress or step forward together and build a more just future in which everyone has a stake? Alliance is ready to take those next steps forward, the challenge is now to others to step forward with us.”