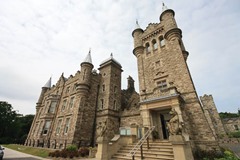 agendaNi examines how a smaller number of departments will change the workings of government at Stormont.

The number of Northern Ireland Executive departments will fall from 12 to nine following next May’s Assembly election. The changes, announced by First Minister Peter Robinson, will be outlined in a Departments Bill to be brought forward after the Easter recess. This will be followed by a Transfer of Functions Order.

Four transfers of functions have taken place since the restoration of devolution. The most significant was the transfer of the Ordnance Survey from the Department of Culture, Arts and Leisure to the Department of Finance and Personnel (DFP) in 2008.

“We tried where possible – for most of the departments, it was possible – to get some generic title that would cover the range of functions that they will hold,” Robinson said. The exception was the Department of Agriculture, Environment and Rural Affairs “because it is very hard to get a generic term that will cover each of those sometimes diverse functions.”

The future status of junior ministers has not yet been finalised. It is likely that they will remain as the posts exist in all other neighbouring administrations. Junior ministerial positions are allocated by the First Minister and deputy First Minister and have always been placed within OFMDFM. Robinson, though, commented that other departments may have a “greater call” for such a Minister as they will have larger workloads.

Several MLAs indicated that the changes would bring savings but no specific figure was highlighted in the statement. The majority of savings will be made through the voluntary exit scheme which will reduce the size of the overall Civil Service over the next five years. The real value is likely to be in a reduced ‘silo mentality’ and clearer branding for departments.

The statement is long overdue as the Programme for Government pledged that the structures of government would be agreed in 2012 and take effect at the Assembly election originally planned for May 2015. The poll was subsequently moved from 2015 to 2016 following a request by the DUP, Sinn Féin and Alliance Party.

While the changes were negotiated at Stormont, they reflect some of the current structures in Westminster. The grouping of housing, local government and regeneration reflects the remit of the UK Department for Communities and Local Government. Likewise, the single economy department mirrors Westminster’s Department for Business, Innovation and Skills. One anomaly is the Department of Finance having responsibility for civil law (as already happens with DFP). The justice departments in both London and Dublin cover all aspects of civil and criminal law, and the Alliance Party wants to see this approach taken at Stormont as well.

Family justice was separated from criminal justice under direct rule and a political consensus on joining up the two functions has not been reached. It would extend the remit of the Justice Minister into areas such as marriage and defamation law, where the DUP is keen to ensure that the status quo remains.

Department for the Economy

The other devolved administrations have abandoned the concept of departments entirely and instead have six sub-divisions within a single organisation.

Stormont’s new departments will mainly manage existing responsibilities. The only potential new power on the table is the variation of corporation tax (April 2017) while parading may also be transferred in future. The Scottish and Welsh administrations will, meanwhile, assume a range of new powers.