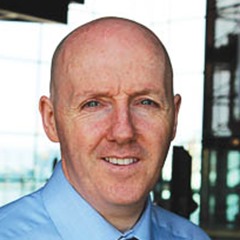 Alex McGreevy, Media Relations Executive at Titanic Belfast, takes stock of his time in PR and journalism to date.

Oddly enough, some of my mentors would be people not necessarily associated with the media – a former English teacher at La Salle who told me I had a talent for writing, and Kathy Samsel, the mother of a sponsor family who gave me a seven-week experience in the US in 1985. I told her back then I wanted to be a journalist and she told me not to let anything or anyone stop me from achieving that aim. In the profession, I would heap praise on former Irish News photographer Brendan Murphy who took me under his wing, as did Stephen O’Reilly in the same paper – he was a pleasure to work for on the sports desk.

I began contributing copy to the Andersonstown News circa 1990 for a period before earning a first payment agreement – approximately £50 per month (I kid you not). I was taken in by the Irish News and, after three memorable years there, was recruited by the Daily Mirror. I progressed to become the Irish sports editor of the Sunday People. It was abruptly shut down by London in 2004, starting for me a period of freelance work for the News Letter and Belfast Telegraph as a reporter/sub-editor. Coinciding with this period, I began forging a career in PR and talent management. I was operating as a media and sponsorship consultant when the opportunity to work with Titanic Belfast arose.

What gives the greatest satisfaction in your job?

At Titanic Belfast, no two days are the same. That’s what drew me to media work in the first place. Every day and every event presents its challenges and there’s nothing more satisfying than being entrusted to take on those challenges.

And what about the main challenges?

The main challenge in what I do at Titanic Belfast (managing its PR, media relations and social media) is that there are simply not enough hours in the day.

What advice would you offer someone wishing to follow a career in PR?

How has your profession changed since you started?

Newspapers are produced differently these days and the ‘old’ journalist must now be multi-skilled in various disciplines. The changes in journalism appear to have benefited PR, because creative, engaging content in communications is vital – so it’s an ideal progression in media.

What lessons have you learned along the way?

Media, especially journalism, could be likened to élite cycling. You have your competitors and your rivals but you should always respect them and be courteous, because the majority, if not all in the profession, got into it for the love of it, and certainly not the money. I think (I hope) that the relations I built in journalism for more than 20 years have put me in good stead in the PR world.

Restaurant: A sentimental attachment to Beatrice Kennedy’s in Belfast