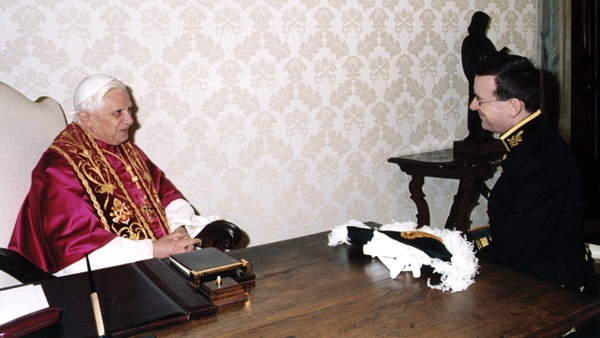 Francis Campbell has been the UK’s Ambassador to the Holy See since 2005 and is the first Catholic to hold the position since the Reformation. Emma Blee speaks to him about the papal visit and his career so far.

A native of South Down, Francis Campbell has certainly had an interesting life to date. His early diplomatic career focused on Europe, before working at 10 Downing Street, first as policy adviser and then private secretary to Tony Blair. From 2003 to 2005 he was first secretary at the British Embassy in Rome and also spent time on sabbatical as a senior policy director with Amnesty International in London.

Before Campbell’s appointment to the Holy See, ambassadors in general were chosen from the ranks of the diplomatic service and the position was normally given to a veteran diplomat in the twilight of their career. However, that changed in 2005 when Campbell, then just 35, was appointed after applying for the post through a job advert in the Guardian newspaper.

Campbell says his life so far has been “a strange journey” but it has been fascinating.

“I started out and there were two great

loves in my life: one was politics and one was religion,” he comments. “I started out wanting to be a priest and I studied for three and a half years as a seminarian. I went in straight from school and I did it concurrently with my university studies but at a certain stage I just decided I wanted to take some distance, and I did. I just didn’t think it would last 18 years.”

While he didn’t intend to take this direction he sees “a common theme” of politics and religion running through his career. He describes his time at Downing Street as “four very enjoyable years” and a place where he saw everything coming through the front door.

Asked what qualities an individual needs to take on the job of a British Ambassador, Campbell explains: “I would say one quality for anyone in a diplomatic function is that you have to have an interest abroad, you must want to live abroad, you must enjoy difference and you must enjoy people.” He thinks that managing differences and building relations are the most important parts of the job.

Another interesting turning point in Campbell’s career was when he was offered the opportunity to study a PhD and go down the academic route, but he says he is glad he chose the practical: “I like diplomacy and I like front-facing diplomacy. I like being out on the field.” 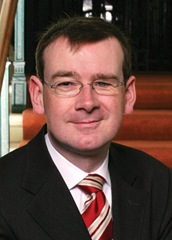 While he “likes ideas”, Campbell would rather see how they work in practice. He does have an interest in political science, his main subject during his studies at Queen’s, but says there are problems in that “the textbook tells you one version but doesn’t deal with the variables”. Reality, he argues, is much more fluid and complex.

Campbell comments that while the job is rewarding it can also be challenging: “Your duty as a UK Ambassador in any post is to explain the position of your government to your hosts and to explain the reciprocal opinion. In explaining the position of your hosts back to your own state, you say where they are coming from, why they believe what they believe and you then give advice to ministers and senior officials about a road map to take the relationship forward.”

One of the highlights of his career was when he accompanied the Pope on his UK visit in September. The diplomat recalls: “It was a very difficult lead-in because of some criticisms based on perhaps legitimate areas that people wanted to question but perhaps also some over the top, or form of intolerance, in some quarters.” However, he does think the visit went as well as it possibly could.

“We had a situation where the Pope saw over half a million people in British society, where there were major state events, major pastoral events and there was a real strengthening of the relationship,” he comments.

During the visit he described it as one of “Westminster’s worst kept secrets”. He says that it was a mistake to assume “that some of the loudest voices represented those of the wider society”. Campbell claims that some of the descriptions voiced about the Pope and the Catholic Church are the view of a minority.

Campbell is due to complete his post at the end of January and will then travel to Pakistan in April to take on the post of Deputy High Commissioner; ambassadors between Commonwealth countries take on this title. While he is looking forward to the move in a professional capacity, he thinks it may be difficult on a personal level.

“Personally you are leaving people behind that you have become friendly with, a place that you have come to settle in and know. So, of course, there’s always that little personal remorse that you have to look into a space and start all over again,” he remarks.

Campbell says his busy work schedule means that he appreciates his visits home: “I get the greatest degree of solace from friendship, those from back home and keeping in touch with people from nearly every stage of my life. I put a premium on that. You have to invest in friendship because that is the thing that supports you.”