Managing Director of SONI, Jo Aston, outlines her vision for a decarbonised power system for the next generation.

Twelve months ago SONI, the Electricity System Operator for Northern Ireland, unveiled its new 2020-25 corporate strategy, along with its new purpose to “Transform the power system for future generations”.

“Our strategy is shaped by two factors; combatting climate change and the impending transformation of the electricity sector. One relies on the other and the outcomes of both will shape the lives of our children and grandchildren. This is why it is so important for us to get it right,” explains Aston, who has brought her passion for decarbonisation into the organisation since taking up her role as Managing Director in 2019.

“It was a natural step to align the organisation with proactively shaping the future for those who will follow us. The context of climate change is well understood and the question now is how fast society can respond to limit the damage,” says Aston.

“Let’s face it, news in relation to climate breakdown is stark, August saw what scientists believe was the warmest day on earth at 54.4°C in California; melting Siberian permafrost and widespread flooding in Great Britain. However, at SONI, as a progressive electricity system operator we are embracing optimism and action as a response and are committed to ensuring Northern Ireland plays its part in arresting the accelerating emergency.”

“It’s worth noting that several European economies are questioning if 2050 is too far out to effect urgent change and are reviewing climate policies with 2040 in mind. Given this movement, Northern Ireland cannot afford to be sitting on the periphery and out of step; the journey is already upon us, with a new world ahead.

“Due to our role, SONI is uniquely placed to navigate the whole system change which is beginning to happen,” she explains.

“Realising these opportunities will require a significant transformation of the electricity system. More importantly, these changes will need to be managed in a co-ordinated and cost-effective way. SONI has a key part to play, along with the Department for the Economy, Utility Regulator and NIE Networks, in ensuring that we have a clean power system for the future.”

SONI’s ‘Tomorrow’s Energy Scenarios 2020’, published this summer, evidences the organisation’s in-depth holistic perspective. The report, made in collaboration with a range of stakeholders, is a detailed consideration of three credible scenarios that Northern Ireland’s power system could take in relation to net zero carbon goals.

“Do we aim for modest progress?” asks Aston, “where in 2030, 60 per cent of our electricity is from renewables; diesel and petrol cars are banned in 2040; and we reach an 80 per cent reduction in carbon emissions by 2050, or do we set our sights on a more accelerated approach where Northern Ireland achieves its net zero contribution by 2050?

“Here we see a ban on new petrol and diesel cars by 2035, the rapid uptake of electric vehicles, progress on the electrification of heat and 70 per cent of electricity from renewables by 2030. At SONI it isn’t our role to set the target or choose the route, but to ensure the power system is ready to implement the policy decisions being formulated by the DfE.”

The Managing Director says real progress has already been made in relation to the power system’s response to the climate crisis: “The recent Capacity Auction for the wholesale electricity market has yielded a very positive outcome, with the end of coal in Northern Ireland’s fuel mix by autumn 2023. In addition, our work has been critical to Northern Ireland meeting its Strategic Energy Framework target of 40 per cent of electricity generated from renewable sources a year in advance of the 2020 timeline. At the moment, we can run the system on 65 per cent electricity from renewables at any one time, which is world leading. However, we need to get this to 95 per cent or greater if we are to reach any ambitious target set by the DfE in its future energy strategy.

A path to success

Aston believes Northern Ireland’s ambitions for net zero can happen, but only if all the necessary elements are in place: “In partnership with NIE Networks, we are working closely with the DfE as they develop the future Energy Strategy for Northern Ireland. This collaborative approach is crucial given the interaction between the power, heating and transport sectors.

“At SONI we will continue our collaboration and partnerships across industry, academia, consumer bodies and environmental organisations so that together, we can innovate to find solutions to expedite the response to the climate crisis. This is particularly important, as technologies continue to develop, such as battery storage; power to gas; hydrogen from water with the utilisation of renewable energy which has to be dispatched down for system security reasons.” 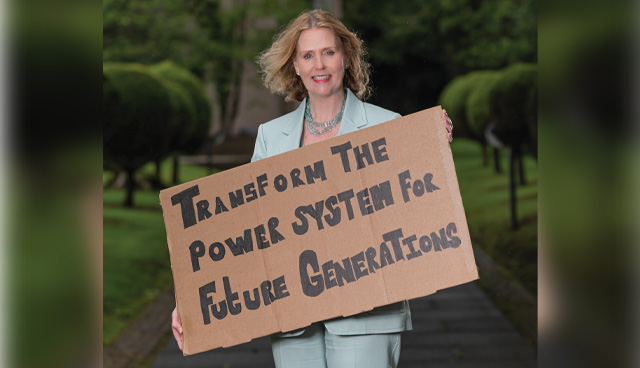 Explaining the critical need for investment in the electricity grid and supporting the communities who will host the infrastructure, Aston states: “Investment in the electricity grid in the order of circa £500 million will be required over the next decade in order to attract and connect adequate renewable generation into the Northern Ireland market. This investment will not only provide a route to market for low or zero carbon technology and opportunities for the green collar sector but will also benefit the construction sector at a most challenging time. The green recovery is a key pillar of Stormont’s plan to revive the local economy and grid infrastructure is a key part of that.

“The strategic infrastructure required to facilitate this low or zero carbon technology in Northern Ireland must also be realised in a timely manner. Planning decisions must also involve and support communities. I believe that a mechanism to support those communities who host grid infrastructure is an important part of any just and equitable transition.”

The North South Interconnector remains an outstanding necessity to enable SONI to significantly increase the amount of clean energy on the grid. The project, which is awaiting a planning decision, will provide an additional 900 MW of renewable energy onto the island’s network; enough to power 600,000 homes. It will also provide long-term security of supply in both jurisdictions and, crucially, will remove constraints that are costly for consumers.

“The North South Interconnector will be a game changer in improving the efficiency of the Single Electricity Market by allowing maximum use of energy from wind and other renewables. In doing so it will also reduce costs to consumers across the island of approximately £20 million annually, rising to £40 million in savings by 2030,” explains Aston.

It is not only the investment in and realisation of grid infrastructure and just transition mechanisms that the Managing Director believes are required. As the Utility Regulator and SONI move through the Price Control Process for 2020-25, Aston says her organisation requires the funding necessary to drive and co-ordinate the whole system change required in the power sector.

“We need now, more than ever, to innovate and collaborate across a complex market in order to optimise solutions; we need the scope to fully explore Northern Ireland’s offshore wind potential and we need to inform the debate with accessible data platforms and engagement programmes to reach the hearts and minds of the consumers of today and tomorrow. The realisation and drive to address climate change is essential to protect our planet for future generations.”

The power system and the future generation

Anna Kernahan is a Belfast-based youth climate activist who is the founder of Fridays for Future Belfast. The activist recently visited SONI to meet Aston and understand the role of the electricity system operator and its role in arresting climate change. 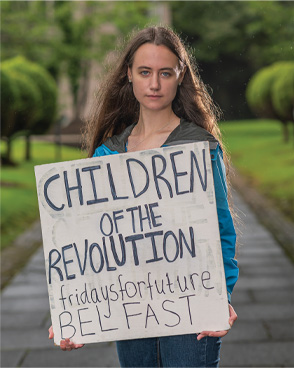 “In my lifetime by 2050, unless we all make a real and lasting difference, Belfast City Centre will be underwater, I will be 48 and most lands around the equator will be desert. In the global south this is already happening,” outlines Kernahan.

“People are starting to wake up, but not quickly enough; education is so important and it is organisations like SONI with voices, influence and data that we need to hear more from. We all need to work together to channel our motivation. No time is soon enough.

“World leading amounts of renewable electricity on the grid here are going to make a difference, but I hadn’t heard of SONI or understood the work they do until today, and I’m a climate activist.

“SONI is doing well, but we need this in every sector. What SONI wants to do is ambitious and we need that and more; the move to renewable energy is a system change, we should be aiming for 100 per cent of electricity from renewables and as soon as possible. It is the responsibility of business, government and organisations like SONI to drive the systematic change needed. The severity and urgency of the climate crisis is not optional.”

Jo Aston is Managing Director of SONI, the Electricity System Operator for Northern Ireland. Jo also sits on the SONI Board of Directors.

Jo joined SONI in 2019, coming from the Utility Regulator for Northern Ireland, where she served as Director of Wholesale Energy Regulation.