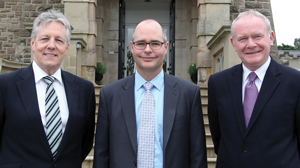 In his first print interview, US Consul-General Greg Burton shares his positive first impressions of the province with Peter Cheney and talks about his hopes for stronger business links between the United States and Northern Ireland.

America has an “abiding friendship” with Northern Ireland, Greg Burton maintains as he reflects on his brief time in post to date.  A softly-spoken economist, Burton was appointed as the new US Consul-General on 28 June and has been impressed by the “very warm” people he has met so far.

He recognises that “a great deal of work has been going on to continue to support the peace process and to further the gains that have been made already.”
“I’m very encouraged to be here, very excited and I’m looking forward to learning more,” Burton remarks.  While he has not previously visited Northern Ireland, he did tour the rest of the British Isles on holiday with his wife last summer.

The USA’s priorities “since the peace” have been to support the Executive and the political process, the social process (i.e. better community relations) and the economy.
“I think that we’re in a period of consolidation of the peace process here,” he says, “and from the conversations I’ve had, both with political leaders and others here in Northern Ireland since I arrived, it’s very clear to me that there is work that remains to be done to consolidate the gains and move further, and we look forward to supporting that.”

The Obama Administration has no plans to appoint a successor to Economic Envoy Declan Kelly but local business leaders will be pleased with Burton’s background as an economic officer in the US Foreign Service. Over the last ten years, over £300 million of US inward investment generated at least 7,400 jobs.

“Certainly, we feel that the economic relationship can continue to grow and certainly trade and investment are very strong between the United States and Northern Ireland,” he states.

Burton helped to deliver the free trade agreement between the US and South Korea and has worked on environmental policy, science and international development, with the latter involving two tours in Afghanistan.  His career has also taken him to Denmark, Serbia and Venezuela.

While in Afghanistan, he worked on developing an economic and development strategy for the country, which was outlined at the Bonn conference in December 2011.
Last autumn, non-European diplomats in Brussels were concerned that the continent was becoming more inward-looking (agendaNi issue 50, page 116) as the euro zone crisis continued.  The Asia-Pacific region, in contrast, was growing and appeared to be overtaking Europe.

World Bank statistics indicate that the US and EU together held 46.7 per cent of global GDP last year, down from 53 per cent in 2008.  Over the same period, the East Asia and Pacific area’s share grew from 22.3 per cent to 26.8 per cent.

Burton notes the “huge partnership” between the European and US economies, with each side being the other’s largest investor and trading partner, and also the “very important political relationship” across the Atlantic.

“I’ve just come from a year in Afghanistan,” he adds, “and I can tell you that there are other important partners in Afghanistan but none more important than our European partners, in terms of our work in ISAF [International Security Assistance Force] and our joint work with the Afghan Government to try and make progress both on the political side [and] economic side.”

It is put to him, though, that the world is at a crossing point with economic power moving towards East Asia, regardless of the US-European relationship. The region’s faster growth  is “probably not so surprising given that we’re much more mature economies and don’t have the untapped resources” available in the Far East or, in some cases, South Asia.

Europe and the USA are adjusting to those changes “but I don’t think it changes the importance of the US-Europe relationship.” His predecessor, Kamala Lakhdhir, is now Chief of Staff to the State Department’s Under Secretary of State for Political Affairs, Wendy Sherman.

Every diplomatic mission covers a wide variety of work, from helping tourists in trouble to high level political negotiations.  He does find that “every day seems to be different” as he settles into the job.

At the time of interview, he had visited Craigavon pharmaceutical firm Almac (an investor in his home state of Pennsylvania), met the First Minister and deputy First Minister, and hosted American students from the Fulbright-Queen’s University International Summer School.

While not an instant expert, he is keen to work with political and economic leaders and others “to learn about Northern Ireland and to try to make sure that we’re contributing and helping my government see where we can contribute.”


Born and raised in the Philadelphia area, Greg graduated from Dickinson College in Carlisle, Pennsylvania, with a BA in international studies and Spanish, and later received an MA in economics from New York’s Fordham University.

Before his diplomatic career, he was a US Army officer for four years, mostly as a strategic and operational planner at the 7th Special Forces Group’s headquarters; he attained the rank of captain.  Greg and his wife Nana Lee Felding enjoy biking, hiking, running and generally spending time outdoors, including taking long walks with their six-year old border collie, Sam.