With the Stormont Executive’s immediate future now secure, agendaNi takes a look at the deal that some politicians claim offers Northern Ireland a fresh start.

After 10 weeks of discussion, the new deal agreed between the DUP, Sinn Féin and the British and Irish governments, optimistically titled “A Fresh Start,” has been announced. The deal means that the Stormont Executive remains intact, at least for now. Failure to reach this compromise could have resulted in direct rule from Westminster, a move that few in Northern Ireland believe would be beneficial but just what does this deal actually deliver?

Perhaps regarded as the straw that broke the camel’s back, the revelation last August that some of the Provisional IRA structure from the 1990s still exists brought the Ulster Unionist Party’s resignation from the Executive and led to the DUP’s ‘in out’ ministerial policy. This policy made a deal a necessity if the Executive was to continue to function.

However, going into the talks, the DUP were adamant that for an agreement to be reached the independent monitoring commission would need to be re-established. Instead, an international body will be set up to monitor paramilitary activity, with appointees nominated by the British and Irish governments and the Northern Ireland Executive, not quite what the DUP had hoped for.

The new international body will have a budget of £3.2 million. However, unlike the old paramilitary monitoring body, it will not have the power to recommend the exclusion of any parties from the assembly.

For their part, the DUP and Sinn Féin have agreed to new principles that expect politicians to work towards the disbandment of paramilitary structures. Politicians have also agreed not to take instruction from anywhere other than those who have given them their democratic mandate. These principles apply to all MLAs, not just those who hold ministerial positions. 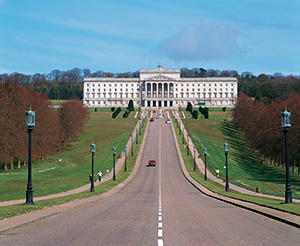 An extra £500 million has been pledged by the UK Government in this deal but just how does it add up? A total of £188 million will be made available for security-related spending. The PSNI will get an unconditional £160 million over the next five years and a further £25 million will be released if the Executive comes up with matched funding from its own resources.

Cross-community issues will benefit from an additional £60 million over five years with some of this money going towards the removal of Belfast’s ‘peace walls.’ There will also be £125 million for the Social Security Agency to tackle fraud and error. It is believed that this extra money should allow the agency to detect up to £300 million of additional fraud over the next five years with Stormont allowed to keep half of that money, however, without this assumed £150 million the £500 million total will not be met.

This deal will also see a reduction in corporation tax, but a year later than had been hoped. Corporation tax, a tax levied on companies’ profits will fall to 12.5 per cent, the same level as that of the Republic of Ireland, in April 2018.

Before and during the talks one of Sinn Féin’s major policies was that Tory welfare cuts would not be imposed on the people of Northern Ireland. However, a legislative motion agreed upon in the assembly, after the deal had been agreed handed the power to decide this back to Westminster.

The last Stormont deal included a mitigation package on welfare reform that amounted to £564 million over a six-year period. The new deal includes a four-year programme, with a value of £585 million. This money will be split. £345 million will go towards mitigating the welfare changes while the remaining £240 million, that was supposed to help those struggling with the now cancelled tax credit change, will be repurposed.

An independent benefit expert has been asked to ensure that £30 million a year is devoted to assist people affected by the bedroom tax and there is hope among some at Stormont that the deal will allow them to recoup around £40 million of fines linked to welfare that would have gone to the Treasury.

Despite being welcomed by a host of big names including Prime Minister David Cameron and Taoiseach Edna Kenny, the agreement has been roundly criticised from politicians in Northern Ireland outside the ‘big two’ parties.

SDLP leader Colum Eastwood claimed that originally all parties had agreed to sit round the table and come up with a deal, however, he said that this deal, agreed by the DUP and Sinn Féin is flawed and is critical of the fact his MLAs were being asked to sign up in support of it without being given appropriate time to evaluate it in depth.

“We all signed up to a process where we would have all the parties around a table, trying to come up with a comprehensive deal, and then two parties went off and did their own deal,” he said. “The absence of comprehensive proposals on the past is a very serious failure. Those who persist in impeding truth and accountability cannot prevail.”

The Alliance Party’s David Ford was also critical of the deal labelling it a “half-baked plan” that proved to be little more than a false dawn for victims of the past and categorically not what either side had promised the deal would be.