Following the controversial decision by the House of Lords to delay Chancellor George Osborne’s controversial tax credit cuts, Adam Morton takes a look at the constitutional crisis brewing at Westminster.

Last October, Chancellor George Osborne looked set to press ahead with his controversial tax credit reform plans. These proposals, the Institute for Fiscal Studies (IFS) argues, would have left millions of working people around £1,000 a year worse off but would, the Treasury claims, have saved the government £4.5 billion a year from 2016.

Under Osborne’s proposals, which he backed down from, from 2016 the income threshold for working tax credits would be cut to £3,850 a year, while the child tax credit threshold will be cut to £12,125. In July, the bill which included this change, passed through the House of Commons with 308 votes to 124. The bill made its way to the Lords in late October, where three motions were tabled following debate in the chamber.

Baroness Manzoor’s motion calling for a straight block on tax credit changes was defeated by the Lords with 310 votes against and 99 votes for. However, a crossbench motion tabled by Lady Meacher calling for the government to pause and respond to the IFS criticism as well as consider possible mitigating action was supported by the majority of her peers as the motion passed with a majority of 307 to 277. Similarly a Labour motion calling for the proposed changes to tax credits to be blocked for three years and a consultation process to begin gained the support of the house with 289 voting for it and 272 voting against it.

This was presented as a big blow to the government and according to Gainsborugh’s Conservative MP Edward Leigh is the first time in 100 years that the House of Lords has defied the elected House of Commons over a financial matter. A short time after this defeat, Downing Street outlined plans for a rapid review that will “examine ways to guarantee the House of Commons always has supremacy on financial matters.”

This decision by the House of Lords has drawn parallels with the constitutional crisis of 1909-1911. In 1909 the People’s Budget introduced unprecedented taxes on the wealthy and radical social welfare policies. This budget unsurprisingly was not welcomed by many of the aristocracy filling the House of Lords. The Upper House was entitled by convention to reject, but not amend a money bill. Prior to this point it had not rejected a budget In 200 years, yet on the 30th November 1909 they did just that.

This rejection and another a year later played a large part in the introduction of the Parliament Act 1911. The Act effectively removed the right of the House of Lords to veto money bills completely and replaced their ability to veto bills with the ability to delay them for a period of two years. This was again amended in 1949 to reduce the ability to delay bills for just one year. 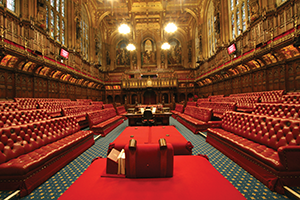 Citing the infringement of this act the review of the role of the House of Lords which will be carried out by the former leader of the Lords, Lord Strathclyde, will seek to find ways to ensure that financial measures cannot be overturned by the House of Lords. However, Labour has argued that there was no such infringement as the Lords voted to delay a statutory instrument that had not been declared as a formal financial measure. The review will also look at ways of guaranteeing that statutory instruments cannot be overturned by the Lords.

However, suggestions that the Prime Minister will stack the Lords with up to 100 new Conservative peers are likely to prove unfounded as Cameron is known to be wary of the negative PR this move could create. Reflecting on the standoff that has now developed between the House of Lords and the House of Commons, the Professor of Politics at the New College of the Humanities claimed the situation created a constitutional difficulty as in this instance the Lords has positioned itself as an “opposition chamber, rather than as a revising chamber” and claimed that any government would find this position unacceptable.

The former leader of the Conservative Party, William Hague has accused the Lords of forgetting a “key principle of this liberal civilisation.” Believing that it would not be wise to flood the House of Lords with a large number of Conservative peers, Hague believes a simple amendment to the Parliament Act will prevent a situation like this from ever happening again.

He claims that the current situation has left the Conservative Government with little choice but to introduce an amendment to the Parliament Act 1949. Hague says such an amendment could be very short, simply needing to state that the supremacy of the Commons on matter of finance is an overriding principle of law.

Whatever happens next it is clear that changes to the make-up and power of the House of Lords are now firmly at the top of the Conservative Government’s agenda.

All of Northern Ireland’s MPs who attend parliament voted against the cut to tax credits, However, The House of Lords tells a different story.