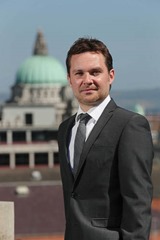 John Campbell sums up the perspective of the business community as a tentative recovery takes shape.

On 13 October 2008, I was deep in the Aitana Mountains of southern Spain. It was well out of mobile phone coverage so it wasn’t until the next day that I found out that the British banking system had almost collapsed. It was a shocking story and particularly for one of my fellow hikers who worked in recruitment for RBS.

I think that was the day which rekindled my interest in business and economics reporting. I started my career as a business reporter with the (now sadly defunct) Daily Post newspaper in Liverpool but as a producer with the BBC in Northern Ireland from the early 2000s, my focus was largely on the peace-process politics of those years.

The steady, seemingly safe economic growth of those years wasn’t necessarily a top priority for newsdesks here or elsewhere. The past five years have been much more interesting, mainly for the wrong reasons.

Over that time, I have been deeply involved in shaping the business coverage of BBC Northern Ireland as we have tried to explain how the economy has been buffeted by global events and local peculiarities.

My new role has happily coincided with a change of atmosphere which suggests that the local economy is at least stabilising and probably undergoing a tentative recovery. I have used the last few months to get out and talk to business owners, large and small, and there is certainly a growing sense of optimism though that is tempered with an understandable caution.

One of the continuing problems raised by many of those people is banking and access to finance. Many firms feel that the banking system is still not working for them and that the pendulum has swung too far from the easy money days of the last decade. They acknowledge that the banks are open for business but that the terms of that business are perhaps too onerous. Trust is an issue too.

On their part, the banks say that they want to lend more and are introducing new products but that lack of demand is the issue. The banks also have to face competing demands from regulators who want to see a safe, conservative, strongly capitalised banking sector and politicians who are hearing constant complaints from the small businesses which form the bulk of our private sector.

The appointment of an Executive-sponsored Access to Finance Implementation Panel is a potentially useful step but I’m sure disagreement on whether the problem is one of supply or demand will run and run.

When it comes to the Executive generally, there is a degree of scepticism among business leaders that the economy is really ‘the number one priority’. The Investment Conference was a bit of a morale-raiser but some people have pointed to the Haass talks which are consuming a large amount of political energy yet have only a minor or indirect economic component.

There is, however, a lot of goodwill towards the new Finance Minister, Simon Hamilton, who is seen as knowledgeable, engaged and approachable. I will be interested to see how Minister Hamilton’s big idea – public sector reform – manifests itself.

For example, he has talked to the Government Digital Service, the award-winning team responsible for completely overhauling the UK Government’s websites. That suggests a bigger role for online delivery of some services.

Minister Hamilton insists that, whatever happens, this is not an exercise which is aimed at finding job cuts but if the aim is creating a more efficient government bureaucracy, will it require the same number of people doing the same sorts of things? And this all comes against a backdrop of public finances which will remain tight well beyond the next general election.