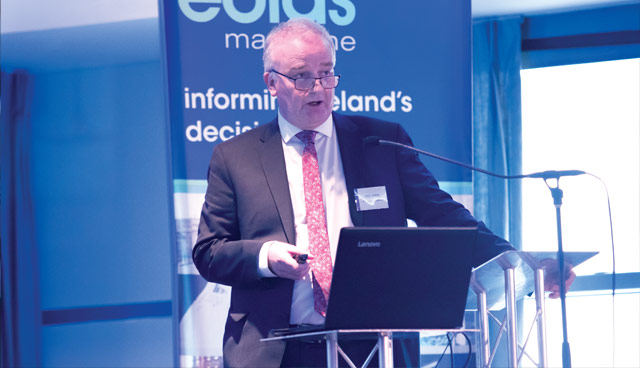 Paul Burns, Head of ICT at the Courts Service of Ireland reflects on the small, yet significant measures spearheading digital transformation in criminal justice.

“The taking of photographs in Irish court proceedings is strictly forbidden. So, I have gone all the way back to 1916 to find this painting by Sir John Lavery, which portrays the trial of Roger Casement in London’s Court of Appeal,” he says, drawing attention to the image which depicts a scene bustling with wigged barristers and stacked paperwork. “The Law Gazette recently published an article which claimed that any lawyer from the modern day would feel perfectly at home in this painting,” adds Burns, suggesting that the legal system has retained many of its traditional and time-honoured customs.

“Things have changed to some degree. You rarely see judges wearing the grand white wigs, although barristers are still known to wear them. The most significant changes to the system have been in favour of the defendant: the death penalty has been abolished, along with other archaic punishments,” notes Burns. “As for the paper strewn across the benches, we still see that every day. With the cheapening of paper and photocopying over recent decades, we see more and more paper in the courts,” he continues. “So, this is what a courtroom looks like, and this is what we, as an organisation, deal with.”

Whilst wigs, robes and papers still feature heavily in the courts, the system has witnessed many changes. Indeed, Burns suggests that the most prominent change is represented in the sheer scale of the workload carried out by the Courts Service, drawing attention to the roles played by the District, Supreme, Surrogate and High Courts. “The Court of Appeal is, of course, a recent introduction which came following a successful referendum,” explains Burns. “To give a rough idea of what we do: we have around 160 judges, dealing with over 228,000 cases, with 56-57,000 of those cases involving family law matters. Over 420,000 criminal cases come through the courts each year, with over half of those being road traffic offences”. As Burns suggests, the scale of the Courts Service of Ireland’s workload is extensive.

Such an operation requires an extensive framework of staff, venues and services. “As an organisation, the court service is spread right across the country, with offices and venues in every county. We have 1,025 staff servicing the 160 judges across these offices. There are the famous Forecourts, built in 1796,” he notes, drawing attention to the historical significance of these institutions. “There is also the Green Street Courthouse, which was built around the same time and has hosted several historic trials, including that of Robert Emmet. That court is still used every week,” he says, adding that “the recently-opened Criminal Courts of Justice are some of the most modern court complexes currently seen in Europe”.

The technology of the Courts

Whilst Burns acknowledges that the Courts Service is a traditional and often conservative institution, he suggests that the system is modernising, with a progressive Chief Justice who is keen to embrace the possibilities of technology. “We have video evidence display and video conferencing in many courtrooms. We have digital audio recording of every case, which can only be accessed with the permission of the judge concerned. The production of transcripts can be done remotely with our sophisticated system,” explains Burns. “In relation to video conferencing, it is used extensively with the prison services, who have video booths in several their prisons where a prisoner can appear via video link,” he continues. “With the technology, you could run a virtual trial with only the judge present and all the parties in other locations. That hasn’t been required, and nobody has sought to do it, but the technology is there.”

“With the technology, you could run a virtual trial with only the judge present and all the parties in other locations. That hasn’t been required, and nobody has sought to do it, but the technology is there.”

The use of video technology has been pivotal to the digital transformation of the Courts, according to Burns. Video evidence display is becoming prominent in modern criminal justice, with fraud trials particularly benefiting from the feature. “We have used video evidence display to show complex documents in cases which sometimes went on for months. We understand that the trial saved vast amounts of time since documents weren’t constantly being passed across the benches, which happened previously”. However, the offering of video technology isn’t limited to fraud cases: various practitioners can use it to display pieces of evidence. “Again, the use of these technologies is steadily increasing over time,” he notes. Video technology can be found in courts across Ireland, from Drogheda, Letterkenny and Wexford to Limerick, Waterford and Mullingar.

The digital offering currently presented to the connected citizen is small, yet growing, admits Burns. Online fine payment systems have represented a basic, yet important milestone for the Courts Service, as have several functions built into its website, including a legal diary and an extensive verdict and case information search capability. “The court’s website is used heavily, with three million visits per year. Around one million of our visits come from mobile devices, which is notable given that our website hasn’t been designed for mobile use. The current website is quite dated, and there is a project going on at the minute to revitalise it,” he remarks.

The digital transformation of the judicial system brings with it particular benefits in regard to interacting and engaging with other public bodies. “The verdicts of cases are digitised and sent to the Gardaí, and there are around two million messages of this nature sent every year. This system introduced significant changes on Gardaí time, entering cases and delivering documents,” explains Burns. “We also have interactions with the Revenue Commissioners, and in the insolvency area, our interaction is completely electronic. Information from them comes to us, which is then displayed electronically.”

“In the next week we will be publishing our first online bankruptcy register – it’s not huge, but it is a significant step. It will contain all bankruptcies back until 1922, so I’m sure that will generate a lot of interest,” highlights Burns. “The DoJ are sponsoring a project called the Criminal Justice Hub which will involve ourselves, the Gardaí and the Probation Service having access to data and case outcomes, and where appropriate, details of people involved in those cases,” he adds. “In the case of courts documentation, we are very anxious to move toward electronic filing and electronic availability to judges. The Supreme Court case will be the first instance where we trial this.”

Why do the Courts offer the public such a limited digital contribution? According to Burns, it can be largely explained by a combination of legacy systems and conservative attitudes. “We have been upholding old legacy systems across all 43 offices, which all have slightly customised systems which don’t easily interact with each other and will have to be replaced. We work in a conservative environment, with judges who don’t like to change. There are some who are very onboard, and there are others who are more tied in to more traditional methods. We have complex processes for managing court business, and many of those are concreted in legislation and court rules, making it difficult to make those changes.

“The big issue for us all is resources, both in ICT and business expertise. Whilst some talk of artificial intelligence and robotics, we have a long way to go.”