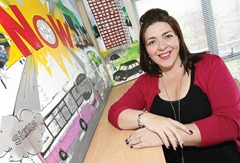 Now Chief Executive Maeve Monaghan talks to Peter Cheney about the social enterprise’s beginnings, growth plans and the difference it makes to people with a range of abilities.

From small beginnings, Belfast-based social enterprise Now has grown to become a successful business which employs 39 staff and gives 700 people a year the chance to work, train and enjoy the dignity that comes with that.

Now has been operating since 2001 and was originally set up to work with people who have severe learning disabilities. It provides an all-ability training and employment service and the last three years have seen considerable growth in its business.

For example, its Youth Service programme will help 160 young people who are not in education, training or employment across Belfast and Lisburn. The programme is a joint project with another community-based business (Stepping Stones) and is funded by the Department for Employment and Learning as part of its drive to increase the size of the workforce.

The social enterprise is “very focused” on providing a quality service to its customers. A strong governance structure is in place and managers work by setting and meeting targets.

Explaining the need for the service, Monaghan points out that parents of children with learning disabilities are often worried about what will happen to their children after they leave school. “It can be quite a traumatic time,” she remarks.

Now’s staff work with families at this stage, to discuss what they would like to see happening, including the options for accredited training. They also arrange joint meetings between health and social care staff, day centre staff and careers teachers in schools.

“We bring all those people together to work with the individual so they have a plan about what’s going to happen after they leave school,” Monaghan comments.

The company was originally based in North and West Belfast and was set up after parents felt that there was “very little there” to help them in that stage of their life as a family. A similar organisation was already operating in South and East Belfast and it was a matter of starting up that kind of service in the rest of the city.

Now has developed into a more professional organisation over time and it aims to have three other service delivery areas in Northern Ireland by 2016.

It is currently looking at Larne, Newtownabbey, Cookstown and Magherafelt.

“What we are trying to do is plug gaps in services,” she points out, “rather than going in competition with other good service providers who are already there.”

Flexibility has been an important factor in its growth: “We listen to people – our service users and the people who we work with – and sometimes we set up a little piece of work because that’s what they want to do.” 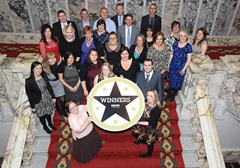 Monaghan wants to see people enjoying their work with the organisation. Kidnap Wednesday is a group of people with mixed abilities who meet in the Black Box each week and decide how they want to socialise – maybe getting a cup of tea or going out to a play. Monaghan adds: “That has grown into something that’s about user engagement and independence.”

An allotment at Roden Street in West Belfast grows vegetables which are then used in its two cafés. This branch of the organisation (Loaf Catering) is a profit-making business which has won two “quite considerable” contracts to deliver catering for Springvale Learning and outside catering for NICVA’s offices on Duncairn Gardens.

“That makes money but it also provides training and employment opportunities for people with different abilities,” she comments. Outside catering is providing the greatest growth and Now is turning it into a business that can compete with anyone else in the market.

As for overall results, Now has helped 27 people with different learning abilities to get into paid employment over the last year. One key achievement was getting six people into six jobs over six days, and it’s pleased to see a similar emphasis in the Belfast Telegraph’s ‘50 jobs in 50 days’ campaign.

Making sure that the enterprise keeps the right focus is a constant challenge.

“It’s always for us a balance between the business objectives and the social aims and making a difference,” Monaghan says. At times, Now has found itself making plenty of money but “taking our eye off the ball” in terms of supporting its people. At other times, the emphasis has been the other way around. She adds: “We have a very, very good board who work very well and the plan is to have a really balanced strategy that looks at business and the focus on income generation and stability but also focuses on impact and quality of service.”

Now produces an annual report on social impact and will “wind down what doesn’t make a difference” while scaling up projects that are making an impact. Indeed, one of its new projects (Gauge) is a community interest company and consultancy which helps companies to understand social impact.

“We do it well,” Monaghan affirms, “and we would like to see other people doing it well.”