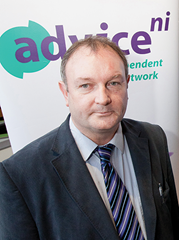 Since receiving Royal Assent at Westminster on 8 March 2012, the Welfare Reform Bill has been making its way through the Northern Ireland Assembly and has generated much debate and controversy, most notably in relation to parity issues in terms of how we can best ‘get it right’ for the unique circumstances of Northern Ireland or, put another way, what we can ‘afford to change’ and what we can’t.

Our own Minister for Social Development Nelson McCausland has achieved some concessions from Westminster such as flexibility over fortnightly benefit payments and housing costs continuing to be paid to landlords. These are to be welcomed but more will be needed. We need to think outside the box in terms of protecting the most vulnerable who will be worst affected. That is why Advice NI has called on the Assembly to introduce a clause into the Bill to place on a statutory footing the ‘right to independent advice’ for those who will be badly affected by the changes. This would have the effect of providing an additional safety net.

Welfare reform is taking place at a time of considerable upheaval in Northern Ireland. Recession, job losses, reduced working hours, rising fuel and food prices have all served to place tremendous pressure on household budgets. As a result of these pressures, demand for advice services has soared over recent years.

Advice NI, which has 69 member organisations across Northern Ireland, received 270,000 requests for help last year, up 70,000 on the figure for 2008 when the recession commenced. The bulk of these enquiries are social security-related and many are coming from people who have not previously interacted with the social security system. Debt problems have also grown significantly. Already since last August, our Debt Action NI service has helped over 3,000 clients deal with £54 million of debt, an average of £18,000 per person including mortgage debt.

These problems are likely to continue to grow and the future impact of welfare reform, when fed in the mix, will have profound implications for many citizens, not least of which will be integration into a new system of universal credit which is predicated on encouraging people into work. Unfortunately that is not something of which we have ample supply in Northern Ireland.

We are facing unprecedented changes to our social security system with many unknown consequences (including how the system itself will work). At the same time, our members are telling us that many individuals and families are living in fear and apprehension about how they can sustain themselves and be able to cope in the future.

Independent advice services will continue to play a key role in helping people navigate through these difficult times. We will continue to ensure that the most vulnerable have access to the help they need but there also needs to be a serious debate about boosting the advice sector’s capacity in order to deal with future demand.

Our politicians will begin the serious task of debating the Welfare Reform Bill in the Assembly over the next month or so. They need to do so in a manner that genuinely puts the needs of our most vulnerable people to the fore and challenges some of the more unpalatable, ideologically-driven elements of the Bill.