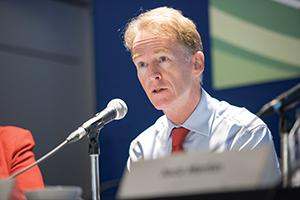 All the countries making up the UK and Ireland must learn from each other, in terms of creating sustainable development programmes that put the environment first, according to Natural Resources Wales (NRW) Chief Executive, Dr Emyr Roberts.

Speaking at the 2015 Environment Ireland conference, Dr Roberts claimed that Wales and Ireland have already developed very strong links in this regard. “We need to build on these links for the future,” he said. “This will only be achieved by developing integrated policies that make the management of our environment and the sustainable use of our natural resources a priority at all times.”

NRW was established as a standalone organisation in 2013. The new body effectively took over the functions of the Countryside Council for Wales, Forestry Commission Wales and the Environment Agency in Wales. It employs 1,900 staff across Wales with a budget of £180 million.

NRW manages 70 per cent of the land area of Wales and 35 per cent of Welsh territorial waters. According to Roberts, the Welsh government took the decision some time ago to put in place a single body with a business remit, in order to manage the country’s natural resources with a clear rationale. This also has the added benefit of ensuring that priorities for Wales receive a Welsh solution.

NRW acts as an environmental advisor to the Welsh Government, while also carrying out the roles of statutory consultee, regulator, educator, designator and evidence gatherer. Its remit makes it the primary response source to any incident that has implications for the environment in Wales.

“We seek to ensure that our advice is evidenced based, clear and consistent to help determining bodies make environmentally informed decisions, and help developers incorporate environmental considerations into the location, layout and design of their proposed schemes.”

Roberts also pointed out that Natural Resources Wales plans to deliver £150 million of benefits over the next ten years. The core focus of this investment will be ensuring the environment is protected at all times

“We work in partnership with many other agencies covering educational, and conservation enhancement,” said Roberts. “As a regulator, we deal with all the issues relating to waste management, river pollution, fly tipping and illegal netting of fish. At the same time, we designate specific sites of special environmental interest. All of this is work is underpinned by scientific research of the highest standard.”

Roberts explained that a number of key environmental challenges remain to be fully resolved in Wales. These are: water quality, declining biodiversity, climate change, environmental incidents and plant health.

“Other challenges include health issues and inequality, economic development, energy and resource efficiency,” he said. “Where water quality is concerned, we have yet to meet all the criteria laid down within the European Union’s Water Framework directive. Mitigating climate change is a challenge that confronts Wales and every other country in the world at the present time. Rising sea levels are strong evidence to the effect that global warming is a reality.

“Plant health-related issues are also giving cause for concern in Wales at the present time. The current Larch Disease outbreak in South Wales is a case in point. But we must also strive to connect all these policy matters in ways that bring together a cohesive strategy for the environment as a whole.

“It’s all about creating a circular economy, one which allows the creation of economic drivers, while at the same time being respectful of health and social needs, all wrapped up in overarching strategy that fully respects the needs of the environment and, essentially, this means putting the right developments in the right places.”

Roberts cited the example of the refurbishment plan that was put in place for the Rhondda water course as an example of how Natural Resources Wales has acted in a holistic and strategic manner. “Severe environmental degradation was a key feature of the Rhonnda valley, after many decades of coal mining,” he said.

“Very severe levels of habitat destruction have led to numerous flooding incidents, which have impacted on all of the towns and villages in the region.

“But with the full support of the local communities, we put in place an action plan which led to the softening and the slowing down of the water course in the upper reaches of the valley. This, in turn, has led to the creation of more diverse habitats, including the restoration of the peat bogs, which would have flourished in the area, prior to the establishment of the various mining operations.

Roberts then referenced the new effluent treatment plant at the First Milk creamery, near Haverford West in South Wales, as another example of 21st century planning with a uniquely environmental footprint. 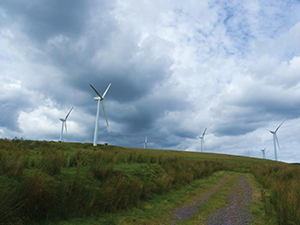 The project involved both the milk processing operation and its farmers. This solution was developed as a whole supply chain to reduce nutrient run off into local watercourses, so as to off-set the output of the new effluent plant.

In essence, the producers involved agreed to a compliance scheme, designed to reduce the levels of nutrient offload entering water courses in the vicinity of their farms. This, in turn allowed the new water treatment at the processing plant to operate at existing discharge levels, without the need for a new site permit.

“We seek to ensure that our advice is evidenced based, clear and consistent to help determining bodies make environmentally informed decisions”

The development of Pen y Cymoedd wind farm was the final sustainable planning example profiled by Roberts at the conference. This is a 76 turbine development located on land managed by Natural Resources Wales in the Port Talbot area. Once operational, the project will generate enough electricity to meet the domestic need of 140,000 homes per annum. At its heart is the full cooperation of all local communities.

“We have committed to establishing a habitat improvement plan, as a key focus for the project,” he said. “Also included is a new £35 million cycle track. Pen y Cymoedd is an excellent example of how an economic project can be developed to meet the full environmental, social and health needs of the impacted communities.

“We are also looking at a range of solar, hydro and other energy projects in Wales from the point of view of creating greater conservation value.”

Looking to the future, Natural Resources Wales is seeking to develop a range of Area Statements, covering its entire catchment area. “These will be based on river catchment areas,” said Roberts. “Crucially, these will focus on what environmental improvements can be driven forward to the benefit of the economy and every local community in Wales.”

From climate breakdown to a just energy transition in Northern Ireland

Circular economy: Compost critical to the future of soil health

Single-use plastics and the circular economy

December 2018
Back to top button
Close
By continuing to browse this site you are agreeing to our use of cookies.
Close