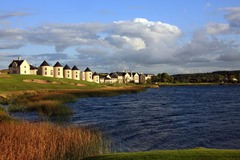 Tourism statistics indicate signs of growth but also a drop in visitors from the Republic.

Northern Ireland’s latest available tourism statistics cover the full calendar year of 2013 and show a general improvement from the same period in the previous year.

From the previous year, the total number of overnight trips (by local and external tourists) had increased by 2 per cent and overall tourism spending by 5 per cent. External visitor numbers were up by 6 per cent and their spending rose by 9 per cent.

Among external visitors, the increase for visits to friends and relatives (14 per cent) was much greater than that for business visits (6 per cent) while the number of holiday-makers was unchanged. A 7 per cent fall in visitors from the Republic of Ireland was outweighed by a 13 per cent increase in tourists from Britain but still represents a significant reduction in our closest market. This may be explained by people in the Republic ‘staycationing’ and welcoming visitors to The Gathering or the absence of a major advertising campaign for that market.

Derry’s year as UK City of Culture, the World Police and Fire Games, the all-Ireland Fleadh and the Backin’ Belfast campaign are seen as positive factors which promoted tourism over the course of 2013. Good weather in the summer may also have contributed to the growth.

A further five cruise ships and 1,700 passengers docked at Derry, down from eight ships and 4,700 people in January-September 2012.

Estimated visitor spend increased from £689 million to £723 million. This included £273 million spent by visitors from Great Britain, £249 million from southern visitors and £201 million from overseas tourists.

Tourism statistics are compiled by extrapolating trends from a number of surveys and therefore have some margin for error. The Northern Ireland Passenger Survey uses face-to-face interviews at ports and airports. It has a sample size of 68,000 but the number of valid responses is typically 16,000. The Northern Ireland Statistics and Research Agency does highlight where its figures are based on very small sample sizes.

Visitors from the Republic are counted by the Irish Central Statistics Office’s monthly Household Travel Survey with an average sample size of 4,600 although the response rate is closer to 2,000 households.