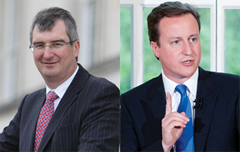 Peter Cheney reviews the latest turn in the relationship.

Despite the ending of the UCUNF pact, the Conservatives and Ulster Unionists will keep up their links. A free run for the UUP in next May’s Assembly poll was the main result from talks between the parties in December.

• Only the UUP will put up Assembly election candidates;

• UUP and Conservative candidates will stand separately in local elections;

• Any future UUP MPs or MEPs will take the Conservative whip (as Jim Nicholson does at present).

Assembly and local elections take place on 5 May. The next European election is due in June 2014, with a general election predicted to follow in spring 2015. The previous UCUNF pact covered only Westminster and European polls.

These proposals could allow David Cameron to technically present himself as PM for the whole UK without involving the Tories too much in complicated local politics. A Fermanagh resident could join the party and stand for their local council, but would have to go to Britain if they had higher political ambitions. They went to the UUP executive for approval, after which they would be considered by the Conservative Party board.

Tories still see the UUP as their closest counterpart in Northern Ireland. While the two parties may differ over devolved matters, they could share a common national view on non-devolved points e.g. national debt and defence. This would restore relations at Westminster to their status before 1972, with the UUP effectively becoming a ‘franchise’ of the Conservatives.

Irwin Armstrong resigned as local Conservative Party Chairman following the announcement, claiming he had not been consulted.

Ballymena councillor Deirdre Nelson joined the Conservatives from the DUP in June 2009 but quit in March 2010 following the Hatfield House talks. She had intended to rejoin, following talks with Armstrong, but has decided to leave politics.

UCUNF was a “disaster”, in her view. While she had good friends in the UUP, Nelson found: “There are elements within the Ulster Unionist Party that I do not believe sit in with a vision of a Northern Ireland at ease with itself, with a shared future strategy, with a belief that you cannot go back to the past.”

At present, the Conservatives have one councillor (Peter Bowles on Down District Council) while the UUP has 111.

Outside England, the party has been most successful in Wales, with a 26.1 per cent vote share last May. Separately, the Sanderson review into the Scottish Conservatives recommends that they contest every local government seat in Scotland.