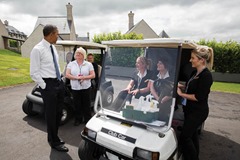 The world came to Fermanagh in June, in an unprecedented opportunity for Northern Ireland. Peter Cheney looks at some of the lesser known scenes and analyses the results from the G8 summit.

With an eye on history, Lyndon Johnson was the first US President to appoint an official presidential photographer.

Yoichi R Okamoto had unprecedented access to the Oval Office and Pete Souza, his present-day successor, likewise had the inside story on this year’s G8 summit at Lough Erne.

“The job,” he has said, “is all about access and trust, and if you have both of those you’re going to make interesting, historic pictures.”

Souza was one of Ronald Reagan’s official photographers – for five and half years – before freelancing for the National Geographic. He then took up a Washington posting for the Chicago Tribune, which happened to be Obama’s home paper. The Tribune had exclusive access to his rise to power.

A native of South Dartmouth, Massachusetts, Souza’s career started on Kansas papers in the 1970s. Official business has been interspersed with family occasions. Souza paid a final tribute to Reagan as by covering his funeral in 2004. He married his fiancée, Patti Lease, at a quiet ceremony in the Rose Garden this October.

Souza, though, is sometimes the only photographer (or indeed media professional) at news events featuring the President. He will always get the right angle for the President and his staff but his work, by definition, will not tell the full story. 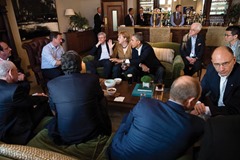 A 33-page leaders’ communiqué was released at the end of the summit. Key results included the launch of negotiations on EU-US and EU-Japan free trade agreements and the publication of an open data charter.

Open data can show how and where public money is spent and enable people to make better choices about the services they use. Data will be expected to be released “by default” at all levels of government, therefore including the Northern Ireland Executive. Datasets should cover transaction spend, contracts, hospitality and gifts.

The automatic exchange of tax information between governments should be the new global standard.

The leaders backed a banking union for the euro zone which will have cross-border consequences for Northern Ireland. They pledged to “refrain from and roll back protectionist measures”.

Governments would amend business regulations to make sure that companies knew who owned them and to open up land transactions to more scrutiny. On climate change, the G8 backs calls for a new international deal by 2015, to come into force from 2020. Most environmentalists see this as too little, too late. 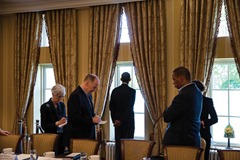 Terrorism is condemned “in all its forms and manifestations, and wherever it occurs.” Support for weak governments in Somalia and the Sahel is affirmed e.g. through military training. An Afghan-led reconciliation process is also affirmed.

A diplomatic conference on ending the Syrian civil war was “strongly” supported. This was scheduled for mid-November. The leaders saw the potential for better relations with the new Iranian President but sternly warned North Korea to abandon its nuclear programme. The next G8 summit will take place in the Russian resort of Sochi on 4-5 June 2014.

Recalling a year of lobbying, IF Campaign Chair David Thomas pointed out that an additional £4.1 billion was pledged by governments and donors to tackle malnutrition.

“G8 leaders also agreed specific steps that ought to happen in order to tackle tax dodging and land grabs,” he added, “but unfortunately did not say how these would be enforced or offer a clear timeline. We must hold G8 leaders to account on their promises. The Lough Erne declaration left major unfinished business, but change takes time and we’ve made a great start.”