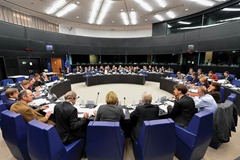 Most MEPs will join a group after their election to the European Parliament, with the groups covering a range of views on the political spectrum.

Conservative and federalist, the EPP was founded in 1976 and has been the largest group since 1999. It now has 274 out of the current 766 seats. Members include Fine Gael, the German Christian Democrats and the French Gaullists. The more Eurosceptic UK Conservatives left in 2009. Current Commission President José Manuel Barroso is also affiliated to the EPP.

Progressive Alliance of Socialists and Democrats

The group is the Party of European Socialists’ branch in the European Parliament, with 194 seats. A socialist group has sat in the Parliament and its predecessors since 1953. British and Irish Labour MEPs sit in the group. Electoral support for the group’s parties has been slowly declining since 1994. Its former leader, Martin Schulz, is now European Parliament President.

Alliance of Liberals and Democrats for Europe

The ALDE is strongly federalist and has existed in various formats since 1976. With 85 seats, it includes the Liberal Democrats and Fianna Fáil although the latter party’s conservative views have sometimes caused tensions with fellow members. The group’s share of the vote has remained largely unchanged since 2004.

Formed in 1999, the 58-strong group is dominated by the 45 Green MEPs, which include two from England. The majority of Green MEPs are German or French. The European Free Alliance is an amalgam of moderate nationalist parties such as the SNP and Plaid Cymru.

David Cameron’s allies are mainly from the Czech Republic and Poland. The ECR is centre-right but differs from the EPP by opposing federalism. Ulster Unionist Jim Nicholson sits as part of the group although he is also competing with local Conservative candidate Mark Brotherston. It has 57 MEPs.

Europe of Freedom and Democracy

Launched in 2009, the EFD comprises Eurosceptic parties such as UKIP and Italy’s Northern League. Its members’ ideologies vary but are generally right-wing and hostile to the EU. The EFD gives its members considerable autonomy and its membership (currently 31) frequently changes with defections to and from the group.

These are the 32 MEPs who are sit outside the groups. DUP MEP Diane Dodds represents their interests as an observer at the Conference of Presidents. They are generally right-wing and sometimes far-right e.g. the BNP and the French Front Nationale. Far-right parties would prefer to set up their own group but lack the numbers to do so.