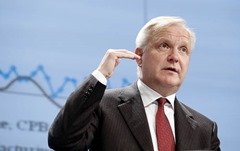 Peter Cheney looks at how the European Commission has a say in domestic policy through the European semester process and the implications for how national governments make decisions.

At face value, housing and childcare appear to be responsibilities for national or regional governments rather than the European Commission. Its officials, though, are recommending policies in these areas through the European semester process.

The semester (so called because it takes place over eight or nine months) aims to ensure consistency in economic and fiscal policy. The process was introduced in 2010, at the height of the euro zone crisis, and its first ‘cycle’ took place in 2011. When a member state has come out of a bail-out programme, the Commission sees the semester process as ‘programme light’ as it allows officials to continue to influence domestic policy.

The process is overseen by Commission President José Manuel Barroso with input from three other commissioners:

The process (see table) begins in November each year when the Commission produces its annual growth survey. The Commission may also carry out a more thorough review if a country appears to be heading towards a deficit.

The most recent annual growth survey confirmed that a “modest and fragile” recovery was taking place. It noted that governments in the euro zone member states now have to submit their budgets to the Commission before presenting them to national parliaments and will soon be part of a banking union.

The survey set out five broad priorities for Europe:

• restoring lending to the economy;

• tackling unemployment and the social consequences of the crisis; and

These recommendations were then discussed by the Council of Ministers earlier this year.

A series of ministerial discussions, involving all member states, took place in Brussels. The European Parliament also discussed the survey and takes a particular interest in employment matters.

Each March, heads of government meet in the European Council. They discuss the proposals made so far in the process and set the strategic priorities for the EU over the next year. The March 2014 European Council’s priorities included:

• the building up of a strong and competitive industrial base;

• completing the internal market in goods and services;

The process then moved on and focused on each of the 28 member states.

The documents include general progress reports, including what action has been taken by the devolved administrations. For example, the UK’s national reform programme refers to the Northern Ireland Executive’s performance in house-building and creating apprenticeships.

The Commission therefore has a detailed – and probably unique – understanding of government policy across Europe. Over the next month, its officials scrutinise these national plans and draft up ‘country-specific recommendations’.

1. reduce the deficit by prioritising capital expenditure, broadening the tax base, improving access to finance for SMEs, and investing in skills and infrastructure;

3. reduce the number of young people with low basic skills, increase the number of apprenticeships, and increasingly match skills with employers’ needs;

The Republic of Ireland received seven recommendations, following on from the bail-out. These went into more detail than those for the UK and included reduced spending on medical prescriptions, more workplace training for young people, better childcare, ambitious targets for clearing up mortgage arrears, and cuts to legal aid.

The recommendations were discussed by the Council of Ministers and the final versions were then adopted at the next European Council in June. Progress will be reviewed at the end of the year and the semester will then start again.

The Commission maintains that the process is necessary because over-spending by national governments caused the financial crisis. The main difficulty, from a democratic viewpoint, is that the Commission is unelected but is allowed a formal say in areas traditionally controlled by elected governments.

Member states can disregard the recommendations but the Commission’s influence means that it can put pressure on governments (especially in smaller countries) to follow a European line.

UUP MEP Jim Nicholson expects that the real impact of the semester will only be felt after the recession has abated. “Instinctively, I am sceptical of the process as I believe that the economic affairs of member states should be the preserve of member states,” he remarked. Nicholson would like MEPs to have a greater say on the survey and recommendations before they are finalised.

A Foreign and Commonwealth Office spokesman described the semester as “playing an important role in promoting growth and competitiveness.”

The UK Government supports its overall objectives but he added that there was “a risk of the semester becoming a victim of its own success.”

For example, some federalists want to expand the semester to include judicial reform as it can indirectly affect economic policy. “This could upset the consensus around growth, undermine the semester ‘brand’ and ultimately reduce its chances of success,” he added. Britain sees national ownership of structural reforms and allowing member states “leeway to implement” as essential for its success.

Irish Government Minister Paschal Donohoe is more supportive although the Republic did reject a recommendation this year for another €2 billion budget adjustment.

“The process is about making changes in how we govern ourselves and making sure others do the same,” Donohoe told agendaNi. “It will safeguard the progress we have made in recent years in pulling Europe back from the brink and towards a more inclusive prosperity.”

However, he also saw a needed for “sufficient time” to be built into the process so that countries and Commission officials can work together properly and “deliver on our shared goals and objectives.”