A research paper published by the Department of the Economy on the economic effects of the Ireland/Northern Ireland Protocol prior to the agreement of the Brexit deal gives the public a view of the roads taken and not taken.

The implementation of the Protocol will have a serious impact on trade in Northern Ireland as it retains the EU’s customs rules and regulatory standards while Britain potentially eschews them, meaning these standards and regulations will now be applied to trade between Britain and Northern Ireland.

Britain accounts for 60 per cent of Northern Ireland’s goods purchases and 43 per cent of its sales, the Republic of Ireland accounts for 14 per cent of purchases and 20 per cent of sales, and the rest of the EU accounts for 14 per cent of both sales and purchases. The Department, whose minister Diane Dodds campaigned for Brexit, notes that the Protocol “will have a potentially significant impact on the purchase of goods from Great Britain” and that the impact on Northern Ireland businesses looking to sell into the British market “is expected to be much more contained given the UK Government’s ongoing commitment to unfettered access to the Great Britain market”. Unfettered access, however, does come with the warning that associated fluctuations in price will “have long lasting implications for jobs, consumer choice and prices more generally”.

The three scenarios laid out in the report are: Scenario one, the scenario that has since come to pass, where the UK and EU agree to a free trade agreement, with the Protocol remaining in place, where it is assumed all tariffs are eliminated for modelling purposes, although the paper recognises that “in reality there may be a smaller number of tariffs remaining for ‘at risk’ goods arriving to Northern Ireland from Great Britain”; Scenario two, where the UK would trade with the EU on WTO terms with non-tariff measures only, and the Protocol would have remained in place, resulting in “more onerous checks and delays relating to customs and regulations on trade flows between the UK and EU/NI”; and Scenario three included the no deal of Scenario two, but examined the consequences of Northern Ireland having to apply all EU customs tariffs on imports from Britain.

Under the agreement of a free trade agreement between the UK and the EU, with Northern Ireland remaining under the Protocol as has now come to pass, the analysis finds that there will be a “material adverse long-term impact in the Northern Ireland economy”. GDP will be 1.7 per cent lower than would be otherwise expected and imports from Britain would fall by 5.6 per cent. Exports to the rest of the world from Northern Ireland, the Republic and EU included, would be reduced by 5.3 per cent. Employment levels would fall by 1.1 per cent, which equates to 10,000 jobs based on 2018 employment levels.

“Under the agreement of a free trade agreement between the UK and the EU, with Northern Ireland remaining under the Protocol, the analysis finds that there will be a “material adverse long-term impact in the Northern Ireland economy”. GDP will be 1.7 per cent lower than would be otherwise expected and imports from Britain would fall by 5.6 per cent.”

Under this new reality, all sectors of the economy are expected to suffer decreases in both gross value added (GVA) and employment numbers. Food and drink is forecast to be the hardest hot sector in this scenario, with a 5.5 per cent reduction in GVA and the loss of 1,200 jobs. Agriculture would also be significantly affected, with GVA falling by just under 5 per cent and total employment numbers also decreasing by just over 4 per cent.

The forecast for Scenario two, where the UK and EU’s relations would have reverted to WTO rules with non-tariff measures only, would have seen the Northern Ireland economy “be impacted in broadly the same manner [to Scenario one] albeit more significantly”. As with the free trade agreement, imports from the rest of the world would have increased, this time by 2.6 per cent, a stat that “highlights the likely reorientation of some supply chains to make up for the reduction in regional imports from Great Britain”.

All sectors would have once again been negatively impacted in terms of both GVA and employment numbers. Again, food and drink and agriculture would have been worst affected, with GVA falling in these sectors by 7 per cent and 6 per cent respectively and 3,000 jobs lost between the two sectors. Overall, 12,300 jobs were projected to be lost in the long term under this scenario. 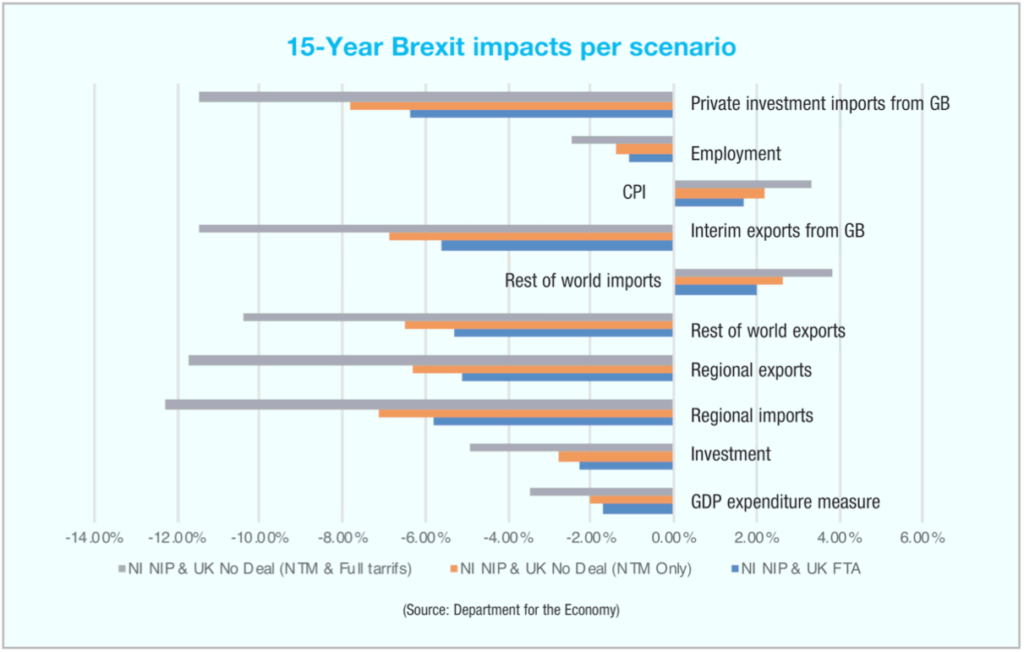 In this scenario, “it would be reasonable to expect a more onerous system of checks and standards”, which would have disproportionately affected agricultural produce, as well as food and drink products. It is also noted that more onerous trade friction, e.g., 22 per cent rather than the 10 per cent used in the analysis, would have resulted in GDP falling 2.7 per cent in the long term and led to 17,000 less jobs than originally forecast being available.

Scenario three, where no deal reached between the UK and the EU would have led to full tariffs being implemented, would have “significantly increase[d] the negative overall economic impact of a no deal scenario as the GDP impact is increased by approximately 75 per cent”. This scenario would have also meant 23,000 fewer jobs over the long term.

The Protocol, the report concludes, will “represent a significant shock to the Northern Ireland economy” regardless of the path taken. With Scenario one now chosen, the damage wrought will only become clear over time.