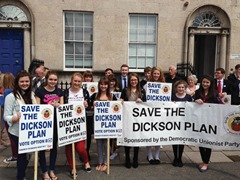 Although he denies that they are his proposals – he points out that they are the views of the Southern Education and Library Board – Education Minister John O’Dowd has lent his support to a radical shake-up of schools in the Craigavon area which will effectively put an end to the area’s unique Dickson Plan, at least as currently configured.

There is much interest in the ‘Dickson Plan’ among educationalists and policy-makers beyond the Craigavon area.

Over the last few years the biggest public debate in education has been about ending academic selection at age 11. When Martin McGuinness and his ministerial successor Caitríona Ruane famously scrapped the 11-plus examination, it was quickly replaced by two unregulated selection tests, and academic selection at the age of 11 continued much as before.

In the ongoing public debate, advocates of ending academic selection have often pointed to the success of the Dickson Plan in the Craigavon area which offered a two-tier system of junior and senior high schools, a system which effectively deferred selection to age 14. The three grammar schools in the area could only take in pupils from age 14.

Some advocates pointed to the fact that Dickson was working well in Craigavon: the schools were content, children were no longer being branded failures at the tender age of 11, and perhaps, therefore, Dickson was a suitable model to be rolled out across all of Northern Ireland.

Dickson was not supported by everyone locally and did not actually eliminate selection in Craigavon. Many parents voted with their feet and sent their 11-year olds to the independent selection tests and then on to grammar schools outside the Dickson Plan area. The system, though, is generally considered to have worked well since its introduction in 1968.

However, Minister O’Dowd is less impressed. He points to the fact that overall academic attainment on average is lower in the Dickson Plan area than in the SELB area or in Northern Ireland as a whole. Defenders of Dickson claim the Minister is not comparing like with like, and not taking account of the significant numbers of pupils who live in the Dickson area but attend grammar schools outside it.

The current proposals would merge the existing grammar schools in Lurgan and Portadown with the senior high in each town but might permit a form of academic ‘streaming’. For the governors and principals of Lurgan and Portadown Colleges, it flies in the face of public opinion locally, is a direct ideologically-motivated attack on grammar schools, and an attempt to impose the ‘failed’ Great Britain-style comprehensive education model.

A major political campaign is under way to save the Dickson Plan – supported by the DUP and several other Parties, and spearheaded by local DUP MLA Stephen Moutray.

The outcome of this tussle will prove interesting as it may have implications for policy generally. Interestingly, Ulster Unionist Party education spokesman Danny Kinahan believes that despite all the ballyhoo a deal has already been done between the DUP and Sinn Féin which will see a transition from ‘selecting’ to ‘streaming’ within larger collegiate schools. Kinahan warns: “I don’t think people across Northern Ireland have yet realised what will be coming at them out of Craigavon.”

If Kinahan is wrong and there is no deal done between the big two parties, then Minister O’Dowd’s proposals – significant and controversial – may have to return for final decision to the Northern Ireland Executive where the DUP has the power to block them. Watch this space.