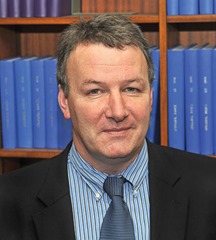 Seamus Kennedy talks to Owen McQuade about AFBI’s international development and its role in supporting the agri-food sector’s Going for Growth strategy.

The Agri-Food and Biosciences Institute (AFBI) is an organisation of approximately 800 staff with two-thirds of its funding coming from the Department of Agriculture and Rural Development and the remaining third, £19 million this year, from a wide variety of commercial and R&D contracts.

“That income, together with grant in aid, allows us to maintain our scientific capacity,” Chief Executive Seamus Kennedy explains. “We would be a much smaller organisation if we had not grown that external income from around £2 million before AFBI was formed to £19 million for the current financial year.”

Kennedy highlights the importance of this innovation resource in supporting the sector’s emergency response to crises: “Participation in R&D funded by DARD and other organisations allows our staff to develop the most modern skills and technologies for application to our statutory and emergency response work. If we didn’t have the staff doing R&D and participating in international research consortia, we would not have the leading edge skills required to provide an effective, local response to animal and plant health, food chain, environmental and other emergencies.”

Kennedy explains that although AFBI is a public sector organisation, it is operating in a commercial environment. “We must conform to all the public sector finance and governance rules and, at the same time, operate one-third of our business almost like a commercial organisation,” he remarks. “While maximising the skills and expertise of the people in AFBI,” Kennedy elaborates, “winning competitive external R&D leverages in additional funding and it is only by continuing to deliver high quality science that our staff can continue as partners in leading international agri-food research networks.”

The institute’s scientists have done well in selling their skills not just locally but throughout the world, having contracts with organisations in a range of countries. Last year, AFBI appointed a business development executive in North America who works from the Northern Ireland Bureau in Washington. He has done “tremendous work” in establishing links with a range of government bodies and commercial organisations.

Kennedy adds that last November, AFBI organised a research conference which was hosted by the US Department of Agriculture’s Agricultural Research Service in Beltsville, Maryland. It brought together researchers from AFBI, the United States, Canada and Teagasc from the Republic of Ireland.

“The objective of the event was to identify areas for scientific collaboration and there is now quite active follow-up work going on in a number of areas,” he remarks. “The main theme for the event was sustainable intensification, which is the way forward for the agricultural sector in Northern Ireland because we have to produce more and increase competitiveness while protecting the environment. The issues are common to North America and to Ireland, North and South, so the more we can collaborate, the more cost-effective will be the research work.”

The Horizon 2020 fund officially opens this year with €70 billion of funding for research across the EU. Of that, €3 billion is allocated for agriculture. Northern Ireland has established a number of contact points for Horizon 2020 and the point person for agri-food research is based at AFBI. AFBI has been successful in winning competitive R&D funding from previous European R&D frameworks but its aim is to “greatly increase the level of draw-down over the next few years.” The appointment of the DARD-funded contact point for agri-food to AFBI “will assist the local industry, universities and AFBI in achieving this aim.”

He continues: “We have been lagging behind other member states, including Ireland. The only way to get this funding is to be doing international standard R&D to begin with, publishing that research in the top journals internationally, and thereby gaining access to international research consortia. AFBI has been very successful at this. We are in the process of working with partners in putting together a number of bids for Horizon 2020 funding on topics that are complementary to DARD’s research priorities.”

AFBI has met with the Chair of the Agri-Food Strategy Board, Tony O’Neill, and its board will meet their board in the near future. Discussing the Going for Growth strategy, he comments that there are 118 recommendations in the strategy to which AFBI can provide support.

“This is largely because of the broad integrated remit of multi-disciplinary AFBI that covers animal health, plant health, food innovation, food safety, marine and freshwater fisheries, the environment and agricultural and rural economics,” Kennedy says. “We are active in all livestock sectors and in grasslands and cereals. I believe AFBI has a very important role in helping the industry achieve the targets set out in Going for Growth.”

Sustainable intensification, he reaffirms, is the only way that this can be done. Although good progress has been made, Northern Ireland still has major problems with phosphorous in its waterways and so, its farmers will have to produce more food but using less phosphorous and preventing excess phosphorous ending up in water streams. There are EU requirements to do so.

“We also have to control greenhouse gas emissions, both from livestock and the soil,” Kennedy adds. “The only sustainable way we can produce more food is to reduce the intensity of the greenhouse gases – reducing the amount of greenhouse gases per litre of milk or per kilogramme of meat that is produced. Northern Ireland’s highly efficient agricultural systems are well placed to do so but we must continue to invest in research and innovation to increase output and competitiveness in a sustainable manner.”

Much of AFBI’s research is increasingly focused on the concept of sustainable intensification, including animal health. If an animal is diseased, it is less productive and still produces greenhouse gases but for less milk or meat.

“So across a broad front there are a number of areas where we can support the growth of the industry,” Kennedy concludes. “The challenge will be around sustainable intensification – producing more from less, with a smaller environmental footprint.”