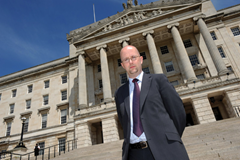 The public needs to see the Assembly as its own, Director of Engagement Gareth McGrath says as he tells Peter Cheney what this means in practice.

“The word engagement, I am increasingly falling out of love with. I think it’s more and more reaching out to people,” Gareth McGrath remarks. As the Assembly’s director of that subject, he oversees its education, research, library and communication work.

In essence, the Assembly Commission and its secretariat want people to get the information that they need about the Assembly “in a format, at a time, in a way that suits their purpose”. MLAs and committees should also be recognised for “the good job that they do”.

Public cynicism about politics reached a peak during the 2009 Westminster expenses scandal and its after-effects will continue well into the future. Many people think MLAs sit up at Stormont on Monday and Tuesday but take the rest of the week off.

In contrast, the committees are “meeting day and daily” as the Assembly counts down to dissolution, on 24 March. Supporting that work, through a team of researchers and the communications office, is the largest part of his job.

Outreach involves both welcoming people into Parliament Buildings and going out to explain the Assembly’s role.

A “huge range of events” take place at the Assembly every year, attracting 70,000 visitors.

“One of my roles is to ensure that all of those visitors get a very good, transparent experience of what happens in this building,” he comments, “and that they understand that it’s their Parliament Buildings, and it is open and accessible to them.”

Research suggests that, broadly speaking, three groups are ‘hard to reach’: young people, women and people on lower incomes. The Assembly does not focus everything on those groups but factors them in when it plans its outreach.

Education is a major theme, with programmes for young people of all ages from primary school to university level. This can involve a tour and also a workshop, where young people and teachers can meet MLAs from their constituency. MLAs are “incredibly supportive” of the education service and McGrath takes great pride in it.

“We just don’t wait for people to come to us in Parliament Buildings. We also get out,” he adds. Education staff focus on ‘hub schools’, which can be used to run programmes for schoolchildren in that area. They have also visited Hydebank Young Offenders’ Centre and the Assembly now has its own youth panel.

Other examples include an outreach officer who builds up links with women’s groups, or a day-long session with community groups at Derry’s Magee campus; this involved workshops on how to engage with the Assembly, its committees and members.

McGrath sees this is a “long-term investment” as people’s perceptions will change slowly. He also realises that those perceptions can change for the worse overnight, as happened with the expenses scandal.

Visitor numbers make good reading but his staff are keen to avoid a numbers game. They want to gauge how people’s perceptions of how they engage with the Assembly change over time e.g. a questionnaire distributed at the Magee event will be followed up in six months’ time.

The amount of broadcast and print media coverage is another useful indicator. The Assembly’s rules on press access were widely seen as too strict back in 2007 but relaxing these has “helped to improve their appetite” for reporting Stormont.

Putting cameras into committee rooms involved a relatively small investment which has clearly been successful. “It’s really pleasing to me that week in, week out, I’m now seeing coverage of committee meetings on the news,” McGrath notes, although he refuses to take direct credit for this.

He accepts that Stormont is, and will always be, ‘out of town’ compared to other assemblies or parliaments, and also distant from the west and south west of the province.

As a former Omagh man, he commissioned research to find out whether schools in those areas used the education programme as much as those in greater Belfast. Its results showed “pockets of huge uptake relatively remote from Parliament Buildings … yet there are schools within a couple of miles from here who have never been.

This re-emphasises the importance of the Assembly getting out and about as much as it can. However, even if people do not come up the hill, they can still follow its proceedings online or on TV.

It’s worth noting that the Assembly has never reached a full term before. With a “frenetic amount of activity all day every day”, it is nearing 24 March with a large volume of legislation still on the agenda.

After dissolution, Parliament Buildings will have a “relatively quiet” period of purdah as it finishes up this mandate and prepares for the next one. The new House will then gather, by 16 May at the latest, to choose select ministers and committees.

“This year, it will be well into July before things begin to settle down,” he predicts.

Financially, the Assembly faces an 18.6 per cent cut in its running costs over the next four years, starting from this April. The Commission has taken the lead on this, so that the Assembly is no different from the rest of the public sector, but it will have a major impact.

All staff have an “incredible” commitment to making the Assembly work, he states, adding in conclusion: “I think if the public understood the amount of work that members do, and the work that the secretariat do to support members, I think there would be a lot less cynicism.”

The Assembly website is due for a re-launch this September after years of complaints about poor presentation. Despite staff providing an “enormous amount of information” for its pages, the end result is often hard to navigate.

Its education site is also being revamped with the help of the Council for the Curriculum, Examinations and Assessment (CCEA), which McGrath strongly welcomes: “There will be a sea-change in the way that people of all ages and all abilities will be able to access and interact with their Assembly.”

A former research chemist and management consultant, Gareth joined the Assembly from Deloitte in 2008. “If there was a dream job for me that I would have seen advertised, it would be this one,” he comments. His other interests include the TV shows Boardwalk Empire and the West Wing, walking and running.

“I am a huge fan of everything George Orwell has ever written,” he adds, putting that down to his Christian Brothers education.