The number of social enterprise organisations in Northern Ireland has almost doubled in the last five years, the amount of employees has more than doubled and the average combined turnover has risen by £300 million, presenting a resilient and growing sector with the potential to a re-balancing of Northern Ireland’s economy.

The return of the Executive and enhanced finances from Westminster brought with it a broader conversation around Northern Ireland’s dependence on Treasury funding and the absence of self-sufficiency in regards to revenue raising. A key tenet of the New Decade, New Approach deal is the implication that Northern Ireland must seek to change how it manages and delivers on its budgetary responsibilities.

The direct economic benefit of the social enterprise sector is estimated to be some £294 million Gross Value Added (GVA). An estimated 14,450 jobs exist in the social enterprise sector and some £385 million worth of wages are generated. The sector has undoubtedly grown and diversified since 2013, the last time a comprehensive study was carried out.

The sector has seen an upturn in start-ups. 40 per cent of organisations surveyed for the report were trading for less than five years and one quarter for less than two years. However, it is also exhibiting the commercial potential of social enterprise organisations. Three quarters of these organisations made a profit in the last financial year and over 60 per cent recorded an increase in turnover when compared with the previous 12 months.

Historically, social enterprise activity has concentrated in the services of education, employment and skills, and business support and consultancy. However, the report indicates a noticeable increase in the number of social enterprises operating in health care, social care and at greater levels in education. Additionally, activity in retail activity is “significant” indicating a similar trend across the UK of diversification of income away from the public sector.

Anecdotal evidence suggests that the prevalence of volunteering in the sector has fallen since 2013 levels but the report reasons that this is due to a “more business-focussed model”.

The report stresses that the social economy’s beneficial reach is wider than economic improvement. Referring to the draft Programme for Government’s indicators it highlights delivery in terms of tackling disadvantage and deprivation. Of the social enterprises surveyed for the report, 25 per cent were operating and trading from the top 50 most deprives Super Output Areas in Northern Ireland.

However, while mirroring 2013, the percentage of those respondents identifying the ‘local community’ as the single biggest beneficiary of social enterprise activity. has fallen from 78 per cent to 65 per cent.

More than half of social enterprises reported over 50 per cent of their workforce as living in the immediate local area and when asked about recruitment, almost 60 per cent outlined an ambition to increase their number of employees. 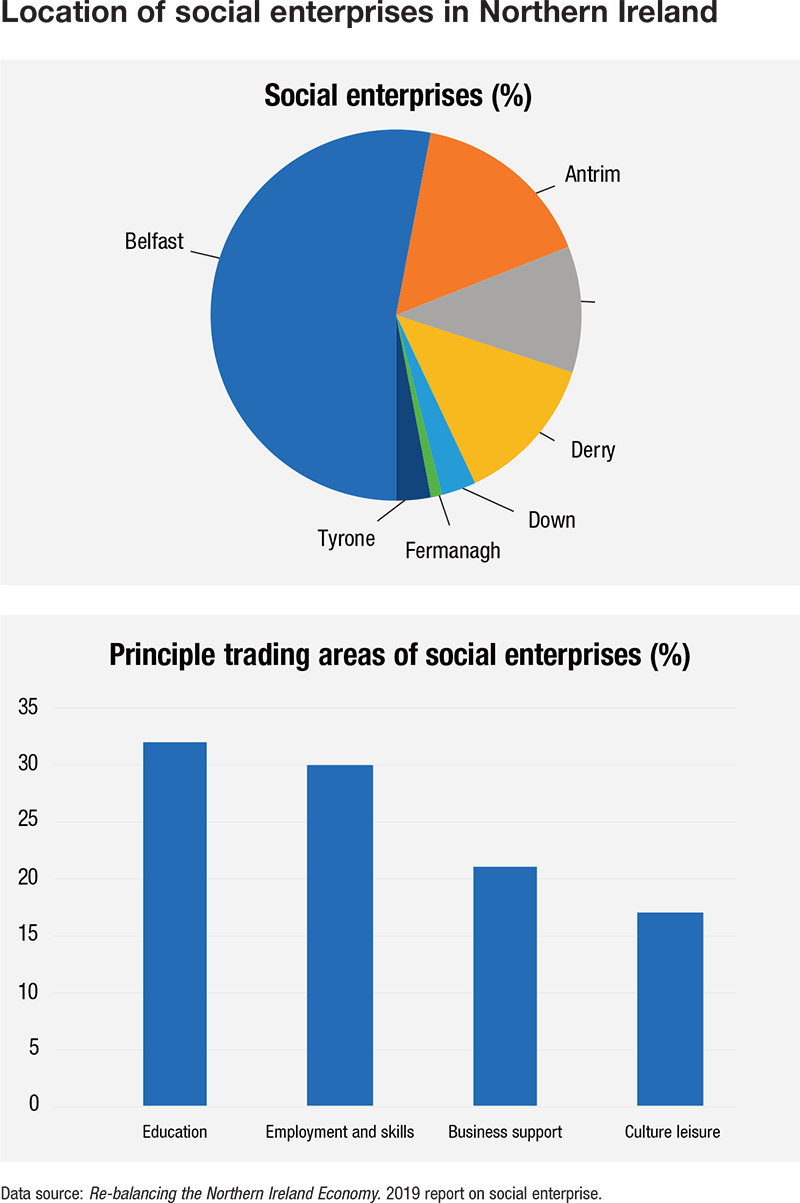 The potential for social enterprise to aid the rebalancing of Northern Ireland’s economy is reliant on the long-lobbied for Social Value Act becoming reality under the new Executive. Such an Act, already in place in other parts of the UK, would put a statutory duty on the public sector to demonstrate and maximise the social impact of its spending priorities.

However, barriers to progress have been identified. Brexit, finance and reduced funding have all been identified as the top three obstacles to sustainability and growth.

Social enterprise of the year with big plans for the future